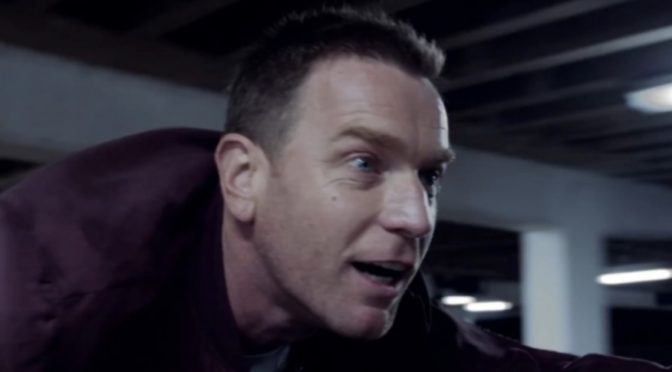 Opened as the King’s cinema in 1914, the Cameo cinema was the host of the 1996 premiere of the original TRAINSPOTTING, and 9pm on opening night in the grand, regal surroundings of Screen One is arguably the epicentre of the release of T2 TRAINSPOTTING.

The lights have dimmed, the (predictably bold red 18) BBFC title card appears, and the crowd erupts into cheers and clapping. Just as you think everyone has settled to let the sequel wash over them, a lone voice pierces the austere art deco environment: “Choose fucking life!!”

This passionate outburst is the first indication of the unique place TRAINSPOTTING occupies in Scottish pop culture. Despite the less-than-glamorised lives of the smack-addicted characters, in Scotland the film went beyond capturing the British zeitgeist to summarise the spirit of how it felt to be Scottish. The sequel somewhat captures the evolution of Scotland and its public since then.

“…in Scotland [TRAINSPOTTING] went beyond capturing the British zeitgeist to summarise the spirit of how it felt to be Scottish.”

Iconic moments litter Danny Boyle’s original adaptation of Irvine Welsh’s novel. However, the most recited segment by Scottish people of a certain age is not ‘Choose life‘ – people going radge at the Cameo notwithstanding – but Renton’s eviscerating retort to pride in the Scottish landscape: “It’s shite being Scottish!”.

This 30-second rant and the characters’ actions do much to represent Scotland’s dissatisfaction during this period in her history. Renton rails against the rule of “effete [English] arseholes” in Britain at the limp end of a run of Tory rule defined by Thatcher. It mirrors an overall feeling of “Is this the best we can do?”, as well as highlighting typical self-deprecating humour for which Scots are famous. Funnily enough, another perfect cinematic example of the latter comes from another Welsh adaptation, with FILTH‘s Bruce Robertson declaring Scots a “uniquely successful race” whilst the on-screen images poke fun at the assertion.

The whole “colonised by wankers” scenario is declared a “shite state of affairs” by Renton. Still, the character’s reaction to this brutal throwing aside of natural beauty is to meekly slink back to Leith and seek escape in a needle. In the broader sense, the nation’s acceptance of the status quo at the time – the rage at the poll tax dimmed, new fires not yet lit by the devolution referendum – mirrors the same passivity.

The public had not widely confronted the dissatisfaction head-on, but escape was collectively sought – in sport, in music, in cinema. When not shooting up, the characters in the film even do this themselves: Renton and Sick Boy debate at length the merit of Sean Connery’s later career; the video Renton switches out for Tommy’s sex tape contains the footage of Archie Gemmill’s memorable strike against the Netherlands in 1978.

“…the nation’s acceptance of the status quo at the time – the rage at the poll tax dimmed, new fires not yet lit by the devolution referendum – mirrors the same passivity [of the characters].”

T2 starts with a bold illustration of how Scotland has moved on. Footage of Johan Cruyff bamboozling Sweden in 1974 plays, not Gemmill. Instead of pounding down Princes Street with a shaved head and recollecting Connery and Gemmill, Renton pounds a treadmill in Amsterdam with a full head of hair. Whereas in 1996 Danny Boyle seemed to go to great lengths not to show Edinburgh’s tourist attractions, a grand tour has been had within the first 45 minutes of T2.

A key sequence sees Sick Boy and Renton take advantage of sectarian fools to fleece them out of money – once a sensitive black spot on the national psyche, now an embarrassment played for laughs. Begbie, eager to blame Renton or anyone else for the misfortune brought on by his psychopathic behaviour, is rejected finally by the group in T2. Beyond the literal friendships examined, the whole premise is that of embracing the past, even celebrating it, but taking responsibility for its ills and moving forward.

The focus is not upon the general stasis or lack of progress in society. Another of Renton’s more memorable lines in 1996 is that there “was no such thing as society and even if there was, I most certainly had nothing to do with it”. However, much like recent (if faltering and disingenuous at times) political history, the film’s focus is now on those left behind and how they can be a part of society, a newly energised and non-apathetic populace; Spud is the literal representation. Left behind with a paltry ill-gotten-gain from Renton, Spud has not picked himself up in the 20 years since but finally finds his voice in T2. His transformation to an Irvine Welsh avatar may seem incongruous but plays an essential part in showing that for the first time, he is heard. Even Begbie makes time to revel in Spud’s words.

“…if post-truth, post-Trump America is still trying to find a cinematic voice for the state of the nation, […], Scotland again found it in Boyle and Welsh.”

TRAINSPOTTING would make a curious double bill with 1999’s FIGHT CLUB. That particularly American rejection of late-90s consumerism and a crisis of masculinity, seen through the lens of society’s fringes, was captured in peculiarly Scottish way three years earlier by TRAINSPOTTING (perhaps ironically by a Lancastrian Boyle). However, if post-truth, post-Trump America is still trying to find a cinematic voice for the state of the nation, that same distillation of the country’s mood, Scotland again found it in Boyle and Welsh.

T2 is not the lightning in a bottle the original was, and the film is by no means perfect. In particular, it’s often too keen to revel in the iconography of the cast and crew’s bygone achievements. Some may say not unlike Scotland itself at times. However, in capturing something which illustrates how the characters have moved on, mirroring that of the society it captured so well the first time, T2 TRAINSPOTTING is a thoughtful and relevant bookend to the 20 years that separate it from the iconic original.

One thought on “Choose Looking Up Old Flames”