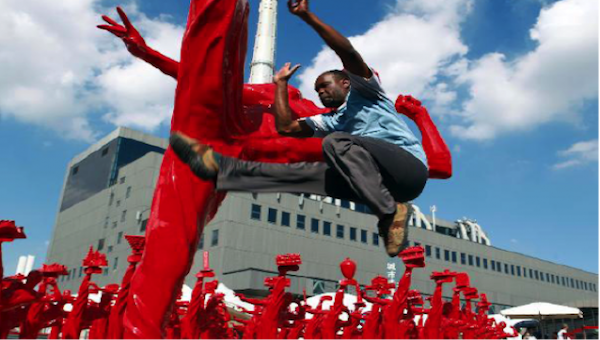 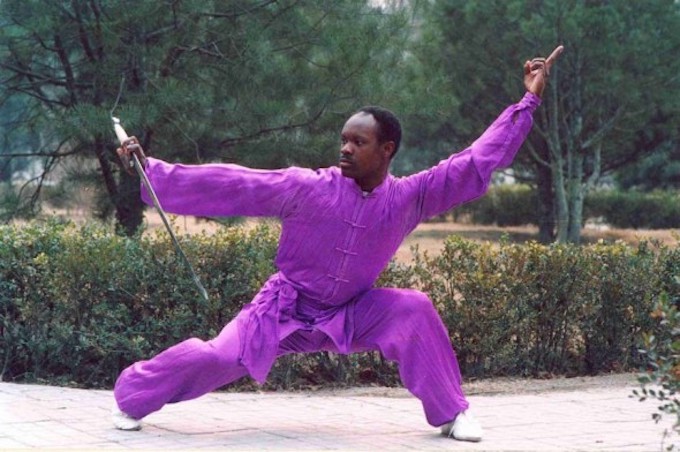 A young boy in Gabon goes to see a Bruce Lee film in the city of Libreville. At the end, he sits silently staring at the screen, his friends calling for him to go. The experience has irreparably changed something inside the boy. He wants to be that man, who was able to fly across the screen, fighting and defeating – in a beautiful type of dance – the villains. THE AFRICAN WHO WANTED TO FLY is a fascinating documentary of that boy, Luc, who followed his dreams from his small African country to become one of the most celebrated martial arts champions in China. Told through his own stories, and those of his friends and family, as well as footage from tournaments and home-made films, this is a charming and often sweet documentary that is able to catch the humanity of all those involved.

The most successful element of the film is that Luc is an engaging and highly watchable subject: he is humorous when discussing the moment he fell in love with his wife; moving when he speaks about only half of his dreams coming true, because he stands alone as the only Gabonese contestant at every tournament; mesmerising when he is practising wushu (martial arts), slowly moving in a dance-like flow on beaches and city streets. One almost feels that he was born in the wrong country, at the wrong time. He completely immerses himself in Chinese culture, to the point where he listens to Chinese music, learns the language and creates his own martial arts moves and formations (based on Bruce Lee, of course) – all before even visiting the country. It is no surprise, therefore, that the documentary takes place 31 years later, finding Luc married in Beijing, a wushu master at a sports university, with occasional forays into acting in martial arts films, and bringing to China fellow Gabonese wushu students from his home country.

…the film often subtly reveals his own struggles as an African in China. The people view him as something of an anomaly or a joke

The film seamlessly jumps between the two countries, often blurring the lines of Luc’s two homes. From an African perspective, highlighting issues of the African diaspora, the film often subtly reveals his own struggles as an African in China. The people view him as something of an anomaly or a joke – his unique, stand-out style of wushu is reported in the press as ‘drunken African man style’. When cast in films, it is also hinted that he is given villainous roles. In more overt tones, he describes being called a ‘negro’ in the streets, and the film is another startling reminder of the way Africa is portrayed in international media: war-torn and dangerous. Despite this, Luc remains positive, and indeed the respect he earns shows the inspiring power of his own perseverance and attitude.

Although the film is focused around Luc’s involvement in wushu, the film does little to explore the martial art itself, revealing no background or history to a 5000-year old practise. This perhaps might have better highlighted the skill that Luc is able to master, as well as the incongruity of an African, as Luc himself describes, ‘teaching the Chinese their own culture’. The film certainly leans towards entertainment, humour and charm over drama. There is clearly a rift between Luc and his parents, who are not interviewed – their whereabouts not explained. However, his sister describes various moments where Luc stood up against them to follow his dream – portrayed as in a comical, fun teenager-vs-parents, rather than anything deeper. This does create wonderful, crowd-pleasing cinema. The best of this is perhaps the brilliant footage of Luc making his own movies as a child, on black and white video – jumping over rocks and fighting with friends. This is paralleled with the high-tech films that he makes today, as a martial arts actor in films – finally able to fly across the movie screen. Indeed, cinema is the beginning and the end of this extraordinary tale. The ending shot aptly tilts from Luc and his friends, sitting in the cinema where this all began, up to the movie screen, which fades into their own home Kung Fu films.

THE AFRICAN WHO WANTED TO FLY brims with wit and warmth; not necessarily deep and insightful, but thoughtful and endearing. The journey of a man who wanted to fly, and eventually succeeded.