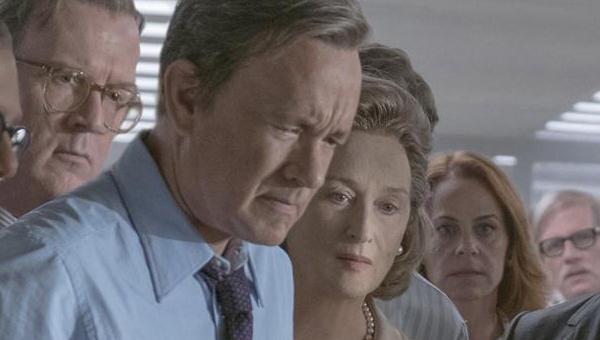 THE POST takes us on the journey of how the Pentagon Papers made it into American newspapers, and the risk that this brought to the freedom of the press. From across the pond, Spielberg brings to light the secrets and lies the White House kept about the Vietnam War, the reactions of an outraged nation and the race to publish. We get to peek into the private lives of those involved, the relationships between high ranking officials and a newsroom in chaos.

The opening shot is of soldiers in camps in the midst of the Vietnam war. An immersive taste of life on the front line sets the context of the film. The details of what actually occurred during the war were kept classified for security reasons, but they were being transparent with the public, and so a former soldier was able to leak secret reports to various newspapers, copies of which we then see strewn across a floor as journalists speed to uncover all the details. The Pentagon papers contained 3,000 pages of narrative and 4,000 pages of supporting documents, and the complexity of the situation is apparent from the offset. It could be argued that this film shows the rebirth of The Washington Post as the rebel leader fighting for freedom of speech and public accountability, as the government attempts to quash any more of the documents from being published. So many American soldiers were sent to Vietnam for an unnecessarily long time, and outrage pours not just from the public but also those journalists whose family members were involved. There is a particular focus on Meryl Streep’s character Kay Graham who is close friends with the leak, Robert McNamara. As publisher of the paper, she is in a precarious position of informing the public whilst keeping the company out of hot water. It is a subtle reminder of the fragility of friends as sources, and the rat race that is media and politics. For audience members, especially those not fully aware of the Watergate scandal and Vietnam war, the scenes which draw on first-hand anecdotes bring it back to earth.

Spielberg explores the most minute details, and the piece is intensely content heavy; he consistently balances political exposition with the human side to the story. As films from the Trump era slowly trickle out, the beacon of this film appears to be the protagonist’s morality. Streep prevents it from being dry, while Hanks batters the more strained moments with a gentle humour. Anger is subtly directed towards the fact that the government is trying to restrain information, with panning overhead shots conveying the dizziness of the situation. Playing a female publisher who has faced little scrutiny and a lifetime basking in the protection of those in the White House, Streep brings the role to life, as she fearfully steps out of her comfort zone and asserts her well-earnt dominance in a male-crowded industry. Equally, Bob Odenkirk is highly underrated as the character who locates the source on which the tedious plot rests – he brings real integrity to the role. These performances are complimented by Spielberg’s signature style of slow dolly shots into the characters’ faces as they contemplate the situation they are in.

The film is not without its faults: it uses a classic major-key fanfare at the end to imply that the protagonists and free press have won. However, the full declassification of the papers did not come about until 2011, and no one was implicated within the industry, despite this assault on the freedom of journalism. The story ends with an elegant nod to the impending Watergate scandal which took place a few years later, in keeping with the theme of the film. In an age which is muddled with ‘fake news’ reports and alternative viewpoints, it is crucial that our press is permitted to write with the intention of informing the public and forcing the accountability of our institutions. The Post does this with intensity, sincerity and laudable scrutiny.