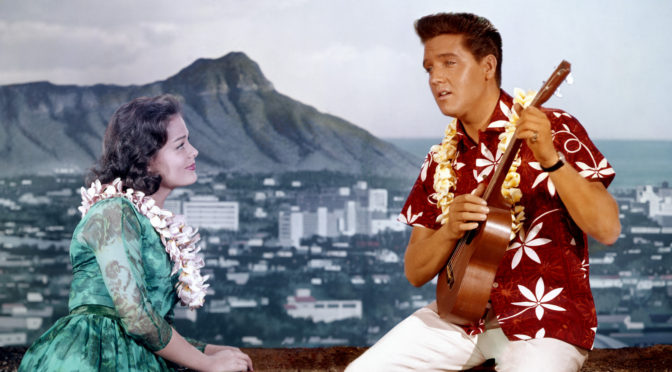 To millions around the world, Elvis Presley is known as ‘The King of Rock ‘n’ Roll’. His lifestyle was full of excess: his eccentric outfits, the dizzying live shows, and the music itself. These all depict a figure without whom the landscape of music and pop culture wouldn’t be the same. But what if he was more than that? What if music wasn’t the only medium he impacted? What if Elvis-the-Pelvis himself belonged in the same breath as Tura Satana, Christopher Lee, and Danny Trejo as a fully-fledged cult film star.

Cult films garner an audience over time due to factors such as box-office and/or critical failure, transgressive values, a certain kitsch appeal and low budgets – and the image of a certain actor can be developed directly out of these films, resulting in a unique intimacy between the star and the audience. You can’t be a cult icon without the cult.

When looking at Elvis Presley as a film actor, this intimate connection seemed to stem from his increasing detachment from the films he starred in but was tied to through the controlling influence of his infamous manager, Colonel Tom Parker. From the very beginning of his screen career, Presley wanted to establish a reputation as a serious actor and did, in fact, gain critical acclaim for his performance in KING CREOLE, often cited as his best film and finest acting role. However, his ambition of awards and critical praise was never fully realised, ironically because he became such a box-office phenomenon instead.

With his natural talent, in the form of his exceptional singing ability and his undeniable aesthetic prowess, Presley was the sole selling point of the films he appeared in. His debut feature, THE RENO BROTHERS, was even renamed LOVE ME TENDER to coincide with the song his character serenades in the film and the subsequent no. 1 single. Despite being released in November, LOVE ME TENDER finished 1956 as the twenty-third highest-grossing film of the year. Movie executives, along with Colonel Tom Parker, took note of this, and immediately sought to commodify his increasingly popular real-life persona as the rock ‘n’ roll ‘pin-up’ who seductively broke social norms by incorporating it into his film work.

“From the very beginning of his screen career, Presley wanted to establish a reputation as a serious actor and did, in fact, gain critical acclaim for his performance in KING CREOLE…”

In the features that followed, it became increasingly difficult to separate the characters Presley depicted from himself. The idea of the art being tied to the artist can work two different ways with cult stars. They may be tied to a specific role – take Bruce Campbell as Ash from the Evil Dead trilogy as an example. Or, in Presley’s case, his own stardom made it hard to see anyone other than Elvis Presley. Certainly, the fact that the songs he performed in the films were released under his own name makes the characters feel like little more than placeholders. Also, stern anti-heroes, such as convicted murderer Vince Everett in JAILHOUSE ROCK and short-tempered Danny Fisher in KING CREOLE, seemed to be constructed to mirror Presley’s already-established image that spoke to the emerging, rebellious youth of the 1950s.

The films used events in Presley’s own life to inform their narratives. In LOVING YOU, the film toys with the true controversy of his career by having the parental figures in the film disapprove of his character’s music. When Presley returned from two-years military service in 1960, his triumphant comeback to the big screen was in none other than G.I. BLUES. The distinction between Presley and the characters became almost non-existent, other than a name that nobody really remembers. And this continued throughout the sixties, where Presley was stuck in a routine of formulaic narratives and bland protagonists, who were often either entertainment-industry up-and-comers, military men, race-car drivers, or resided in Hawaii (FOLLOW THAT DREAM, BLUE HAWAII, VIVA LAS VEGAS, PARADISE, HAWAIIAN STYLE). Oh, and they always had to sing.

“When Presley tried to break the mold towards the latter stages of his film career with the 1969 film CHARRO!, the only role that did not feature him singing on screen, he was met with backlash and a subsequent drop in his movie worth.”

With cult stars, a lot of the time they are known for demonstrating one specific facet. Musicals and singing to were to Elvis Presley what Hammer Horror was to Christopher Lee (DRACULA, THE CURSE OF FRANKENSTEIN, TASTE OF FEAR). When Presley tried to break the mold towards the latter stages of his film career with the 1969 film CHARRO!, the only role that did not feature him singing on screen, he was met with backlash and a subsequent drop in his movie worth. Presley expressed his disappointment with the films and his roles within them on frequent occasions, but as long as they were making money he was powerless. He was tied to playing the constructed Elvis persona he was already living out day-to-day, and cult followers noticed this. Much like the followers of tragic cult star Judy Garland, whose charismatic on-screen performances were a stark contrast to the instability of her personal life, audiences saw contradictions between the artist and their work, allowing a greater intimacy between the star and their cult.

“The quality of the films is also key to why Presley could be considered a cult star: they were mostly critical failures.”

The quality of the films is also key to why Presley could be considered a cult star: they were mostly critical failures. There’s something morbidly fascinating about seeing a multi-platinum selling Elvis Presley star in films that were consistently panned by viewers. The idea that a film is ‘so bad it’s good’ is often foundational to its cult status. This can be seen throughout film history, from Ed Wood’s 1959 PLAN 9 FROM OUTER SPACE to Tommy Wiseau’s heinously regarded THE ROOM in 2003. Plenty of Presley’s films had the right ingredients for this, as they were mass-produced and badly reviewed in the vein of the similarly cult Beach Party movies of the same era (BEACH PARTY’, HOW TO SURF A WILD BIKINI). Add in a smidge of intertextuality, such as in G.I. BLUES when Presley’s character Tulsa Mclean discovers the record ‘Blue Suede Shoes’ on a bar jukebox, sung by a gentleman named Elvis Presley, and you’ve got yourself the perfect formula for a cult hit. This even spilled over to how the films were produced and distributed. Colonel Tom Parker’s attitude of “make em’ quick, make em’ cheap”, sacrificing the quality of the films in favor of quantity, meaning that the films grew to have their own method of distribution known as ‘The Presley Pattern’. This entailed an Elvis Presley picture being released directly to sub-run theaters, as oppose getting a premiere run in inner-city or major cinemas, meaning that they got an immediate wide release in places like drive-in theatres. As a result of this, the way audiences saw these films was just as inconsequential as the films themselves.

“…real ‘cult’ activities [related to Evlis] still happen to this day and carry on a kitsch legacy. But, does this make his films cult?”

Despite all this though, it must be acknowledged that Elvis Presley is a problematic star to define as ‘cult’, as there is the feeling that he may just be too big of a traditional star. The appeal of cult icons is that they’re often lesser-known stars whose legacy is maintained by groups of limited but devoted fans. Elvis, on the other hand, is known worldwide. This is why it is useful, on a closing point, to look at the context in modern society surrounding Presley. Not just in the sense of compilation CD’s, television reruns of his films, or DVD box sets, but in the Elvis tribute act concerts and conventions, the Ultimate Elvis Tribute Artist Contest run by Elvis Presley Enterprises Inc., and Graceland Chapel in Las Vegas, where people can be married by an ordained Presley impersonator. All these real ‘cult’ activities still happen to this day and carry on a kitsch legacy. But, does this make his films cult? Potentially, as without him the films he starred in would be lost in time…but perhaps they are?