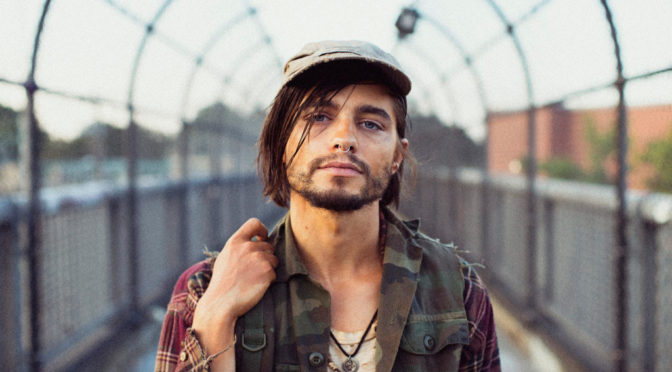 Vagrant punk Bug has had enough of his wretched life – combing the streets, living off scraps, and begging for money to spend on drugs and booze. Just as he is ready to end it all, he meets fellow lost soul Jenny and discovers a newfound fondness for life. On his twenty-first birthday, he resolves to travel the short distance home to see his long-estranged parents, only to find he may be too far gone to get there.

Andrew Gibson’s GUTTERBUG is a sweaty, bloody, dirty mosh pit of a film that pulls no punches. Themes of homelessness, drug abuse, mental health and violence all play a part in this gritty drama, and the film never once flinches from any of it. Screened at the Woods Hole Film Festival – just a short drive away from Boston, where the film was set and shot – the excitement in the air was palpable, and the film did not disappoint the packed home crowd of eager New Englanders.

Opening with a car crash scene that leaves us bursting with questions, the film launches into frenzied opening credits which set the stage for all that is to follow. A Boston punk band lays down a furious, energetic track set to clips of underground gigs, life on the streets, graffiti and other images which hint at the film’s subject matter. This raucous blast of adrenaline lingers throughout the film: the opening credits are well worth watching as a standalone piece of art in their own right.

If the set-up is excellent, the pay-off is just as good. After a leisurely introduction to Bug and his world, the film ramps up the pace, cutting back and forth between the events leading up to the accident and its aftermath. Flashbacks and flash-forwards can be a contrived and confusing story-telling device, but it is done masterfully here. Huge credit must go to the director (Andrew Gibson), screenwriter (Chris Tobin) and editor (Tim Kane) for the effortlessly natural way the narrative unfolds at such a frenetic pace. GUTTERBUG is at its best as it hurtles towards the end of Bug’s journey in the insanity of its climactic scenes.

At the centre of it all is Andrew Yackel’s performance as Bug. He’s ably supported by his two companions: ferocious but fragile Jenny (Hannah Mosqueda), and hedonistic, nihilistic anarchist Slim (Justin Pietropaolo), who give fine performances in their own right. Recognition should also be placed at the feet of the production design team, for helping bring this sweaty, stinking world to life in a way that almost emanates from the screen and into the audience’s nostrils. But it’s Bug who steals the show. Effortlessly cool and magnetic for much of the runtime, and delightfully deranged for the rest, Yackel balances Bug’s soulfulness and flaws with such skill. A truly standout performance.

A TRAINSPOTTING for the 2010s, both in subject and in quality, GUTTERBUG has “cult classic” written all over it.

GUTTERBUG screened as part of the Woods Hole Film Festival in Cape Cod, where it won both Jury and Audience awards.