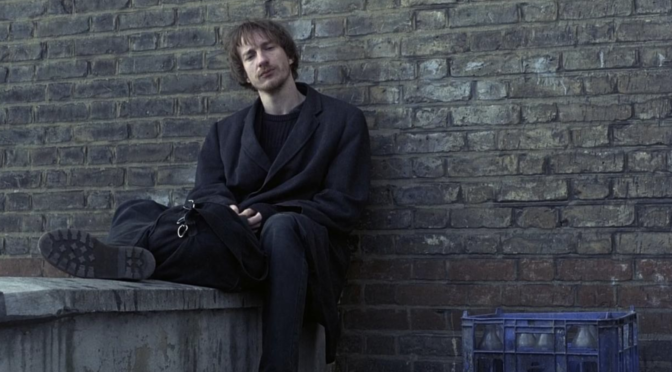 The term ‘timeless’ is thrown around in regard to film and art pretty liberally. Personally, I don’t believe in timeless art, but what I’d call ‘seasonal’ art. Every now and again, certain criteria are met and a work of art becomes as relevant as it once was, regardless of how long ago it was released. That’s very much the case with NAKED, Mike Leigh’s apathetic and nihilistic masterpiece.

Neil LaBute described NAKED as “a bleak portrait of life, but it’s infused with real humanity”. It is also a film constructed from intricate contradictions. It is devoid of plot, whilst concerning itself seemingly with everything. It is very much a film in which nothing happens because NAKED is, in an important way, entirely empty. Its streets, for the most part, are empty. Much of the ‘action’ takes place in empty, desolate stairwells. Protagonist Johnny – let’s take a moment to thank Mike Leigh for bringing the incomparable David Thewlis into the limelight – is an empty and hollow human being, and one of the single most fascinating, bizarre and awful creations of modern cinema. Someone that anyone (who isn’t a sociopath) should be terrified of ever becoming.

Johnny talks incessantly to everyone and anyone, whether they want him to or not. More accurately, he talks at them. He espouses a number of philosophical ideas and theories, many of them conflicting with the ones that came before and the ones to come after. His speeches range from eloquent pontification to insane ramblings and sometimes just pointless, stupid statements. Johnny chooses to weaponise his intelligence. He beats people to a pulp with language.

One of the more interesting comparisons made in regards to Johnny came from Michael Coveney: that he is “Hamlet in an inky black jacket”. There couldn’t be, simultaneously, a more accurate and more inaccurate comparison to be made. The similarity between them is that both engage in extensive monologues within their respective worlds. The difference, however, is that Hamlet’s soliloquies illustrate that he lives very much at the centre of his own world; whereas Johnny’s verbal barrages seem more like an attempt to drown out whatever voice is telling him that he is of no importance in his universe.

Johnny, much like NAKED as a whole, is a mass of contradictions. He expresses at almost every opportunity that he understands and, more importantly, is unconcerned with just how insignificant he is in the far grander portrait that is the universe – there’s another famous Shakespeare reference that could go here. He also goes to great lengths to let everyone else know just how utterly unimportant they are as well: posing as someone who is bestowing truths which will free them from their existential shackles, whilst privately indulging his psychological sadism.

But there are flashes throughout NAKED where – thanks to brief moments of silence – a shadow of doubt is cast across Johnny’s certainty and confidence in his nothingness. Most importantly, his comfort with being nothing is called into question. Between each encounter in his unconventional odyssey, Johnny is often shown standing in doorways. He’s silent, a rarity, and thanks to Thewlis’ wonderfully subtle little tics and confused frowns it becomes apparent that, without somebody to berate and belittle, Johnny can’t stand his own inner workings. He talks specifically so that he doesn’t have to listen to himself, because when he’s really left to think about himself and his place in the universe he knows that he can’t stand the former and has no idea about the latter.

There are a few people throughout the film who seem to rattle Johnny in the same way that he manages to rattle himself and, again, it’s perhaps only for a blink-and-you’ll-miss-it second. The first is Brian, an admittedly rather sad security guard whose job Johnny openly laments as being “the most tedious in Britain”. Brian could be considered just another one of Johnny’s many human punching bags, but there’s one important difference between him and virtually every other person Johnny throws mental punches at: Johnny returns to Brian.

In a film that is often baffling, this reunion is particularly confusing – and Johnny’s motivation is never explained, beyond a surface-level scam to get breakfast. This seems completely out of character when we take into consideration just who Johnny is as a person: a nomad defined by overwhelming misanthropy. Johnny hates everyone, and he certainly seems to hate Brian, or at least find him wretchedly pitiable. So why would he voluntarily go back to speak to someone he found so terminally boring in their first encounter? The answer – or one of many possible answers – is relatively simple: envy.

As far as Johnny goes to let Brian know that he despises him, and to make Brian hate himself (okay, hate himself more), Brian is actually the closest Johnny finds to someone who’s not only willing to tolerate his inane apocalyptic chatter, but actually engage in discourse with him. Nevertheless, Brian is hardly a worthy sparring partner. Early in their conversation, when it becomes apparent that Brian’s occupation leaves him with an awful lot of free time, Johnny asks what Brian does to stave off boredom. Brian replies “I read, and I think”. This statement acts as a sort of catalyst for Johnny’s onslaught of conspiracy theories, and triggers a barrage of personal insults designed to break something inside Brian.
Later, over breakfast, Brian decides to share with Johnny his eventual plan. He shows him a photograph of a (dilapidated) cottage and small plot of land somewhere in Ireland. Brian’s plan is simple, but happy. When Johnny inevitably begins mocking him, Brian replies with the simple words: “Don’t waste your life.” He repeats the line a number of times: part retort, part warning. And again, Johnny’s face is etched with that confusion and concern and, in a way, terror.

Johnny reads, and he certainly thinks, but he doesn’t enjoy the latter. The moment he lets himself think, his mind automatically gravitates towards what he so frequently insists that he doesn’t care about: that he doesn’t matter. This is particularly common in men who feel emasculated by a lack of purpose. Johnny’s verbal assaults are no different to a meathead flexing his muscles in order to feel like a man. Johnny has no physical strength to put on display, so he flexes what muscles he does have.

NAKED has faced numerous accusations against since its release with regards to the role that women play. NAKED is very much a film about sexism, sexual violence and misogyny. It is not, however, a sexist or misogynistic film. It attacks the type of toxic masculinity that today is finally being openly addressed. There is no such thing as a good male character in this film. Even Brian, who up until this point came off simply as pitiable, refers to all women as “whores and harlots”. But, once again, there’s no one worse than Johnny. For all the people that Johnny berates, belittles and attacks, he seems to particularly relish tearing down women. NAKED lets you know straight off the bat that you should dread any screen time shared by Johnny and a woman: the film starts with a precisely unambiguous rape. It’s a horrific way to start off a piece of entertainment, but it does set the tone. As a result, tension rises whenever Johnny utters a single word to any female character.

The only person this rule doesn’t apply to, and who is arguably Johnny’s match, is his old friend – if you can really apply that term to someone you’d treat in such a way – Louise. Louise reacts to Johnny’s grand speeches not with the same sadness or even the same kind of boredom as anyone else in the film. She reacts the way someone does when they’ve already had their fill of someone many years ago, someone who’s heard it all before and knows they just have to space out for a moment until they shut up.

“How’s work? Is it everything you hoped it would be? What did you hope it would be?” Johnny asks of Louise. In a film full of little sentences that hold a surprising amount of weight and profundity, this might be the one that sticks with me the most, more so because of Louise’s reaction than the line itself. Louise reacts to Johnny’s inquiry with not just sadness, but a specific, perpetual brand of despair that’s been present for years.

Louise’s next move – and it’s very clear that each little chat is like mental chess between the two – is to question Johnny’s motivation with a seemingly innocuous question. She asks if he was bored in Manchester, which prompts him to launch into a tirade about people’s inability to pay attention to the world around them. It’s a great speech and Johnny actually makes a good point, but it’s an incredibly weird response to a close friend asking if you were bored.

But Louise knew this would be his reaction, because she knows him. She knows who he truly is and how to get to him, much in the same way Johnny knows how to get to pretty much everyone he encounters throughout his life. This reaction prompts the same sort of confusion and anger that Brian’s warning causes, just in a far more venomous and explosive way. Johnny is like a cornered animal, refusing to admit that he is bored with having no idea of what purpose he serves in the universe, despite apparently knowing everything there is to know.

This is reflected during one of NAKED’s saddest scenes, wherein Johnny is thrown out of a cafe worker’s home. Before agreeing to leave, he screams that “No matter how many books you read, there are some things you will never ever ever ever ever … understand!” It would be easy to interpret this as Johnny meaning that no book will teach you how to understand women – that attitude somewhat fits with his character – but with everything else taken into consideration, it becomes apparent that, despite his endless consumption of information, Johnny still cannot understand or relate to human beings in general.

I said earlier that I don’t believe in timeless art, and that holds true. NAKED isn’t timeless, but it will make a lot of sense if you watch it right now. It’s one of those rare films that has the effect of always feeling as though you’re watching it for the first time (and I genuinely can’t tell you how many times I’ve watched it). It’s a perfect coincidence that such a significant anniversary – 25 years – has come around during a time when NAKED feels at its most relevant since release. Things have never been more chaotic, the public have never felt more uneasy about their future, and my generation have never felt more uncertain of their place in the universe. If it were to be released today, NAKED would be hailed as one of the first truly great post-Brexit films. It is quite possibly the most important film to come out of this country since its release.