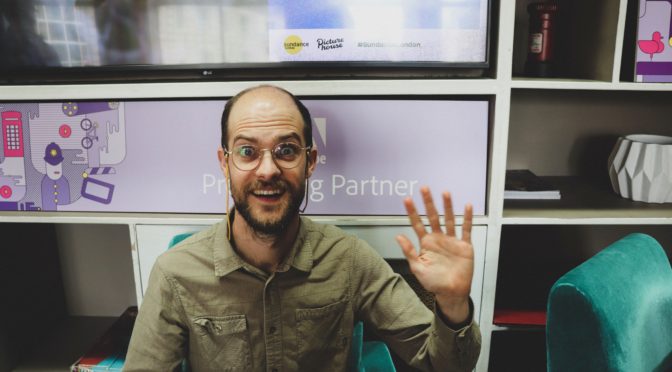 TAKE ONE’s Elle Haywood meets with Daniel Scheinert, the director of THE DEATH OF DICK LONG, which had its European premiere at the 2019 London Sundance Film Festival.

ELLE: So firstly, congratulations on being selected for London Sundance and I have to say it’s definitely one of the most memorable pieces from the festival so far. I haven’t seen such a shocked double-take from an audience that vividly in a long time.

DANIEL: Ah that’s great to hear, it’s brilliant to get a good, provoked reaction from the audience like that. * Chuckling * It didn’t make people walk out or cancel their interviews so I’m happy with that!

ELLE: So how does it feel to have made it from Utah into the final selection for London?

DANIEL: I’m very excited to be back, I used to work here a lot a few years ago! There’s a part of me that, like as a kid I used to watch British films and struggle to understand the accent at times, but also wonder how much was going over my head! I would watch SNATCH and be like, it was the first time I had heard the word ‘pikey’ [sic] and I didn’t have any sort of understanding of the joke yet I still loved the film. I feel like I must be doing that to British audiences with this film, I wonder if people understand what they’re saying – do they get the jokes or do they notice if this is accurate or not?!

ELLE: The film certainly is quite unique, where did the idea stem from?

DANIEL: It was scripted by one of my best friends, Billy, and I think he wanted something that was a challenge. He came up with the idea in college, just seeing what was the craziest movie he could write and to discover his voice as a writer. Getting to write something insane inspired him really, and rooting out the humanity in it; a lot of his writing is similar in that respect. His joke is that you write what you know, take from that what you will …

ELLE: So why did you want to get on board with this project in particular?

DANIEL: I’d been reading drafts of it for eight or nine years, and I’ve just always loved it – I’m Billy’s biggest fan and I’ve always been his unpaid manager for years! Just wanting to get his movies made. So one day a few years ago we just decided that maybe I’ll just direct it.

ELLE: How important was the casting for you then, and getting people into the right roles?

DANIEL: It’s one of my favourite parts of filmmaking is assembling the team, including the cast and crew. So with this one, I wanted it to be one of those indie films where you felt like you’d gone somewhere you’d never been before. One of my pet peeves is people making movies about the south (United States) with celebrities who weren’t from the south who just wanted to try on the accent, I wanted this to be more like MOONLIGHT or BEASTS OF THE SOUTHERN WILD, like those Sundance films where you feel like you went somewhere as opposed to one of those movies that’s like ‘yeah cool, Ryan Gosling did a southern accent’. I feel like it’s a give and take of trying to get people to come, which is nice to have a celebrity in there, but I feel like it actually distracts me instead if I recognise that celebrity.

We cast a wide net, everyone we hired was from the south – some do skirt the edges, Andre who plays Earl grew up in Cincinnati, and his character is built upon some kind of Appalachian bro out of Kentucky, that he is obsessed with. Everyone had a family with accents, nobody had to “train” which was great. Sometimes I’ll watch a movie set in the south and everybody has the same accent, which I why I feel like I wanted a super diverse collection of southerners – being from Alabama does not make every sound like they’re from GONE WITH THE WIND. We’re essentially a wide variety of weirdos.

“One of my pet peeves is people making movies about the south with celebrities who weren’t from the south who just wanted to try on the accent, I wanted this to be more like MOONLIGHT or BEASTS OF THE SOUTHERN WILD, like those Sundance films where you feel like you went somewhere”

ELLE: In terms of filming a comedy with an occasional serious heart, does hitting this balance actually become more pressurising? How do you balance that level of joyful and serious?

DANIEL: In terms of the mood of the set, Dan and I both try to make our movies like summer camp, and make it a positive experience for everybody instead of like our little dictatorship. Once we are shooting, it does get serious and we don’t treat the jokes like jokes. We mostly talk to the actors about the stakes of the scene and hope that the comedy is in there. It was an emotional rot-set at times, keeping secrets and the toll it takes on you and your family which can tear things apart. Even within the jokier scenes, we had to talk with the actors about their lives falling apart. Sometimes I had to tell Andre, who is a hilarious comedian and filmmaker, in his own right to tone it down because he was being so funny. I don’t want it to feel like a comedian is playing the part.

ELLE: Keeping this spoiler free, when the big reveal happens in the middle of the film, how hard was it to keep the pacing up afterwards? It’s so perfectly unexpected and completely scrambles any preconceptions you have about what will happen next.

DANIEL: It’s quite an intense whiplash right? But it was quite mixed in terms of pacing, as I mostly liked how Billy wrote it. It was one of our biggest fears in the edit, working out how to navigate the two halves of the film – making sure the first half is weighty enough and that the second half doesn’t deflate.

ELLE: It almost conveys as a play in two acts, but you don’t get the luxury of a break and charges your energy into the second half.

DANIEL: Once we started showing it to audiences, and showed it to people – we realise that keeping the secret isn’t why people are watching. I think it’s one of the things that I’m proud of with the film is that it’s doesn’t come across as: ‘haha we withheld some information, what a clever film’ but instead we got to go into the repercussions of what in a different movie would have been the climax, we got to make that a midpoint to focus on – what next? I find that I watch a lot of movies and I wish I knew what happened next.

ELLE: A lot of films that are based in the states, especially within the south, can get very political – but the film circumnavigates this quite well and sticks to the story. Was this ever a factor?

DANIEL: It is important, which is funny because we are such political people, more so in the way that we made it. We were very conscious about where we were making it and how we wanted to make it, so we had an environmentally friendly set – and it was a progressive cast and crew. We all signed petitions, and within the edit – a lot of people were involved in the Senate election that came up during the shoot. Judge Roy Moore almost won, who is a sexual deviant, and the movie is sort of about sexual deviancy – I kinda wanted to dedicate the film to judge Roy – he was definitely an inspiration.

I think it’s one of the things that I’m proud of with the film is that it’s doesn’t come across as: ‘haha we withheld some information, what a clever film’ but instead we got to go into the repercussions of what in a different movie would have been the climax, we got to make that a midpoint to focus on – what next?

People look at Alabama in those terms, we didn’t want to make it about that necessarily. There is a political undercurrent which we do Trojan horse into the world, where we explore the fact that these days the type of dark underbelly of men is getting exposed around the globe. This movie is sort of a slow-motion train wreck drama about guys and the secrets they’ve been keeping. I read the news and feel like it’s relevant.

ELLE: What project is next on the cards for you?

DANIEL: Hopefully quite a lot, but other than that Daniel and I have been writing a movie for two years that we’re hoping to shoot this winter: our follow up to Swiss Army Man will be that! Then Billy and I developing a TV show about southern weird stories like this so there’s more that we want to tell, and get more into the politics. We’ve got all sorts of weird ones!

One thought on “Interview with Daniel Scheinert”