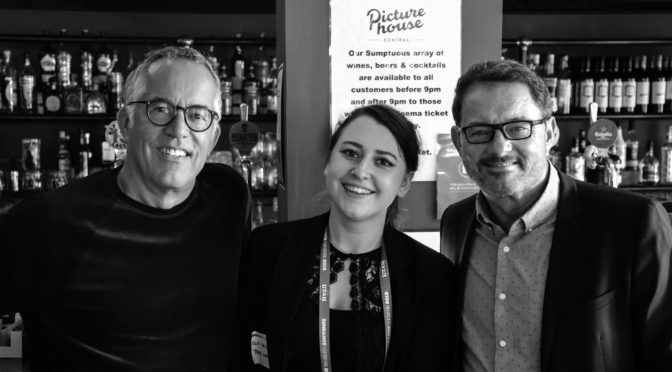 TAKE ONE meets with the Director of Sundance (John Cooper) and the Senior Programmer (David Courier), as part of the roundtable interviews for Sundance London. Elle Haywood discusses the core of both London and Utah, a discussion of the film selections for this year, the challenges the industry is now facing and Sundance looking to the future.

Q: We’ve been following Sundance Collab quite closely, can you tell us more about it?

John: It started off as an idea to take what we do really well and work out how to expand it using technology. It’s pretty amazing but also hard, hard to figure out the tone. You’re not doing it in person, so how can that transfer with video and all the new platforms for connecting people. I’ve been travelling and met with some of the collab people who are fanatics about it, they love it. It can only go so many places. It would be irresponsible not to find ways to reach storytellers that don’t have the benefits that most of us have, including the travel.

David: It’s a lot about breaking down elitism. Our labs are so coveted to get into them is hard, and they have to select by nature of logistics a small group of people to be able to come. For this idea just sent that out exponentially, so much brilliance is happening. We have to get this out there was the reasoning behind it and that collab was our solution to bring it to larger audiences.

Q: When you select people for doing workshops online for this, are you going to decentralise this; would you invite someone from England for example?

John: To be mentors? Absolutely. That’s the plan. Especially as we start to branch into other languages, and what language do you use after English. Do you go to Arabic or Spanish or French?

Q: Sundance has been going on for many years, since ‘78 in the States and you opened in London in 2011 [sic]. How do you pick the films that go from Utah to London, how do you narrow down the choice?

John: A lot of it is instinct. Sometimes you make mistakes. We kinda think that we want to show the diversity of the work that we do first of all. We wouldn’t show all of one kind of movie, we make sure we have documentaries or maybe a midnight film to show the spectrum of what we do. We also work closely with the Picturehouse because they know this market very well, they run theatres all over. We just meet with them, we’re very close with them and they’ve become part of our family.

David: We create a list for them to see to make sure they see these films while you’re in Sundance Utah, and it crosses every section of the festival. But they are ones that we have an idea might play well in the UK. They watch them and say yeah, ‘we do think these would or no we don’t think these would play as well because for instance that actor who is a big star in the US is not necessarily as big in the UK – that’s the reason that people are coming to see a particular movie. And vice versa – So and so may not be known in the US but she’s a big star in the UK – that kind of thing. It’s a collaboration!

Q: Risk Independence is this year’s theme. Do you think that taking risk is a part of what you have to do and even for the risk of the backlash?

John: I think so, I think it’s part of it. And I think with Risk Independence, it’s not a question but more of a demand. We want our audiences to risk coming to see these movies, risk taking a chance on independent films. When they do it pays off. We don’t invent it, […] we just have to get people there then the work is done for us. If the movies are good then it does the work for us.

David: Risk challenging yourself to see a type of film that you assume in advance you might not like. You can find out that instead “wow I do” – why didn’t I ever look at that genre of filmmaking before, I’m really into it. It’s about broadening your horizons as a film lover and viewer – that’s it for us.

Q: In terms of other film festivals and the wider industry, are there collaborative discussions between you all about the challenges that the film industry is facing, keeping it relevant and contemporary, and how to integrate the world of on demand into this?

John: I think we are a good compliment to the on-demand. There was a moment where everyone was like, yeah I’m done with Cinema – just happy to just stay at home. Then you’re bored at home. What is growing a lot is live music over the last 10 years. Events that you are drawn together to experience stuff. Even if you don’t see all the movies here, you will go and catch up.

Q: Is it your responsibility as a festival to be that overly political, is it part of you mission?

David: Our mission is to support good storytellers, and for example – Hail Satan is good storytelling. It is juicy, it is all get-out, it is sly. Naked bodies writhing on alters, and people storming US capitals protesting. It’s all of that. It also becomes a film about the separation of church and state. The tenants of our constitution that we hold dear can’t take them for granted because they’re being attacked constantly. Monuments of the 10 commandments are being erected on state lawns all over our country. They want to images of the devil up there too just to show them that when they find that horrifying, saying well I find what you’re doing as horrifying, because you’re imposing your beliefs on me, so you can’t do that.

Q: Can you talk more about future plans? Including the mini festival in Hong Kong?

John: We are looking at other cities. We are looking at doing something in the Middle East, and some place in South America – maybe Mexico City. Especially with our relationship with Mexico, and now all the stuff about the wall.

David: We want to break down that wall!

John: You have to go someplace where there is energy already, you can’t start from scratch. We have a lot of relationships in Colombia and Brazil. Places where there are pockets of filmmaking. We’re looking for them all. The most important thing is you have to find the right partner. They need to be likeminded, venues, and organisation skills. It has to have that connection.

Q: How do you find the condensing of Utah down into the London programming, because it’s so selective – is the progress and festival more or less stressful?

John: We have to play the game that we don’t want to hurt the films with their actual distraction. A lot of them aren’t ready yet for this kind of attention. It’s a game of PR. We also want to show the diverse range of what we do, we wanted to represent who we are. Heredity played here last year and was a huge success and Strangler, for example, didn’t think it would work but it worked better here than America.

Q: Is it nice getting to “re-do” the festival again after January?

John: Its nice because we get to hang out with the directors in a whole different way. We get to relax! Sundance is a very busy and hectic time. We have 120 features, and lots of them are first or second time directors. It’s not like just bringing in Woody Allen, and putting him in a hotel and dragging him to the theatre. These people are so energised and have a lot of energy.

David: We’re all up on stage introducing movies and moderating Q&A’s non-stop. We go a week without seeing each other because we’re in opposite theatres. It’s crazy! We even get to do our budgets while we’re here, ha-ha!

Q: As part of the selection, you chose to show THE NIGHTINGALE, whose distribution is Hulu – so do you have any discrimination against platforms and streaming?

John: Not, I don’t believe in it yet. It’s a good film, and you know it’s good because we still get to provide a theatrical platform. I think we are providing a service. [Sometimes it’s a film’s only chance to then be shown on a big screen] is at festivals.

Q: What do you think about the controversy at Cannes about the statement of Netflix films not getting awards, and what if films don’t get the chance at all to get theatrical release?

John: I think it’s relevant to the world because I still believe it’s hard to get independent films out. Anything you can do to get people to see them builds audiences. You have to build an excitement around people seeing different kinds of work. Like when we were young and you see your first weird film and go ‘oh my god that’s different from all those Disney films you grow up with’ – your first real movie that is edgy and excites you. You have to train audiences to be accepting of this. The French audiences are amazing, but because of Cannes, y’know?

David: We have not come down against steaming devices. We know that they serve filmmakers; that’s a big part of our mission. How it works out whether a film plus in a movie theatre or online is up to them after they’ve been part of the festival, it’s what they choose. Anything that is produced by a streaming platform, we’ll still show them but take all factors into consideration. We’ll put it into the right category.

Q: Is that ever a problem, if a film doesn’t get theatrical release, to then be put into competition when it won’t be seen by the vast majority?

John: At Sundance don’t know if any of the films will have a theatrical release. They’re all coming in trying to find that, we don’t know what will happen next. The bigger question is how many of the amazing films would have been made in the past couple of years without these platforms. I ask all those filmmakers, did they get in your way? Did they tell you what to do? Did they try to cage or commercialise you? None of that. They were all given the budget. They then got to do what they wanted and got to build their careers. You don’t want people with original ideas not to get a chance to show them.