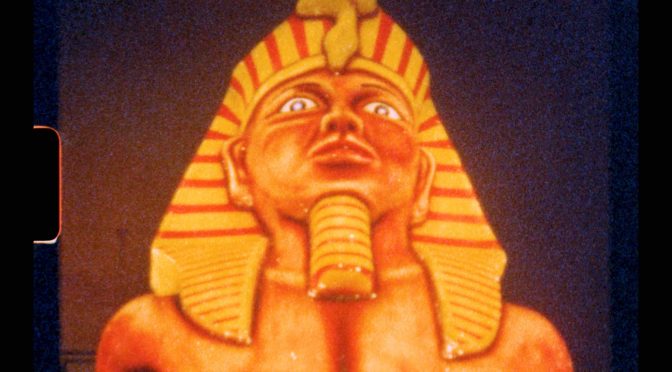 In ISHA, we get to meet Rahmi, who lives and works in London at a small café. He has a Romanian Muslim heritage, yet we do not meet this version of him just yet. Instead, we are greeted with his naked sun-kissed silhouette in the early morning light, peering out to the city lights under the watchful gaze of his lover. Shortly after we hear the call to prayer,  we understand the secrecy of his partner and homosexuality, and the conflicts this may bring into his religion and culture under the scrutiny of his family.

There is an underlying tension between him and his brother; while his mother dotes on him, and leans on him for support due to the absence of their father. It is apparent where the simple complexities are for Rahmi, caught between the welfare of his family and his own self-preservation. What is most touching is the raw, honest sensuality of the piece, where their love is not sectioned out because of their sexuality, but is instead celebrated graphically and captured in the heat of the moment; it feels genuine and uncensored. Their post coital embrace in the light could be romantically clichéd but in reality embodies the atmosphere of young love and hope. Everything that matters revolves around them in their room, regardless of the consequences and judgment. Contextually there is an array of difficulties and burdens, but it its heart this is a true short intimate love story.

Perhaps one of the most intense and prolific murder cases of modern times is the death of Damilola Walker back in 2000, when the loss of his life caused a rippling effect across the city; and notably for Cornelius Walker. In this docu-drama, narrated by the man himself, Walker tells us of how his family moved from the city, which he describes as ‘My Multicultural London’, out to Essex, due to the rise in racist-related crimes; and of the tragedy that unexpectedly ensued.

Shot as a beautifully lit portrait, a captivating intensity shows in his eyes as he eloquently recalls his story. From facing off kids who Nazi salute, being abused and having racial slurs thrown at him, to attempting to bleach his skin and befriend the racists for the sake of survival; the film truly takes you on a journey across his life. The utter disbelief at why he even became close to these individuals, and coming to understand that circumstantially, to have any life at all, he needed to make a huge sacrifice. In addition to the cruelty, Cornelius must also deal with the expectations of his father, in a heartbreaking moment when he crumbles on screen about wanting to be the ‘lion’ his father was. But the darker side was that of his father’s frustration and anger directed at his family, which undoubtedly caused a chain reaction and added to the pain. One of the most direct, stern and clear narrations I had heard in a long time, BLACK SHEEP is a critical reminder of how far we still have to go as a society, especially in terms of ingrained rural racism, and what one must endure to survive.

Echos of a familiar song, car stereo booming and their voices carrying on the wind like sunlight, MERCURY is a story of Al, a young pregnant girl and her best mate Bambi, as they head to the hospital for her to give birth. Decked out in her indie punk clothes and jewellery, mirrored by Bambi’s more twee attire, Al must start to come to terms with her impending labor and what the future holds for her.

We know nothing of the circumstances, besides a brief run in with some of the potential fathers on a council block nearby. The girls chat merrily in the car, showing the warmth of friendship. But Al’s jitters are becoming harder to hide, as the camera focuses on tiny macro-actions that betray her fear all too clearly: taking a brief swig from a whiskey bottle, she shifts in her seat at the discussion of the adoption, and protectively holds her stomach. For it would be deemed unfair to judge another’s circumstance, and her brief adoring commentary about why she wanted to leave her daughter with a name helps to understand her strength. The brisk striding from the car is heated with emotion as her face gives away nothing, but her eyes speak volumes. Arguably there is even a foreshadowing of a future story: you know what will happen, but it feels nostalgic. In a state of shaken, heightened emotions, the perplexity of the piece is understood, as visually we are placed in the back seat of the film to watch on. We travel in the car with them, but cannot cast forth our opinions as we must allow others to do what they feel is necessary to push forward.

Nights in the city that never sleeps are packed and repetitive, the NYC subway rattling along and the cars making their way through the night. In SALAM, a young woman returns to see her family and rescue them from a mouse, before heading off on her night shift as a cabbie. However, amidst all this, she tentatively waits with phone in hand, for news from Syria about her husband and family. One of her jobs includes picking up this woman who is really quite shaken and keen to get away from her situation. They go for coffee and discuss the parallels in their lives, breaking down stereotypical perceptions of an independent Muslim woman in the US and an Upper East Side girl from a complex family situation.

The lights shimmer down the car, and there is a sense of a collective sigh of relief when they reach a clearing, surrounded by fields, swaying trees and finally an inhalation of air. In a small pocket of escapism from the constant onslaught of bombings in the Middle East, caught up in some sort of emotional and financial instability from a partner and estranged parents; they find comfort in each other’s determination, and the strength to keep going. Moving in ways one would not immediately expect, thoughtful and open – Fowler’s short blends contemporary realism and unity in the face of each character’s personal adversity.

There is something deeply moving and personal about putting on your make up first thing in the morning. Lining your lips, lacing your eyelashes in black charcoal and choosing the perfect set of earrings to fit with your outfit. This is the opening scene of WAITING. In intrinsically beautiful detail, we are shown Frederica’s morning routine. Her tenderness at setting up for the morning, as she has always done, is captivating. However, her pause outside the bus stop on her walk begins to drag on longer than feels normal, and as dawn turns to dusk, she is expressionless. She waits patiently, her eyes searching, until she is met at night by a nurse who guides her home.

Something sits in the pit of your stomach watching, hoping that her initial feelings of fulfillment will guide her through the day, but her memory seems to have been affected by a type of dementia. A cruel illness in itself, but to have had a content and fulfilled life before makes it even more bittersweet. The silent noise in the film speaks for itself, an echoing sadness. Hett captures the threadbare loneliness of old age, but also offers a faint lit warmth, emitted from the nurse who tends to her in the evening, assuring her she is cared for. While this may not be an everyday reality, it sends a gentle message about displaying kindness to all, no matter what the circumstance.

NORTHERN LIGHTS is a brash, bold and thoroughly intrusive film that is hinged upon philosophical ideologies about our world and the messages we live our lives by. Given the premise of an alien life form attempting to understand our world (with the imagery and pretext mirroring something out of THE MATRIX or 2001, A SPACE ODYSSEY) we are given a running narration in the style of prose poetry, tying in all the famous quotes, phrases, slogans and common sayings in an elaborate yet calm monologue. The garish, scratched film of an active yet aged fairground flashes continuously as we are reminded of the rat race of a planet we live on.

The inept and blazing attitude of our crumbling political system, the complex cultural narratives that reflect the capitalist hierarchy by which our societies are dictated and the extensively manipulative propaganda we so unquestionably consume. The distorted, hazy lights of the abandoned rides mimic the cyclic patterns of day to day mundanity, and like moths to a flame we are drawn to its promising light, without the notion that we could be burnt in the process.

It illuminates our past metaphorically and visually, mocking our attempts to seek redemption, find comfort in religious prose and the idolization of celebrities so that we have some sort of divine gaze to look up to and feel safe. Psychologically distorted, and telling of harsh truths formed of the sayings we compose, it makes one think about our projection to the outside world: the stories we tell to feel safe, and the myths and legends we create to explore the possibility that we may not be alone in this world. But also if we are truly alone, after having seen this, this is by far the more terrifying prospect.