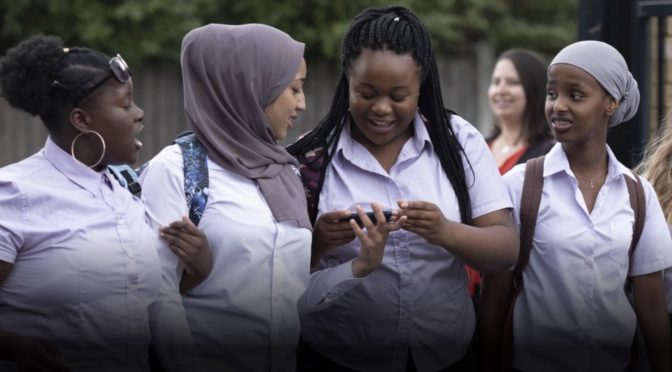 When Shola ‘Rocks’ (Bukky Bakray) arrives home to find her mother gone, it falls to her to care for her younger brother Emmanuel (D’angelo Osei Kissiedu). Luckily, in her corner she has a close group of school-friends, especially her best friend, Sumaya (Kosar Ali). However, accepting their help and admitting the desperate nature of her situation may prove too difficult for Rocks to bear.

Writer Theresa Ikoko, at the Q&A before the screening of ROCKS at the Cambridge Film Festival, described, despite the serious subjects and hardships presented in the film, how “full of joy” it is. This is a film about friendship, and it’s difficult to name many other stories that nail so convincingly the hot-tempered, fiercely loyal, often hilarious (and just as often bafflingly stupid) world of teenage relationships.

The film crackles with authenticity and life, enabled, according to director Sarah Gavron, by a constantly rolling camera and encouragement for the young stars to improvise. Largely discovered in local schools, and with mostly limited, if any, acting experience, this was crucial in allowing them to feel comfortable and perform in a natural, uninhibited fashion. Anyone who has witnessed, or been a part of, the chaotic, cruel, yet creative and amusing discourse of a group of teenage girls will attest to how successful ROCKS is in this regard.

Of course, none of the above would have been possible without the young performers themselves, all of whom deserve so much credit. Each of the group of friends feels so lifelike and real and their interactions with one another so convincing that most reality shows and documentaries covering actual friends and families would struggle to match the chemistry and authenticity on display here. It feels unfair to single out performances in such a strong ensemble piece, but special note must go to Kosar Ali for the strength of her performance as best-friend Sumaya, Shaneigha-Monik Greyson as fiery new-girl Roshé, and D’angelo Osei Kissiedu, Rocks’ younger brother and probably the youngest member of the cast, who manages to steal many of the scenes he is in with his charm and naïveté.

Bukky Bakray’s lead role is where most of the praise will – and should – land. For such a young age, this is a tour de force of a performance, carrying the film on her shoulders – appearing in practically every scene. For most of the runtime she is closed-off, holding everything in with remarkable subtlety and restraint, until one moment as the film reaches its climax where she lets it all go in an astonishing display of raw, unrestrained emotion.

Perhaps the most important aspect of ROCKS is in its positive portrayal of the multicultural area in which it is based. For all its strengths, a show like Top Boy, depicting the same location (Hackney), largely represents the negative aspects of the area: gangs, drugs, violence. This is not to suggest stories like Top Boy’s are not important, but it is refreshing to view a film like ROCKS that shies away from that, and instead focuses on the strength, camaraderie and vibrancy of the different communities within. In Rocks, Sumaya, and their group of friends, all from different backgrounds, ROCKS presents a microcosm of the benefits of such a melting pot of cultures and gives us hope for the future.