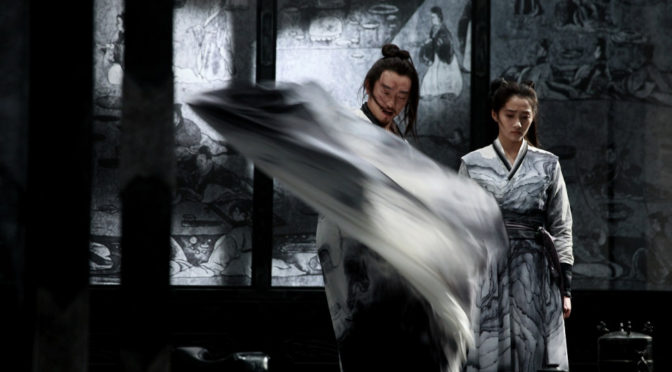 The wuxia pian, the Chinese martial arts film, seems just as vital today as it did in the days of King Hu. In recent years auteurs from China, Hong Kong, and Taiwan have made use of the genre while melding it with their own stylistic interests, whether that be the haptic details of Wong Kar-wai’s THE GRANDMASTER or the rhythmic splendour of Hou Hsiao-hsien’s THE ASSASSIN. Jia Zhangke’s next film will see the director join the wuxia ranks. But before that wuxia monuments like Ang Lee’s CROUCHING TIGER, HIDDEN DRAGON, and Zhang Yimou’s HERO played in cinemas. And Zhang’s back for more: SHADOW, his unfairly VOD-relegated recent film, shares a good deal in common with HERO, if not quite assuming a role as its equal.

Set in the (erroneously named) era of the Three Kingdoms (220-280 AD), SHADOW concerns the court of king Pei (Zheng Kai), an odious ruler who commands obsequious allegiance from his subjects, many of whom look ready to sink their daggers into his chest. Pei lost the city of Jing to a rival king, Yang (Hu Jung), when his commander Ziyu (superstar actor Cheng Dao) discovered Yang is unassailable in a duel. Ziyu has just rechallenged the victor without the express endorsement of Pei and so the king strips Ziyu of his sobriquet, all the while suing for peace, offering his sister Qingping (Guan Xiaotong) as a bride; an offer met with a mortifying counter-offer: Yang’s son requests her as his concubine.

Another problem for Pei: Ziyu is not who he says he is. The real Ziyu (also played by Cheng Dao) is hiding in a cave adjacent to the court. The man in his stead is himself named Jingzhou, and he was recruited by Ziyu because of their extreme likeness to each other, and made to swear that he would become the commander’s ‘shadow’ should the need ever present itself. The only other person cognisant of this fact, and the treachery-chain it forms, is Ziyu’s wife Xiao Ai (Sun Li).

This is a profoundly convoluted film, its first forty minutes swelling with perplexing details. But this fact doesn’t register itself until after the film is finished: a fair amount of SHADOW is splendid because Zhang, as he did in HERO, depicts the world of the film as inseparable from its use, or in this case almost non-use, of colour. The film is shot “in colour” though the sets, costumes, objects, and even the air itself of this world are captured in a thousand variations of grey and black. The only things which glow their natural light are flesh and its scarlet fuel: and there will be much blood, there’s no mistaking.

In order to defeat Yang and reclaim the city of his name, Jingzhou practices duelling with Ziyu, debilitatingly injured in the first encounter. Yang is undefeated because of his ferocious style of combat: so the three realise the only way to beat him is to assume the opposite style. Xiao begins to tutor the shadow in how to fight in a feminine style, to sashay rather than stride, using the speciality weapon of a bladed umbrella, to parry the blasts and use the force repelled against its wielder. These training scenes and the final showdown occur on flat surfaces with Tai Chi symbols adorning them: so Jingzhou has to use yin to overcome the literal Yang.

For a film about doubling, opposites, and assuming identity in a world which disowns it, what lets SHADOW down is the manner in which it truncates the roles of Xiao Ai and Qingping. Xiao enters into a stale romance with the shadow of her husband, and Qingping seeks revenge for her humiliation, but the two characters have hardly received the individuation the others have. Zhang has not granted them admission into the heart of the drama.

But such disappointments have to held in pendant with the film’s ability to delight, and one sequence in SHADOW stands in this regard insuperable above the rest. As Jingzhou leads a stealthy infiltration of his name-sake city, confronting Yang on a retractable platform, Pei’s criminals and exiles make their way into the city’s streets. The combatants pick off guards with their bladed brollies and glove-mounted crossbows. Once ready atop Jing’s hill, they pincer themselves between two umbrellas and slip down the steep, rain-lubricated descent to the city’s heart, spinning like beetles caught in a flood. The arrows of the city’s archers deflect off these weirdest of shields, tinkling like cymbals as they do. So odd and enjoyable a sequence is a rare thing, and it’s hard not to think of how a cinema screen would have expressed this oddness to its full extent.