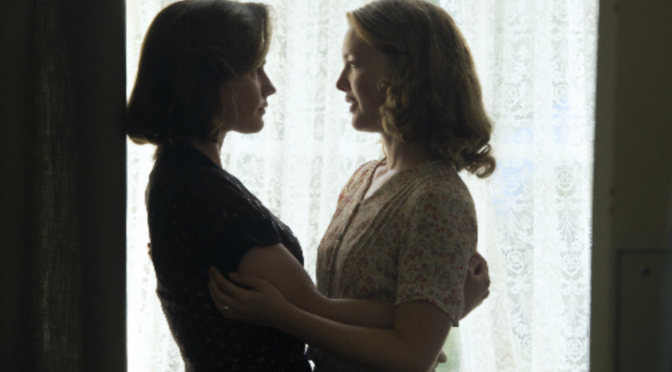 Venturing into a rural town untouched by innovations, Annabel Jankel presents an illicit love story frowned over by prejudice while protected by peculiar swarming bees.

It seems that 2019 is (finally) the year of lesbian films hitting the big screen. From Paul Verhoeven’s intriguing new film BENEDETTA to Chanya Button’s most anticipated VITA AND VIRGINIA, there’s clearly an effort to keep riding the wave ushered in by THE MISEDUCATION OF CAMERON POST last year. Joining this blooming trail of women-who-love-women titles is Annabel Jankel with TELL IT TO THE BEES, adapting Fiona Shaw’s novel. Set in rural Scotland at the end of the 1950s, the story follows Lydia (Holliday Grainger), a young woman left by an unfaithful husband, who tries to keep it together while working in a textile factory. After getting into a fight with some bullies at school, Lydia’s son Charlie (Gregor Selkirk, a star of TAKE ONE Best Short winner THE WIDER SUN, on his exquisite feature debut) meets with the town’s new doctor, Jean Markham (Anna Paquin), and gets interested in her beehives. It’s only a matter of time before the two women meet and although the chemistry between the two is not as enviable as it should be, it’s still pretty much clear that somehow there’s a force drawing them closer.

Poetically opening on Charlie observing the bees while reminiscing of the story about to unfold, the film can’t help but explore Charlie’s relationship with the bees to the point of almost overshadowing the one between the two women (especially in light of the bittersweet and slightly unfulfilling ending). Drawing from a superstition passed on by Jean’s father, who told her daughter that whispering secrets to the bees would prevent them flying away, in the first act there are several scenes dedicated to further this belief while providing a nice, bucolic insert into the narration. What works in the first half, then starts to wears off in the second. Going heavier and heavier on CGI, TELL IT TO THE BEES turns nature into a far-fetched excuse for a kind of deus ex machina resolution where bees are supernaturally responding to their little lord’s commands. Its intention might have been noble, but it sadly looks poor on the silver screen.

Where interactions between Lydia and Jean seem excessively stiff and affected at first, as soon as the restraints are ditched and lips finally caress lips, lifeblood is injected into the film. Although Jankel appears more concerned with pointing out how toxic the narrow-mindedness that dominates the rural village is, the relationship between the two women is both nurtured and explored in various modes of intimacy. Glimpses at blissful moments of domestic life enrich the narration as the lustrous cinematography does justice to many lush Scottish sceneries. Overall, TELL IT TO THE BEES is a good effort, a much needed step along this freshly paved road towards a comprehensive female representation.