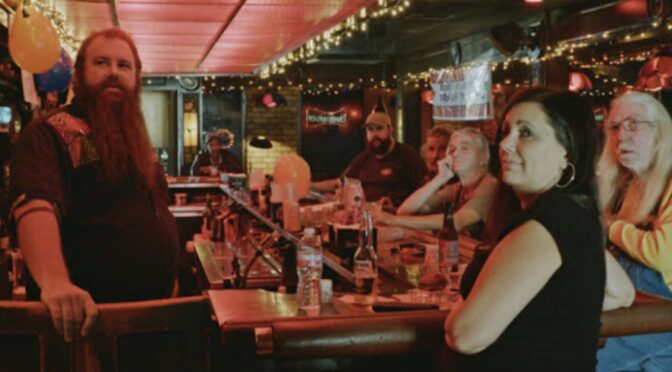 Mere minutes into Bill Ross IV and Turner Ross’s BLOODY NOSE, EMPTY POCKETS, a simple action takes place. A man walks into a bar, purportedly in Las Vegas, and hands a brown paper bag to the burly and bearded bartender. “Do I want to know what’s in here?” he asks, finding a place to stash it. “Nope,” he’s told. It’s the first among the film’s many signals that beneath its documentary textures, its vérité camerawork and calm but quick editing schemes, something planned and constructed is at work.

Like Lionel Rogosin’s ON THE BOWERY, BLOODY NOSE, EMPTY POCKETS is devised, scripted to an extent by both cast and crew; except The Ross brothers’ film takes the trickery to a higher plane: it wasn’t even filmed in Las Vegas. The Roaring 20’s, the bar whose closing night the film takes as its structuring event, is in New Orleans, and those who take up positions in the film are New Orleans bar regulars recruited by the directors.
The melding of fiction and documentary here is not in the service of duping the audience — after all, it’s a rare documentary that doesn’t contain at least an element of staging — but instead to fulfil Emily Dickinson’s instruction to ‘Tell all the truth but tell it slant’. And aside from the moment-to-moment pleasure this can provide, the inseparable mixture of a controlled environment and sauce-induced spontaneity, this method comes across as the best possible way of representing its ostensible setting. A Las Vegas film shot elsewhere, dressed up to look like it with location footage artfully interposed, is a fitting tribute to a city of profound fakery. The sense of this is present in the film’s first chapter heading: “We hold these truths to be self-evident.”

The directors’ play with form allows them to catch the swings of tone and mood inherent in a drunken evening, the inspired levity and the deep sorrow that mingle at the bottom of a glass. Characters/subjects sit exasperated, despondent one minute and turn giddy and playful the next. There are roaringly funny non-sequiturs: the man dressed as a minion from the DESPICABLE ME movies is caught in the midst of a conversation, intoning, “Buttons, the whole fucking thing’s about buttons”; which is almost as good as the declaration of, “Senses: that’s something I appreciate,” delivered by a fellow who’s the spitting image of Albert Einstein; which in turn is almost as good as the big Australian guy, plummeted into a state of stunned silence by an acid tab of a higher than expected dose, whose final salvo before hightailing it into the morning light is too perfect to mention out of context because it is itself contextless.

If that’s the levity, here’s the sorrow. Not forgetting the twilight vibe imbued in the occasion itself, there are heart-to-hearts (a teary veteran, Bruce, giving voice to his anguish; a conversation about mutual loss that inspired a friendship), more minatory moments (a belligerent patron beckons a fight with a chap who has eyeballs tattooed on his eyelids), farewell songs, and a celebration seen for the most part through CCTV, giving it an otherworldly quality, as if it’s already done, finished before it started. But as the sense of dilated and dead time, stretching out the bar’s final hours, becomes more pronounced, one character/subject assumes especial importance.

“But as the sense of dilated and dead time, stretching out the bar’s final hours, becomes more pronounced, one character/subject assumes especial importance.”

BLOODY NOSE, EMPTY POCKETS is, as much as possible, marshalled around the presence of Michael Martin, a professional actor who is first in the bar in the morning and the last to leave nearly a full day later. His is the most obvious and self-conscious performance in the film. Intermittently pouring over his book of Eugene O’Neill plays, Michael spins through a cycle of moods as the afternoon crosses into evening and then fades to morning again. At times he’s full of untrammelled sweetness, reconnecting with dear friends; then he grows sullen, withdrawn, letting out a caustic cynicism; after that he has pockets of inebriated lucidity, exercising his questioning, probing mind in discussions about intergenerational tensions, the climate catastrophe, and what he feels is the hokum rhetoric of “extended families.”

But even when downplaying that notion, he seems beholden to it: his final line displays a hurt that cuts through the affected but necessary posture of guarded disappointment and dejected humour. This humour is abundantly visible and audible in BLOODY NOSE, EMPTY POCKETS: in the badinage at the counter, on the icing of a cake that reads, “This Place Sucked Anyway,” and in the closing song choice. It’s set up as a defence mechanism for the bar’s catalogue of lonely, wounded souls. The Ross brothers play with this register, infuse it in the film’s atmosphere, and then go beyond it; in the process, their camera fairly courses with affection with those who appear in front of it. The directors’ crestfallen generosity animates this particular closing time, transforming a concocted scenario into a space full of what seems like extempore feeling and lived-in experience.