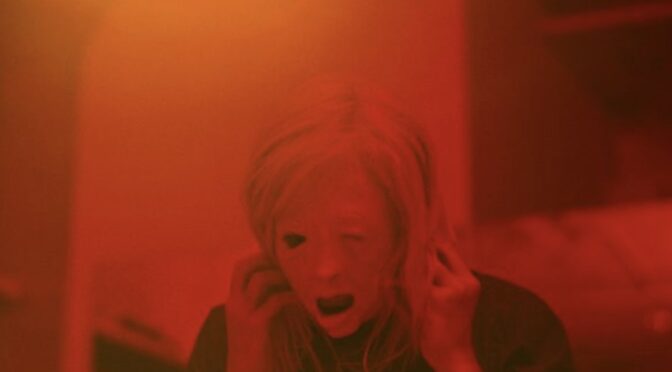 POSSESSOR is the second feature film of Brandon Cronenberg, starring Andrea Riseborough as Tasya Vos, an assassin that possesses other bodies to carry out her work. Cronenberg’s science-fiction horror is as unsettling as it is beautiful.

Tasya’s abilities of possession exist through technology provided by her agency, who task her with killing businessman John Parse (Sean Bean). To do this, she must inhabit the body of Colin Tate (Christopher Abbot), who slowly starts a battle for his consciousness, leading to a disorientingly psychedelic fight for mental dominance.

Cronenberg’s direction boasts claustrophobic cinematography and a rich eerie atmosphere. While the most horrific moments of this film come much later into the runtime, Cronenberg works hard to ensure that every second leading up to this counts, aligning our own descent into horror with Tasya’s own mental decline. As her mind slips deeper, we’re treated to reality-warping sequences of the two minds fighting for control, featuring practical effects impressively reminiscent of the works of Cronenberg’s father.

This mental battle isn’t only shown through special effects, however, with most of this being embodied by the performances of Riseborough and Abbot. While Riseborough physically does not appear as Tasya for much of the film, the moments we do spend with her establish the character of Tasya perfectly, as well as fleshing out the film’s concept and the technology at play. One small but noteworthy scene shows her practising talking to her own family, which both establishes the speech practice needed for body-switching, while also implying a falsehood to her own life.

Abbot is left to carry the second half of the film and provides an equally interesting performance. For most of his screen time he’s playing Tasya in his body, with his stunted speech really selling the idea that it isn’t him. However, when the character of Tate takes control again Abbot’s performance starts to become less engaging. Maybe it’s a lack of development of Tate as a separate entity but by the time we’re spending time with him behind the wheel, his actions as an individual feel jarring. Special mentions should be made as well to Jennifer Jason Leigh’s Girder, played with an almost inhuman comfort with the assassinations they carry out.

Despite an effective atmosphere and strong performances, a large shortcoming of POSSESSOR is its one-sided perspective. While brief mentions are made as to the ambiguity of who is in control, it fails to truly address the result of this ambiguity through the eyes of Colin Tate, as well as the ethics of body-hopping for assassination. While ethics are not a concern for many of the main characters, a mention of this and the effects on the possessed could have given Tate more of a role as a character and not just a vessel for the plot. With how much of the film comes from the internal battle, and how much of the film we spend with his character, the lack of development Tate has as a character compared to Tasya makes the latter parts of the film feel less compelling as a result.

POSSESSOR is a breathtakingly disturbing horror movie boasting great performances from its cast and some fantastic direction.