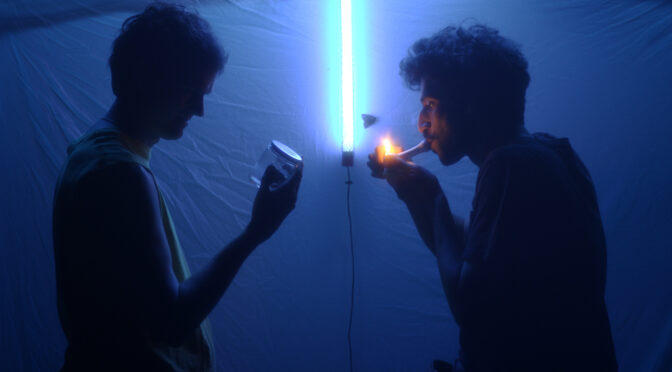 A film that makes you feel stoned whilst being completely sober is no easy feat but Brandon Colvin’s ethereal feature does just that.

Part queer allegory and part folklore with hints of stoner comedy, A DIM VALLEY is hard to define and pin down. It follows a biology professor, Clarence, played wonderfully by Robert Longstreet, and his two graduate students, Ian and Albert (Whitmer Thomas and Zach Weintraub) while they conduct fieldwork in the middle of the Appalachians, an isolated cabin being their refuge for the duration. During a heavy night of smoking and biological research, Ian, in a stoned daze, spots three otherworldly looking backpackers. He is unsure if they’re just a figment of his imagination until they turn up again the following day.

The three backpackers set in motion a series of events. The film evolves and, in turn, so do the characters; the narrative becomes saturated with themes of discovery, realisation and reconnection, with each character finding their own meaning. The backpackers, who the film leads you to believe are forest Dryads or Nymphs, are catalysts for this change and have an almost magical presence.

The striking cinematography is where A DIM VALLEY really excels; cinematographer Cody Duncan has created a mythical landscape dedicated to nature and science, with its wide-open spaces signifying endless possibilities, and that is exactly what it gives us. We’re never really sure where these people will end up.

There’s a deliberate pace throughout, a steadiness that seems to come from an immersion in nature; a subtle nod to benefits of slower living with its ability to ease the process of looking inward. One of the film’s most effective, contemplative and mesmerising scenes occurs when Clarence sings and plays a song from beginning to end, with no sense of hurry. Elements like this add to the film’s thoughtful and insightful narrative. It allows its characters and its audience to procrastinate.

A DIM VALLEY is a perfect festival film and will likely divide audiences with its unhurried momentum. However, there’s no denying its profound effect on our psyche as we start to wonder what was really in that popcorn.