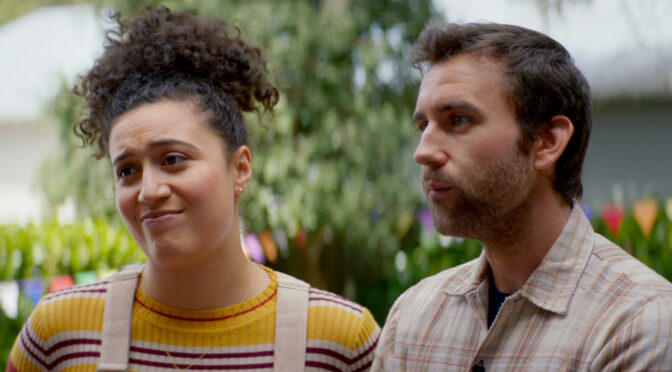 BABY DONE, a New Zealand spin on the pregnancy comedy, confidently portrays the absurdity and crises of identity that come with bringing a child into the world but lacks dramatic heft or incisive wit.

Kiwi stand-up and rising star Rose Matafeo is an engaging presence as Zoe, a twenty-something pining for adventure who feels hampered by the inevitable restrictions of motherhood. Her comedic sensibilities are clearly well-refined – and the character’s inner conflict always feels authentic – but fans of her stand-up are likely to find the comedy lacking in edge.

Zoe is an arborist and runs a small business shearing trees with her partner, Tim (Matthew Lewis). From the opening scene of them on a job, we get a good sense of their dynamic – she is the more reckless adventurer, and he is more likely to follow rules anxiously. Their chemistry makes them likeable even if their characters feel familiar. Director Curtis Vowell captures their offkey dynamic and deep aversion to their peers settling down into family life, and writer Sophie Henderson’s script steadily unpicks how their communication failures and conflicting stances on parenting are threatening their young, carefree lifestyles.

While their characterisation is effective, it still feels a little basic. Our characters’ goals are the first sign of weak plotting: Zoe’s dream is to compete in an international tree-climbing tournament. Coming up with a competition for the protagonist’s specific interest feels one-dimensional; apart from being extremely convenient for them, it doesn’t require our character to change or grow to achieve their goal. Instead, they need to keep doing the one thing we know they like at the same level of quality. There is not much of a dilemma presented between committing to raising a child and enjoying an adventurous lifestyle, or having Zoe second-guess herself with every progression towards one or the other. In its current state, the character work is too simplistic to sustain dramatic investment.

That said, there is effective comedy sprinkled throughout the film. Occasionally, there will be a well-timed, unexpected gag that lands perfectly. Whether it’s a bout of unexpected morning sickness or an inappropriately-timed confetti cannon, Matafeo and Lewis get to show their comedic skills in ways that feel fitting for their characters.

Some additions, however, are less welcome. In what feels like an isolated offhand joke, we’re introduced to a “preggophile” (someone aroused by pregnant women) who Zoe subsequently gets involved with. The awkward, uncomfortable humour rears its head here again, but any charm from its previous use has dissipated. Seeing Zoe feeling discomfort because of this man is not amusing, there’s one throwaway joke implying he’s a predator, and by the time Zoe is in his apartment wearing a cast of her baby bump we’re screaming at her to get as far away from him as possible.

Members of the Kiwi improv troupe Snort (which Matafeo is also a part of) show up in unremarkable cameos that don’t take full advantage of their improvisation skills. A highlight is a welcome appearance from Rachel House (HUNT FOR THE WILDERPEOPLE) as a school principal who spars well with Matafeo with comic dialogue. However, the scene mainly works because Zoe is pretending to be her high-school-aged colleague’s mother, and therefore is giving an exaggerated performance of motherhood, something she’s been fighting for the whole story. There’s a dramatic purpose to the scene that helps Zoe reflect on her journey.

This storytelling focus is lacking in other parts of the film. Realising that their lives will be completely transformed in a post-baby world, Zoe and Tim start compiling a list of things they want to do before the birth. It’s a good device for showing the differences in each of their values and priorities, and conflict soon germinates between them on the back of this. But at a certain point, the list is just forgotten about, and the story’s unfocused progress deprives the film of a solid, clear narrative throughline.

At its heart, BABY DONE is a film about being uncomfortable adopting the roles of parenthood, and realising they’re only as restricting as we allow them to be. The film’s shortcomings aren’t from a lack of ideas, but rather from their execution. There’s a compelling story somewhere in BABY DONE, it just never manifests impressively. Engaging performances, funny moments and promises of absorbing drama feel all the more unsatisfying when we see the undisciplined way the story is told. The audience might enjoy the journey in parts, but they’ll mainly reflect on the lack of meaningful connection they had to the characters and their problems.