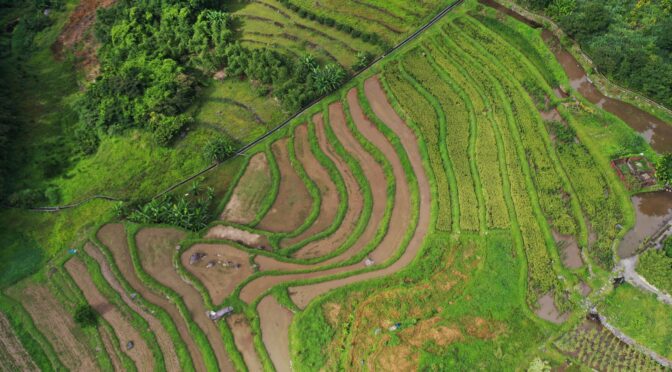 GROWTH WITH HOPE beautifully illustrates why we are all needed in our local community to build sustainable farms and engage food education for future generations. Director Jessica Wan-yu Lin follows the story of successful eco-farming initiatives in northern Taiwan, in the Qingshui Wetland in Jinshan following the island’s WTO accession and the consequential damage to the agricultural sector.

In the centre of attention is Yang Ru-men, known to many as the ‘Rice-bomber’; an ardent, non-violent eco-activist who got imprisoned for planting homemade bombs in Taipei to attract attention to the plight of farmers. Another prominent story that we follow is that of the young leader of the local fishing community, Yang Xin-ji, who humbly admits that he is still learning the ins and outs of fishing from his elderly colleagues.

However, the emphasis is less about their plight and more about enabling growth: we observe Ru-men Yang laying down water pipes with local farms, setting up prawn traps with university researchers, reintroducing firefly larvae and counting fireflies with kids, replanting rice seedlings with school children for their school lunch or building a traditional mud fireplace. Similarly, we follow Yang Xin-ji and his boatmen catching leaping sardines with handheld nets in the light of torches, manually selecting and stacking the silvery fish, and on stormy nights struggling in a small boat tossed by the large waves.

The scenes of sustainable farming and fishing are dotted with an abundance of vibrant, poetic natural scenes, showcasing the beauty of migratory birds – Taiwan barbets, black-faced spoonbills, yellow tits, among others – and the exciting microcosm of animal life in the paddy fields. These highlight organic farming and environmental protection inherent to Satoyama, a Japanese initiative that aims to promote the harmonious coexistence of humans with nature, a belief fuelling Ru-men Yang’s passion for helping the community.

“GROWTH WITH HOPE aims to be an inspirational documentary by focusing on hope rather than threats, and encouragement rather than condemnation.”

GROWTH WITH HOPE aims to be an inspirational documentary by focusing on hope rather than threats, and encouragement rather than condemnation. That said, it offers an indirect criticism of Taiwan’s 2002 entry into the WTO, which resulted in an influx of foreign food products. Throughout the film, there is an apparent lack of government efforts to educate farmers or fishermen about contemporary techniques of eco-farming or sustainable fishing. It is equally shocking and hopeful to realise that it all comes down to a single person, whether an eco-farming proponent or an accidental fishing boat leader, to create ripple effects in a local community to help them survive and save their habitat. Many workers are elderly, unaware of the dangers of pesticides or releasing exotic wildlife that imbalances biodiversity, let alone the more recent developments in eco-friendly agriculture.

While observing the aftermath of a recent oil spill, the film looks beyond the display of the dreadful effects on the marine and human ecosystems. Instead, we witness how the local fishing boat leader is trying to tackle profit loss by experimenting with eco-tourism, offering an opportunity for growth with hope in the face of catastrophes. However, because the government officials largely responsible for the plight of fishermen and farmers are not confronted, the film feels inhibited. It offers highly educational insights through thoughtful perspectives rather than hard facts into the initial, transformative steps needed to inject an eco-friendly mindset into a rural community. The message is not necessarily anti-global and instead points a finger to humans, especially to the neglectful leadership of an unresponsive government, making the film relatable to any farming communities, environmental activists and educators.

“However, because the government officials largely responsible for the plight of fishermen and farmers are not confronted, the film feels inhibited.”

One of the most outstanding moments in the documentary tentatively breaks away from the mostly naturalistic scenes. A glow worm night sequence is tantamount to an experimental short film embedded within the documentary, meditating on light and darkness and pointing at the quiet wonders of nature untouched by human hands. However, nature here is not untouched and is perhaps, instead, ‘re-touched’: Ru-men reintroduced the glow worm larvae with the locals in this segment. That act represents a glimmering hope and makes us wonder what impact could be achieved if the government backed such initiatives.