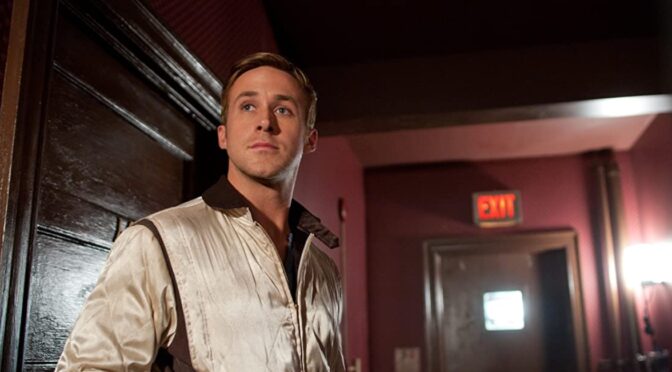 Following just over a decade since its initial release, the cult status of DRIVE continues thanks to its laconic dialogue, striking visuals and pulsing electronic soundtrack. However, perhaps the key ingredient to its success lies in its appeal as a Western. Although frequently described as a neo-noir when it first hit screens, the film’s romantic love story, gruelling violence and brooding, silent hero hark back to a distinctly classical vision of cowboys and guns, transplanted instead to the lawless vistas of Los Angeles.

“Get in. Get out. Get away.” So declares the distinctly minimalist tagline of Nicolas Winding Refn’s first entry into the Hollywood sphere. Conceived initially as a multimillion blockbuster starring Hugh Jackman, the initial script commissioned by Universal studios was, according to Refn, “much more in the vein of a $60 million FAST AND FURIOUS movie”. However, after working with scriptwriter Hossein Amini, the result was a much leaner, less action-focused narrative, where DRIVE’s central character – now played by Ryan Gosling – utters a total of 116 lines.

Gosling plays a nameless figure – referred to in the script simply as Driver – who spends his days as a car mechanic under the caring watch of father figure Shannon (Bryan Cranston) and moonlights as a getaway driver for LA’s criminal underworld using cars from the same garage. As Shannon notes before Driver embarks on the film’s first chase scene, “no one will be looking at you” – which is just how he likes it. That is until Driver becomes infatuated with Irene (Carey Mulligan), whose criminal husband Standard (Oscar Isaac) enlists him on a botched job that forces him to confront the perpetrators through increasingly violent methods.

At first glance, elements of the Western are not clearly in place. We are not in the familiar plains of the wild west, nor do we see any cowboy hats, ponchos or Toscano cigars a la Clint Eastwood. However, what we can see in thematic terms is the structure of the classical Western and its epitome, George Stevens’ 1953 film SHANE. The film follows a lone figure who rides into town on a horse, saves the community from the bad guys, then rides back into the wilderness from whence he came. Sound familiar?

“Horses are replaced with cars, with the saloon harbouring SHANE’s baddies switched for a pizzeria. Violence is a natural occurrence in these vicinities, as men are shot and stabbed with forks with barely a second thought.”

In his 1975 work Sixguns & Society, Will Wright sets out the genre of this particular Western iteration as “a lone stranger who rides into a troubled town and cleans it up, winning the respect of the townsfolk and the love of the schoolmarm”. Shane arrives in a town and uses his unique set of skills to rid the unnamed area of the oppressive cattle baron Rufus Ryker and his henchmen while gaining the respect of Marian (Jean Arthur) and her young son Joey (Brandon de Wilde). Similarly, Driver rides to the rescue of Irene and her child Benicio (Kaden Leos) and dispatches the gangsters threatening their lives. Horses are replaced with cars, with the saloon harbouring SHANE’s baddies switched for a pizzeria. Violence is a natural occurrence in these vicinities, as men are shot and stabbed with forks with barely a second thought.

Mystery is an essential aspect of audience appeal in both films, particularly with respect to their laconic central characters. The less you know, the more interesting they appear. Shane tersely informs the Starrett family that he is heading towards “One place or another”, just as Driver briefly tells Irene that he has been in LA “for a while” but gives no further details. Refn also increases the attraction of his silent hero through the central love story of Irene and Driver, established in this same scene through contrasting blues and oranges. Refn shows Irene smiling, framed to the left in front of a wall of warm orange tiles, whereas Driver is shot to the right in a blue-tinted mirror, with a smaller picture of Benicio and Standard in the corner. Through this visual metaphor, Driver – and his criminal connections – takes over from Standard as the family’s alpha male. Masculinity is continually asserted through saying less and doing more.

“Mystery is an essential aspect of audience appeal in both films, particularly with respect to their laconic central characters. The less you know, the more interesting they appear.”

In no scene is this clearer than the climactic standoff between Driver and archvillain Bernie Rose (Albert Brooks), where Refn intercuts between the interior of a Chinese restaurant and the exterior shots of the car park in which the stolen one million dollars is exchanged. Riffing on the iconic final duel in Sergio Leone’s THE GOOD, THE BAD AND THE UGLY, Driver and Rose’s expressions are sharply framed and juxtaposed as Rose informs Driver of Irene’s safety and Driver’s own need to be constantly looking over his shoulder because of his actions. Driver’s unsure glances in the restaurant create rising tension until Bernie stabs him outside in the car park. At that point, the camera cuts back to a rare, knowing smile from Driver before the camera returns to Driver retaliating by stabbing Bernie in turn.

Sitting still in the car, it is only when College’s iconic ‘A Real Hero’ begins to play that Driver’s survival is confirmed, and he drives into the distance, leaving the money behind in a particularly chivalric act. Like Shane, neither hero can stay within the communities they have purged from evil, and each departs into the distance. Immortal, indestructible and ultimately inscrutable, heroes don’t come more memorable in the cultural sphere than the toothpick-wielding, scorpion jacket-wearing figures that barely say a damn thing.

3 thoughts on “Drive at 10: Endurance of the Western”