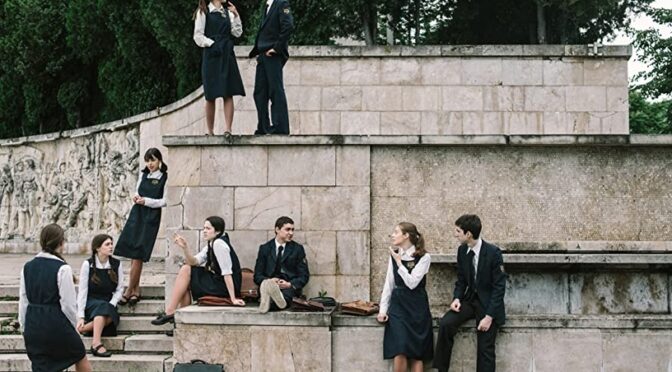 Writer and director Alexandru Belc’s feature debut is a slow, repetitive, but contemplative film. Despite being pitched as a love story, the film doesn’t fall into the stereotypical young love tropes; if anything, a romance is far from what the film aims to show.

Starring Mara Bugarin as Ana, Belc’s film relates a narrative set in communist-controlled Romania in the 1970s. The film follows Ana’s heartbreak of her boyfriend Sorin (Serban Lazarovici) leaving for Germany. However, conjoining this arc is the strict control of the secret police as Ana and her friends are caught and arrested for listening to the Metronom radio show, an illicit station in the eyes of the Romanian state, and writing a letter to the host for providing them with an alternative view of music and life.

Propaganda, conflict, manipulation, and a broken heart are the core of METRONOM’s message. The opening scenes establish the visual and emotional tone of the film from the very outset. Ana stands alone in a light rain waiting for Sorin, and when they meet there is a very intimate and serene atmosphere created by the lack of dialogue or sound and the use of close-ups and open-hearted body language. Beginning with this communicates the importance of this specific relationship throughout the film’s narrative. The stranglehold of communist Romania alongside this is openly foreshadowed by the washed-out and lifeless colour palette that dulls rather than brightens up the screen. The darker themes and the chosen narrative direction of the film separate it from a typical light and vivid romance that might be expected from Ana and Sorin’s initial relationship.

“Mara Bugarin gives an impressive and moving performance as the main protagonist, and her silence can be just as powerful as her spoken lines within the film’s second half.”

The narrative itself is a slow burner and has an unengaging beginning. The dialogue between the friendship group falls flat, and scenes appear repetitive: seemingly filling up the time until the next written climactic point. The relationship between Ana and Sorin in METRONOM is a dynamic and interesting way to relate political manipulation into a coming-of-age film narrative. Their relationship contains more physical aspects than it does dialogue, but still a continued sense of conversation and intimate understanding. Although it isn’t mentioned or seen visually as much as it is discussed, Ana and Sorin massively affect the outcomes of the film and its characters. Alongside using the newly blossoming relationship as a target for mistrust and political attack, Belc creates the dynamic as individual to Ana and the way she chooses to act throughout the narrative. Every behaviour or action Ana takes is a consequence of her relationship with Sorin. For instance, going to the Metronom party in the first place was to see Sorin as she is seen continually trying to hide that she is waiting for him. Furthermore, during police questioning, she is constantly thinking of the broken connection between them.

Structurally, METRONOM is fairly weak as the focus dramatically changes from heartbreak to prison cells in moments intended to be shocking. However, the build-up of the plot can be considered both enticing and thought-provoking in hindsight. Mara Bugarin gives an impressive and moving performance as the main protagonist, and her silence can be just as powerful as her spoken lines within the film’s second half. The deeper, more severe messages being portrayed, such as seeing Ana sitting small against a group of threatening, armed men, contain a sense of subtle meaning and purpose to METRONOM’s intention, and the film merely positions the audience to observe these emotions of hope and change.