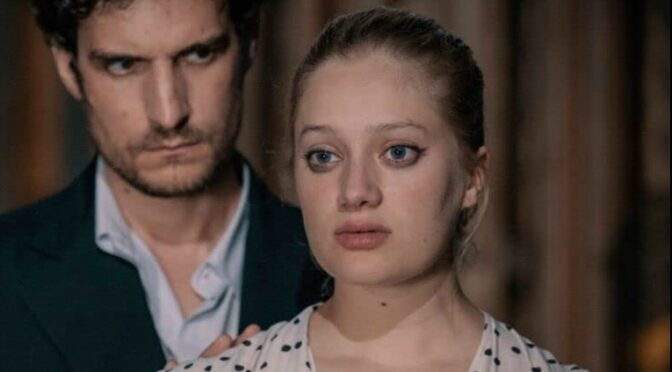 LES AMANDIERS emphasises a youthful perspective and the passing (or wasting) of time. In her fifth feature, director Valeria Bruni Tedeschi creates an ‘80s-era film that follows the youth and development of a group of twelve theatre students accepted into Patrice Chéreau’s Théâtre des Amandiers in Nanterre. Underlying the natural competition for a lead role and praise from a renowned director, the characters are written to represent the complexity and disruption of being young. From complex relationships to sudden death, LES AMANDIERS grows into an honest and compassionate coming of age narrative, showing the dwindling naivety beyond youth.

Tedeschi’s film immediately establishes a very specific retro and brightly-themed colour palette. The film has a grainy but charming aesthetic, with bold colour choices of red and blue being both visually pleasing and informative narrative devices. For instance, the main protagonist Stella’s (Nadia Tereszkiewicz) bright red winter coat has the audience’s eyes gravitate towards her, making her easy to point out and follow on screen.

The emotive directness of this film is presented through an observational form of cinematography. LES AMANDIERS further encourages an audience to be conscious of the camera and its movements within the film. As a result, the characters appear more vulnerable and honest, making the film less like a performance and artificially staged.

“As a cast and individuals, the actors are skilled in front of the camera. Still, regardless of their portrayal of sensitive issues, the characters feel like an indistinctive and stereotypical cinematic interpretation of youth.”

As a cast and individuals, the actors are skilled in front of the camera. Still, regardless of their portrayal of sensitive issues, the characters feel like an indistinctive and stereotypical cinematic interpretation of youth. An audience is expected to follow and unpack several complicated and deeply meaningful arcs from them despite brief timings and minimal background information. Further into the film, very little is exposed about several characters: some felt abandoned backstage rather than pulled into the spotlight.

The contrast of youth, time and death is often an interesting combination when observed through film, and LES AMANDIERS continues this. Its narrative structure is thorough and coverers a great deal. However, the need to reflect emotional communication causes many of these topics to be rushed. As a result, the narrative becomes hectic and chaotic. This could reflect the whirlwind emotions of young adults such as Stella or Étienne (Sofiane Bennacer), but it is debatable whether this is achieved realistically.

LES AMANDIERS merely invites its audience to observe and empathise; to create a deep understanding of human compassion and the nature of being young. The ending of the film is a perfect representation of what is being conveyed throughout the story. Being left alone with Stella on an empty stage and with her own words is both charming and deeply, soulfully emotional. There is a great deal to pick up from the underlying messages of this film, but this last picture of Stella reliving her happiest moments without the fear of losing something is a cathartic, sentimental ending to this film’s journey.