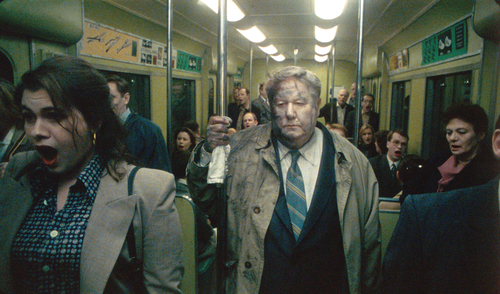 Following Roy Andersson’s successful EN KÄRLEKSHISTORIA forty years ago, producers were keen for him to start jumping through hoops. But he refused to play along. He withdrew for five years and failed to repeat his success – his second work, GILLIAP was a miserable flop. Andersson turned his hand to TV adverts, which offered him the creative free rein he needed. Over the years he developed a rich, eloquent visual style (Even Ingmar Bergman doesn’t put the telly on mute when Andersson features in a commercial break – he’s a genuine fan). The new millenium brought with it “film poem” SONGS FROM THE SECOND FLOOR: an absurdist, artistic treatment of Purgatory which deserves the Jury Prize it won at Cannes.

The almost entirely static camera captures beautifully arranged vignettes that are in turn comical, shocking and elegant. Andersson’s knowledge of art history and photography contribute to a grand, theatrical aesthetic that marries the domestic, the everyday and the mundane with baroque visual poetry. He uses a palette of worn pastels festooned with red splashes of car light, wine or hair. There’s never a shadow in sight – Andersson likes to call this approach “light without mercy” . The tenets of Abstract Expressionism and its Surrealist legacy shepherd the tired inhabitants of his surreal limbo – all sickly, obese, paralysed by madness or just plain world weary. Catch the sequel, YOU THE LIVING, at the Picturehouse if you can – despite being an ad man, Andersson is really too big for your TV.