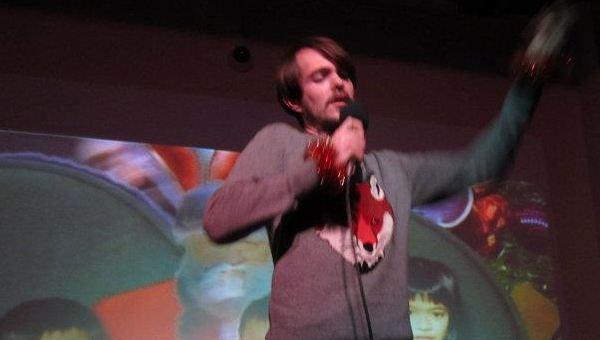 I start this December evening off by walking along the quiet, cold streets from Hackney Central station towards the welcoming stylised Hollywood Sign lights of the gorgeous new Hackney Picturehouse. Inside, I partake in the necessary beverage drinking to warm my cockles – having a bottle of the new London Fields Brewery Hackney Picturehouse Pale Ale, a really delicious beer. I have come dressed in a knitted jumper depicting a festive fox’s face on the chest, and adorned my arms with red and gold tinsel. I look a little bit like a twisted Bertie Bassett. Around me, waiting to go in to the screen, are some people dressed as sordid festive nuns, a Mr and Mrs Santa, and some people in very deep-cover (i.e. they haven’t dressed up at all).

The short films start, and they are a delight, ranging from a short called TREEVENGE in which christmas trees take revenge on their yuletide owners; a chilling ghost story for christmas called THE PHANTOM COACH; a Santa Claus serial killer short; and a charming 1950’s christmas advert for Gaylord the battery-operated puppy (complete with bone!). The audience are very receptive, bursting into applause after each short, and shaking their tinsel and baubles in appreciation at the cinematic offerings.

After the shorts, we travel up to the top of the Hackney Picturehouse to the aptly named Attic Space. Midnight Movies have set up a Santa’s Grotty Grotto next to the bar, and an interactive karaoke installation at the far end of the room. I sit on Santa’s lap (a lifelong ambition fulfilled), have my photo taken, and get given a festive present. Another guest, dressed as Santa, sits on Santa’s lap and tells me, “It’s a bit of a bizarre time-paradox. Theoretically, I don’t think I should touch him just in case I end time!” The other Santa looks on with envy, asking, “Can we swap costumes? Yours looks better than mine!”

Karaoke calls and I am suddenly up on stage giving a deep, baritone rendition of Paul McCartney’s “Wonderful Christmas Time”. I feel like a fool, but I’m having lots of fun, and the audience are clapping along – this is the point of a good Karaoke session after all. The audio is linked up to an impressive visualisation on the white wall behind me; there I am, larger than life on the wall, seemingly appearing in a 1970s version of Top of the Pops.

I am left feeling very festive, very merry, and with just a little longing to dress up as a reindeer the next day and do it all again…

For the penultimate number of the night, the DJ calls a large group of us up on stage and we all do our best to sing along to “Do They Know It’s Christmas Time?”. Michael and Nadya, the two wonderful organisers of the event, have really pulled off something special here. By 2am in the taxi back to Clapham, I am left feeling very festive, very merry, and with just a little longing to dress up as a reindeer the next day and do it all again. Midnight Movies have their next event on January 13th, and I strongly urge you to go along and give it a go. You’ll have a blooming marvellous time! 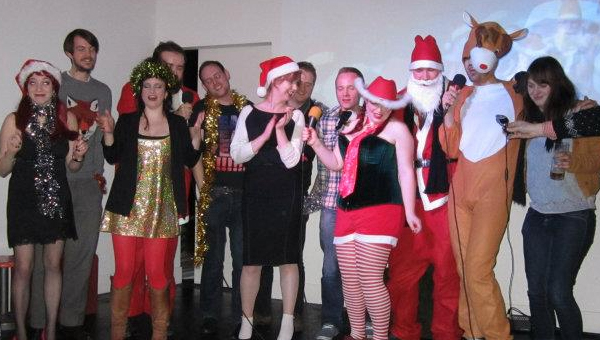