April McIntyre spoke to Amanda Mesaikos and Susanne Aichele of Random Cat about their short film CALEB which screens at this month’s sci-fi themed Reel Women event at the Cambridge Arts Picturehouse.

April: I’d love to hear more of how the idea for CALEB came about, what you wanted to convey and the process of putting it into production. 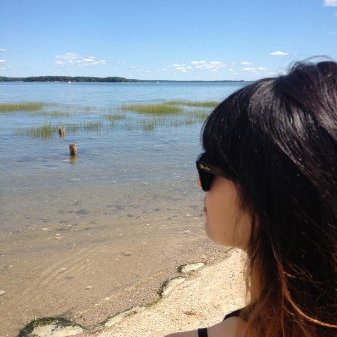 Amanda: We met whilst working on commercial projects, but discovered we had a common interest in telling narrative stories that mattered to us. After brainstorming several different ideas for short films, this one really stuck with us. Talk of 3D printing was everywhere at the time. At first we didn’t fully understand why everyone was making such a big deal about it (to be fair, at the time our experience was limited to simple plastic designs) but after researching the impacts it could have not just on manufacturing material goods but also in bioengineering, we began to wonder what people would be able to print next.

Susanne: Yes, it’s amazing that one day in the not too distant future people will be able to have a liver created for them out of their own cells but what else could this lead to? What if one day we could print an entire human body and copy our experiences and memories? Who would use this technology and why? We then thought, what if a kid printed himself at school one day because he felt lonely? What consequences could this have on a family and society as a whole?
Amanda: So ultimately we decided to explore dynamics that lie at the heart of a family and the effects of technology as it hurtles us into the future. It seems relevant to us as we’ve now become so immersed in technology and its influence on interaction and it’s fascinating to take it one step further and ponder on possible future impacts.

Once we had a script we were happy with, we reached out to our contacts in the commercials industry. We were so lucky to have such a talented crew to support us and help us realise our vision. We worked very closely with our DOP, Ewan Mulligan, on ensuring every shot conveyed a very specific specific message. We were also lucky to have found such a talented cast who believed in our story. It was a magical journey watching it all come to life.

April: The film seems to bring up interesting issues regarding motherhood. Sonia is averse to keeping both of the children whereas John seems keen. I think it’s still hard for society to view women as being un-maternal/not wanting more children etc. Were you trying to challenge this view?

Susanne: Yes, that was part of it. It was interesting hearing people’s feedback when first reading the script. Quite a few people commented on how they thought Sonia was an unsympathetic character or ‘unlikeable.’ We never felt this way about her. She works for a government agency involved in bioengineering and fully understands the consequences of what will happen to their entire family if they are found out. She’s just trying to protect her family so in essence she is still being maternal, perhaps just not in the way society is traditionally used to. We do feel it’s important to challenge the way we view motherhood and fatherhood but also how, on an individual level, be it for men or women, parenthood will challenge your views and decisions.

April: I love the subtle sense of future in CALEB. What made you decide to hold back on going too far with the futuristic element?

Amanda: Love that you picked up on this! This was super important for us in developing our production design. Whilst the film is set in the future we wanted our film to still feel grounded in a world that is recognizable to us. We designed a few key pieces of technology which would hint at the future but not make it the star of the show.

Susanne: Sci-fi as a genre has become much more psychology based and relatable to everyday experience as it’s no longer exploring the probability of technological advances but the impact on the self and society.

Amanda: The overall look of the film and our colour grade was inspired in part by EPA photos from the 1970s documenting the adverse effects of industry and modern live on our environment. We wanted to create this sort of hazy dream-like space between past and future. Something in between a dream and a nightmare.

April: I also got the sense that the film was highlighting issues around genetic engineering and designer babies, was this intentional?

Susanne: The connection between genetic engineering and designer babies was mostly unintentional. Our main focus was to explore what makes us human. If these two boys had the exact same memories and experiences what makes one less human than the other? What makes one less the family’s son than the other? Also once the boys stepped out of the 3D printer they start to become different people as they are having different experiences of the world.

Amanda: The greatest impact of films is what every viewer takes away from it, the variety of interpretations that start a conversation.

Take the opportunity to have that conversation with the Reel Women team at the screening of CALEB on 26 January at the Cambridge Arts Picturehouse!