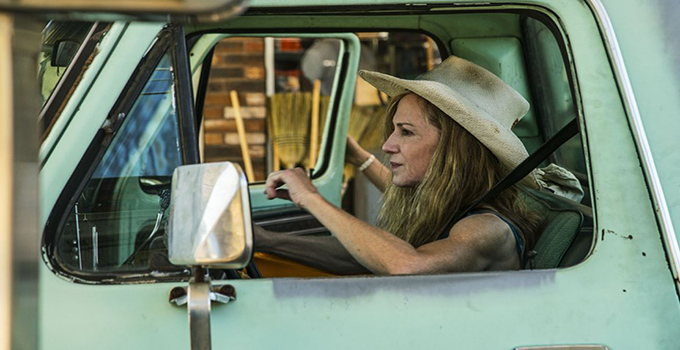 For a story of coming to terms with loss and grief, STRANGE WEATHER lacks the usual melodrama that similar stories often use as a crutch. As much a search for truth as it is justice, the excellent central performance from Holly Hunter is the pivot around which film manoeuvres.

Hunter plays Darcy Baylor, an administrator at a southern US university, who is still reeling from the suicide of her son. After it comes to light that the young man may have been exploited by his peers, whom she suspects contributed to his fragile state of mind, she sets out on the road with her friend Byrd (Carrie Coon) to try and understand and ultimately move on from the event.

STRANGE WEATHER is at pains to present the southern US in a more sympathetic light than clichéd hicksville, and the imagery and Katherine Dieckmann‘s sun-soaked visuals of the southern setting feel dusty and warm. The ability of Dieckmann’s script to subvert things in small ways is central to the effectiveness of the story.  There are no flashbacks to the pre-suicide days of Darcy’s relationship with her son (although Dieckmann told her Edinburgh audience she was pressured to do so by the film’s financiers), just the stories Darcy tells with the suspicion her tales are maybe slightly rose-tinted. Anton Chekhov would be particularly disappointed by the script’s use of a gun, but by not resorting to injecting unnecessary urgency or exaggerated high stakes, her characters are given room to breathe. Nobody is better placed to make use of that breathing room than Hunter herself. Darcy is by no means portrayed as a saint, with small details teased out which suggest that her role as a mother maybe wasn’t always as perfect as we might assume.

There’s a lightness of touch to Dieckmann’s direction which lends an air of spontaneity and authenticity to the character interactions. The story touches beats of the normal quest-for-justice type approach, Darcy crusading against a rich entitled arsehole ‘friend’ of her late son’s, and the advantages of the privileged are subtly woven in at different points. “Oh, we don’t have restrictions here” one rich community member says when her excessive sprinkler use in a drought is queried by Darcy. There are no soaring speeches, however, even if Darcy has plenty to say. Even the soundtrack provides an air of fairly calm reflection in the face of emotional turmoil: “Everything seems clear, and we’re alright” exalts Sharon Von Etten (who also scored the film) over the film’s closing.

STRANGE WEATHER occupies the same narrative space as a number of wronged-mother and suicide-aftermath pictures but the story seems more to do with achieving closure. In the face of terrible loss, just as people grieve differently they also move on and achieve that closure differently. By placing the faith in her own direction and characters, and not plot histrionics, Dieckmann’s intensely personal story feels all the more universal.