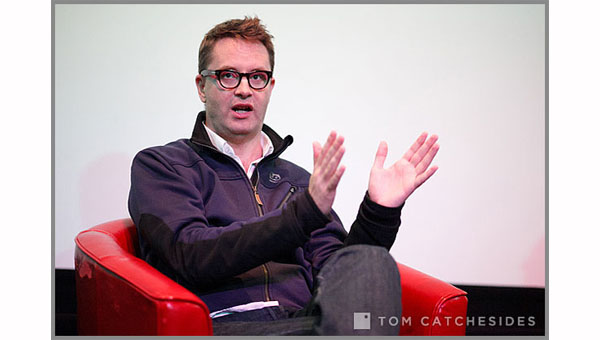 Dorian Stone: Youʼve spoken of the femininity in your ﬁlms yet a lot of your ﬁlms show extreme violence. Do you use the feminine aspect to temper the violence and, if so, why?

Nicolas Winding Refn: I donʼt know why but, you know, violent works…art basically consists of two emotions: sex and violence. And you can use the same mechanism for both expressions. I just tend to do more violence than sex. I try to do sex. It just ends up very violently.

DS: With DRIVE I got a feeling that it evoked a very eighties ﬁlm. When you’re approaching a city like LA, thatʼs been shot from a lot of different perspectives, how do you go about trying to create the character of the city?

NWR: I didnʼt. I just shoot whatever looks interesting. Itʼs not like a plan or anything. I just drive around town and say ʻI like that. I like thisʼ and then I just go and shoot it. I didnʼt have an agenda because I didnʼt know LA. I didnʼt know what hasnʼt been used. Whatʼs interesting about LA is that LA very much looked like an eighties city and it hasnʼt evolved since the eighties, so you automatically have that.

DS: How much were you influenced by other driving films, such as VANISHING POINT and THE DRIVER?

NWR: Well, thatʼs some great cinema. But a lot of the time I spent thinking about the Grimm’s fairytales – because that was the main inspiration for the movie.

Well the three greatest directors in the world, Stanley Kubrick, Sergio Leone and Jean Pierre Melville, were criticised for being ʻan exercise in styleʼ so I consider that a great compliment.

DS: The character of Irene was described by one critic as ʻa typical damsel in distressʼ. Would you agree with that point of view? If so, was it intentional?

NWR: I donʼt know how to comment on that. Is that a bad thing or a good thing?

DS: I think it was meant as a bad thing. I was just wondering what you wanted to portray with her character?

NWR: Well, she was a woman that was longing for human contact and the Driver appears. When she becomes in danger the Driver becomes her hero. Wouldnʼt you want to be saved by Ryan Gosling?

DS: With blockbusters becoming more idiotic, do you think itʼs important to challenge the audience?

NWR: I think itʼs vital to challenge the audience, because otherwise what they see has no meaning to it. Itʼs just how you challenge them, thatʼs the trick.

DS: I was going to ask you whether you took many risks with this film and if you felt particularly experimental. Someone wrote that it was ʻan exercise in styleʼ. What do you make of that?

NWR: Well the three greatest directors in the world, Stanley Kubrick, Sergio Leone and Jean Pierre Melville, were criticised for being ʻan exercise in styleʼ so I consider that a great compliment.

DS: Where did the idea of casting Bryan Cranston come from?

NWR: Iʼm a huge, massive fan of [the TV show] Breaking Bad. I had to pursue him because he has a lot of opportunities.

Iʼm a huge, massive fan of Breaking Bad. I had to pursue [Bryan Cranston] because he has a lot of opportunities.

DS: He also has a bit of a reputation for walking around sets in his underwear…

NWR: I didnʼt experience that.

DS: After the making of FEAR X you went bankrupt. What was the experience like and what have you learnt since then?

The financing fell apart while we were making it, which was OK. The problem was that the film wasnʼt commercial enough to sustain the amount of money it actually cost. It was basically too expensive for what it was. I learned to make sure that your films are not more expensive than what theyʼre worth. But itʼs a valuable lesson to learn but you donʼt learn it until you try to crash so itʼs very important for me to crash. I learnt a lot of things on that movie the hard way, but it was great because if I hadn’t done that then I wouldn’t have done PUSHER 2 and 3, I wouldnʼt have done BRONSON, I wouldnʼt have done VALHALLA RISING and I wouldnʼt have done DRIVE.

One thought on “Interview with Nicolas Winding Refn”