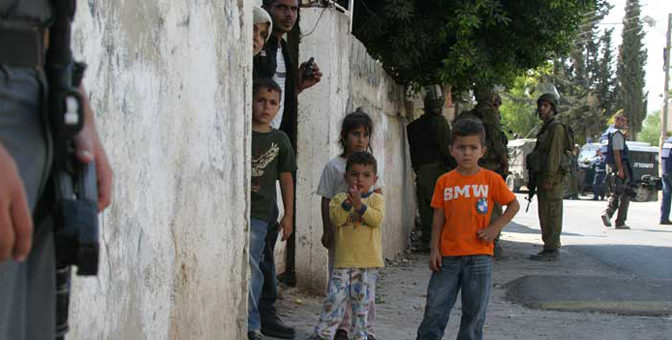 Not since NO END IN SIGHT, Charles Ferguson’s devastating documentary showing how corporate America stitched up Iraq during and after the 2003 war, have I come out of a film wanting to hit someone so much. Though judging from 5 BROKEN CAMERAS, taking a swing at the Israeli Army would only result in trailers being lowered into my garden as a means of occupation and my trees being burnt down. These, and many other outrages against Palestinian olive-growers living in the village of Bil’in on the West Bank, were recorded faithfully over five years by Emad Burnat.

He was making a home movie in 2005, capturing the first years of Gibreel, his fourth son. When Israeli surveyors then diggers start arriving on Palestinian soil Burnat turns his camera on them too. Pretty soon he, his family and the rest of the village are threatened by Israeli soldiers, who protect settlers from their country by using methods which include tear-gas, random shootings and dressing as Palestinians to act as agents provocateurs.

As grim concrete flats rise in the background and the villagers retaliate by building concrete barriers of their own, the pressure is stepped up – children are taken away in the night and Burnat’s family are evicted from their home, summarily declared a ‘closed military zone’. His filming is now under constant attack, not only from the occupiers (one camera is smashed by a bullet, another by a Jewish settler in his uniform of white shirt and black trousers) but from Burnat’s wife, who entreats him to stop filming for all their sakes.

…children are taken away in the night and Burnat’s family are evicted from their home, summarily declared a ‘closed military zone’.

But, in between filming Gibreel’s birthday parties, he persists and for his pains crashes into the Israeli barrier, losing another camera and being patched up in a Tel Aviv hospital, which Burnat reports saved his life given the inferior treatment he’d have received in a Palestinian equivalent. Just one of the dramatic ironies in 5 BROKEN CAMERAS, an extraordinary piece of guerilla film-making which has time among the brutality to establish family life and a village living in desperate circumstances. As Burnat’s matter-of-fact commentary remarks over a scene of hens in his backyard climbing up the trees, ‘They have their freedom’.