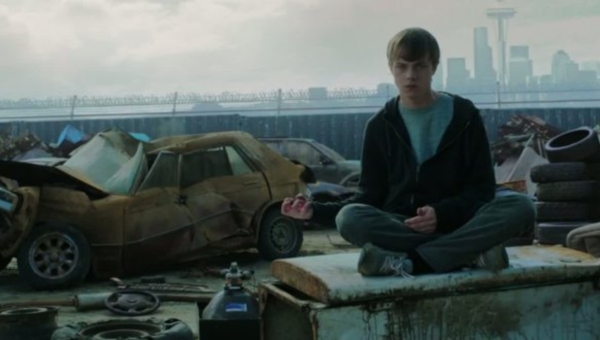 The first act of Chronicle faithfully follows a formula for superpower origin stories. At the bottom of a strange hole in the ground, three teenagers, Andrew (Dane DeHaan), his cousin Matt (Alex Russell), and their more popular classmate Steve (Michael B. Jordan) find a glowing crystalline object. Upon exposure, they experience nosebleeds and blackouts. Later, they find they can move objects with the power of their minds, and that with practice, this ability can be strengthened.

Andrew, misfit, loner, only child of an abusive alcoholic father and dying mother, seems like prime super-being material. “I’m recording this,” he tells his father through a locked, shaking door. “I’m recording everything from now on.” When Matt suggests that the camera forms a barrier between Andrew and other people, Andrew says, “Maybe I want a barrier.” The other actors competently portray adolescence, but DeHaan, a talented, heretofore little-known actor, brings a pinched, thoroughly authentic misery to Andrew, contributing to the film’s unexpected emotional gravity.

Current trends for found footage aside, Chronicle’s use of it has narrative function, even if many shots seem too neatly framed

Chronicle sticks close to Andrew: it’s his camera, and his story. Current trends for found footage aside, Chronicle’s use of it has narrative function, even if many shots seem too neatly framed. More fully in possession of his powers, Andrew makes the camera float overhead, emerging willingly into the frame for the first time. He films himself performing feats of strength. He begins to realize he can take the reins of his story away from blind circumstance. “She needs something stronger,” Andrew’s father says on the phone to the mother’s doctor, as we watch Andrew, in his room, lift and manipulate a spider. “I can become something stronger,” he tells Matt. The constant repetition of something stronger shadows the rest of the film, increasingly hinting at disaster, as the three friends attempt to control and codify the use of their powers.

Director John Trake and screenwriter Matt Landis have taken a nuanced, thoughtful, at times achingly realistic look at how superpowers would affect those who developed them. Chronicle, however, is not a morality play, and with great power comes only a wider scope for action based on all too human motivations. The action-packed, eerily un-scored climax of the film, cobbled together from security and police helicopter footage, is raw adrenaline straight from the veins of a teenager amped up on puberty and superpowers.

One thought on “Chronicle”