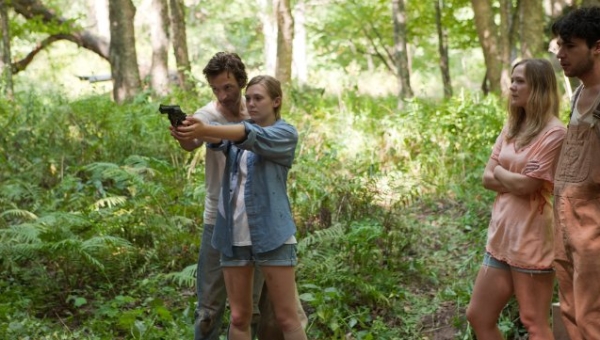 It’s striking to think that MARTHA MARCY MAY MARLENE features two newcomers in key positions, but director/writer Sean Durkin and, in particular, lead actress Elizabeth Olsen acquit themselves well in this tense and ominously ambiguous psychological drama; whose narrative is only slighted more twisted than your tongue after trying to say the title.

Olsen plays Martha, who has reunited with her sister after running away from a cultish commune under the leadership of John Hawkes’s sinister and charismatic Patrick. Undermining her previous identity by renaming her ‘Marcy May’, her time in the cult is marked by a series of abuses and brainwashing as Elizabeth’s previous life is slowly eroded.

A fractured narrative jumps between her stuttering recovery at the luxurious home of her sister and brother-in-law and her time in the cult. It leaves you suitably confused and raises as many questions as it answers. However, given the growing paranoia of Martha about being tracked down at her sister’s home, this opaqueness serves the film well in creating the mood and unease that seems to pervade her psyche. Peculiar behaviour, statements (“I’m a teacher and a leader”) and combative questioning of the rich couple’s lifestyle display her damaged and changed mindset from her time out in the Catskills.

Durkin’s drama has some of the visual trappings of a horror movie, and is extremely effective in establishing an uneasiness in what should be the safe surroundings of her sister’s home; this mirrors Martha’s own restlessness and rising paranoia. His direction isn’t perfect, with some elements from the cult scenes feeling less effective in reflecting Martha’s state of mind, without offering much in the way of how she found herself there in the first place.

Elizabeth Olsen is quite remarkable in her role, conveying a range of emotions without any histrionics. During the scenes of her early time in Patrick’s disturbing ‘family’ we see huge smiles that are never seen again, but are hinted at in the house scenes – making you believe she is on the road to recovery, only for paranoia to set in again. The movie settles heavily on Olsen’s face and you can see why – all at once it is a confused blank canvas and an intricate mural of emotions. Much of the film is dependent on her performance (although John Hawkes’s understated malevolence is well worth noting) and she pulls it off superbly.

MARTHA MARCY MAY MARLENE is not a film that will tell you anything, it is quite opposite, but this is not a disparaging statement; it is a film where the interest and tension lies in what is not said. Some viewers will find this a frustrating experience, particularly come the ending. Overall, though, this is a well constructed picture by Sean Durkin and the acting led brilliantly by a new talent in Olsen. If you can ask for a ticket without garbling the title then it’s well worth watching.

4 thoughts on “Martha Marcy May Marlene”