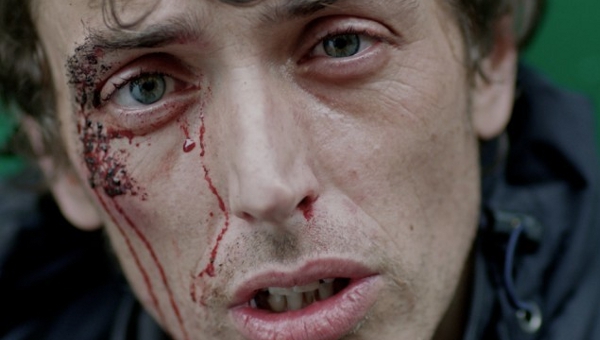 Richard Heslop’s FRANK follows a lonely, OCD-afflicted young man as he struggles to exist in a world beyond his understanding. Treading distinctly familiar, depressing and bleak ground, FRANK allows very little respite from the cluttered angst of the principal character’s aimless existence. The film tries to get us into the mindset of someone so totally at odds with the world they were born into, but in doing so, the relentlessly grim atmosphere becomes numbing.

Heslop’s stark camera work provides inventiveness where the characters and story do not.

FRANK isn’t entirely realist in its approach to a dank, social realist feel in the style of Mike Leigh or Ken Loach. Heslop has instead opted for a more surreal stance. Inspired by serial killer Dennis Nilsen, Heslop has Frank take washed up corpses he finds at the beach back to his home, for reasons never fully examined, where they take on lives of their own. Frank’s loneliness becomes so intense that he projects parts of his personality he can’t confront onto these cadavers. They know Frank as well as he knows himself because they are effectively him. This is intended to give us deeper insight into Frank’s head. However, all it serves to do is give us more disagreeable characters to watch in an already sparse list; the population of which, the lead included, have few redeeming qualities.

Heslop’s stark camera work provides inventiveness where the characters and story do not. His contrasts between Frank’s hellish hovel (a lot of work has clearly gone into the design his flat), the agoraphobic, sparse seaside landscapes and old factories are striking and further exemplify Frank’s loneliness and fear.

Heslop’s misguided attempt to make a hero out of a psychologically unstable young man does little more than to make you feel uncomfortable, and not in the intended way. The only respite from the dour affairs comes within thirty seconds of the end, and by that point the viewer is too desensitised to care.