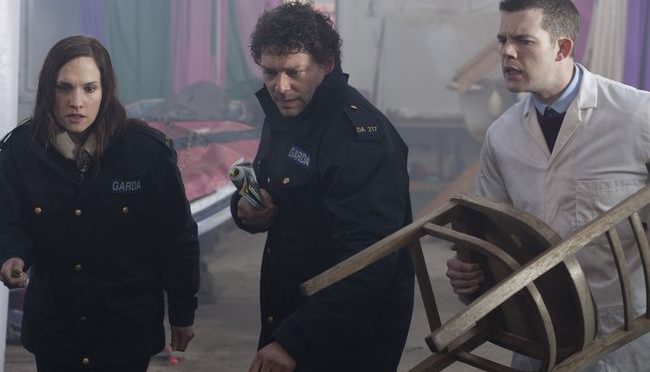 Galway Film Fleadh opened this week with GRABBERS, a monster comedy that takes the feel of TREMORS and adds a massive dose of Irish humour to create a genuinely jumpy, often hilarious romp.

On sleepy Erin Island off Ireland’s west coast, mildly depressed and heavy drinking local Garda Ciarán O’Shea is having a grump at being assigned uptight young Lisa Nolan from Dublin as his new partner. But there’s soon something fishy afoot when a boatload of fishermen disappear, quickly followed by a beach-load of dead whales washing up, and a local lobsterman catching something very odd and tentacly in his trap. Villagers start to go missing as Ciarán and Lisa scramble to discover what exactly is out to get them and realise their only hope of survival: booze.

GRABBERS really invites comparisons. It’s reminiscent of last year’s Irish hit THE GUARD, not just for its location and mismatched cop partners device, but for its eccentric characters and their fantastically mad turns of phrase. At times it screams out SHAUN OF THE DEAD, mostly because both films find great comedy in normal people being caught up in a horror movie and fighting it out in a pub. What’s more, the film abounds in little visual references to classics like ALIEN, TREMORS and GREMLINS.

‘…one of the few horror films where the effectiveness of the monster isn’t lost, despite frequently appearing on the screen…’

Yet these comparisons don’t lessen the film. Rather than appearing as clichés they establish the film firmly in its genre. The monster invasion is gripping and offers its fair share of shocks. It’s also one of the few horror films where the effectiveness of the monster isn’t lost, despite frequently appearing on the screen. This is thanks in no small part to great special effects, with a mixture of silicon rubber models and CGI creating some excellent creature scenes.

The film has a brilliant premise, and watching the two gardaí attempt to organise a piss-up in a brewery while fighting a giant tentacled monster is hugely enjoyable. However, it falters in its handling of the relationship between Ciarán and Lisa. A dispossessed country drunkard and a straight-laced city girl forced to team up; you can smell the romance a mile off and it doesn’t really ring true. It’s at its best with its smaller characters, who can happily inhabit their caricature status and who provide the most hilarious one-liners throughout the movie. Another perk is the excellent cinematography showing the stunning natural beauty of the coast of Donegal, where much of the film was shot.

It takes a little while to warm up, but GRABBERS very nearly sits alongside the classic monster movies it emulates. Be on the lookout for what writer Kevin Lehane and director Jon Wright come up with next.

One thought on “Grabbers”