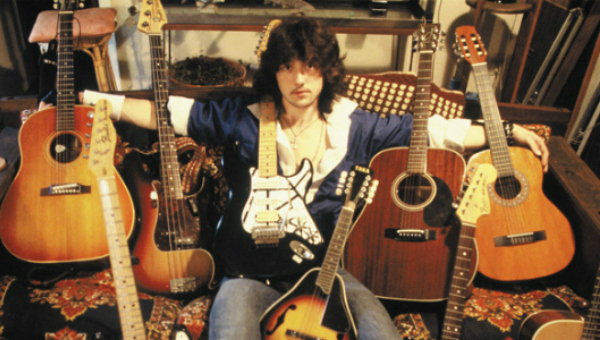 During the 80s Jason Becker was a hugely talented guitarist. At the age of 19, he was given one of the biggest gigs in the industry: lead guitar for David Lee Roth. But before he could live out his dream of becoming an idol to millions of teenagers he was struck with ALS, otherwise known as Lou Gehrig’s Disease. I spoke to first time director Jesse Vile about making his debut feature documentary JASON BECKER: NOT DEAD YET.

JV: Well, I first heard about him through a guitar teacher of mine. I was about 15 or 16 years old and he gave me a bunch of stuff to listen to and Jason’s music really stood out; and then when we talked more about his story and I read more about his story, it was just amazing to me. Not just his story but also his music. I mean, I really do love his music. And then I first got in touch with him when I was 19 in film school. I wanted to make a film with him but that never happened because I just had no experience and didn’t follow up with it. It was about 10 years later where I reconnected with him and decided to make the film.

DS: Have you always been a rock fan?

JV: Yeah, definitely. I’ve always been a fan of rock. I grew up in a household with parents who listen to Led Zeppelin, The Beatles and things like that so rock n roll has always been a big part of my life. As you get older you start to develop different tastes and exploring your own things. I got really into guitar music when I was a teenager, listening to guys who made guitar albums, essentially, and that’s the phase where Jason came along.

He’s just a human being who’s fighting to continue doing what he loves to do and to live his life.

DS: Was it always important to portray Jason in a normal light, rather than making him appear a saintlike figure that’s been afflicted with this terrible disease?

JV: Sure, we never want to make him anything but who he really is, and that’s Jason. He’s just a human being who’s fighting to continue doing what he loves to do and to live his life. The whole idea wasn’t to make him a martyr. We just tried to capture his true story, his true spirit, the spirit of his family and that’s what came out.

DS: Were Jason’s family at all hesitant to the idea of having his life put up on screen?

JV: They were open. They wanted a film for a very long time. Jason was open as well, but he was just very concerned that nothing was going to come of it. He gets people, fans, emailing him all the time wanting to do big, grand things for him and most of them don’t follow through so he’s going to have to choose his battles wisely. The kind of film I wanted to make meant a lot of work on behalf of Jason and his family. They were only prepared to get involved with something so intense and involved if it was going to be something good, and people were actually going to see, so they were hesitant at first but I worked my charm on them.

DS: What did you learn from the experience?

JV: From Jason and his family I learned that there is hope for people with a terrible affliction in their lives, whether it be a disease or a death in the family. And, also, I learned not to sweat the small stuff so much. I think if you’re having a bad day then I just look at Jason and the hardships he’s gone through. Where do I get off feeling so sad? He’s still so positive. I mean, he’s found a way to carry on being the same person regardless of his disease.

‘Jason Becker: Not Dead Yet’ [ Official Trailer] from Opus Pocus Films on Vimeo.