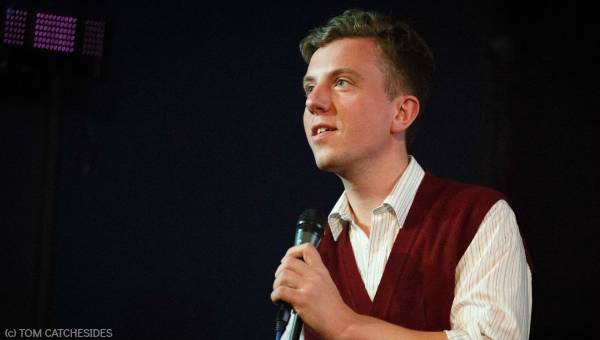 Following the collection of works, featuring or directed by Bruce Lacey, that he brought to the 2012 Cambridge Film Festival, I spoke to William Fowler, who is Curator of Artists’ Moving Image at the BFI (British Film Institute).

First, we talked about his role at the BFI, where he worked following graduation from UEA (the University of East Anglia, in Norwich), giving artists guidance about matters such as labelling their film-works and storing them optimally at home. Now, in what he sees as a complementary role, Fowler helps artists bring these works to the BFI for cataloguing, safe-keeping, and, where needed, restoration. (There are thousands of films, and, at a guess, around 300 artists are represented in the BFI’s holding.)

In fact, Lacey’s own films had needed restoration, and Fowler explained that there has been a recent retrospective of his work at South Bank. The BFI now has a touring programme of Lacey’s films, and this is what Fowler brought to Cambridge. That said, he is very keen to come back at some time with a longer Lacey work, rather than shorts or extracts from longer works (as THE LACEY RITUALS itself was, and apparently would have gone into different territory after what was shown in the first reel).

… even if enacting the ritual ‘doesn’t really work’, what is presented has ‘a magical quality’ …

I asked if there was any connection between artists’ books and artists’ films, and this possibility was one that Fowler was willing to consider, thinking that, whilst the former are usually produced in bulk, they tend to be the artist’s particular vision and to have been put together by him or her. As to who is an artist in the first place, certainly in this field (which used to be called personal film-making) – as in others in the art world (e.g. who was an impressionist painter) – it was acknowledged that there have been differing judgements in different decades, but artists’ films can be typified by being non-narrative works, typically the work of one person.

As a reference-point in discussion, we touched upon one of John Smith’s films that we both knew, called THE GIRL CHEWING GUM (1976) (which has been shown at Kettle’s Yard in Cambridge in the last few years), a work with a playful feel, which gradually draws attention to its status as an artefact through the interaction of images and a voice-over that seemingly directs them.

We turned to Bruce Lacey’s work, with its relations to popular culture (a different feel, Fowler felt, to what had been going on in the London Film Makers’ Co-operative, of which Smith was part) and to making films about ordinary individuals (as opposed to Warhol, portraying the world of celebrity).

Fowler was keen to stress that there is more going on with Lacey than clowning, and that Lacey can be confrontational: some important things that he identified (in commenting on THE LACEY RITUALS) are that there is a delight, for Lacey and his audience, ‘in something familiar’.

Fowler wanted to suggest that, even if enacting the ritual ‘doesn’t really work’, what is presented has ‘a magical quality’, despite (or, maybe, because it is?) ‘revelling in the predictable’. When I shared my response to EVERYBODY’S NOBODY, Fowler reflected that he finds the film more an expression of inventive, quiet satire than ‘a laugh-out-loud belly-laugh.’

Albert is an example of someone who, in terms of British societal views, ‘got ahead of himself’…

With ONE MAN BAND, as well as talking about the era, and what is shown of grimy, bombed London, there is a contrast with swinging, sexy London when Albert Hall (Lacey) is offered his big break. I mentioned the fit with Dylan in 1965, which interested Fowler, and we agreed that, even if the exact link might not be found to be there, Albert is an example of someone who, in terms of British societal views, ‘got ahead of himself’, and had been built up to fall (or, as I added, be pushed).

Lastly, we looked at THE FLYING ALBERTS and Fowler proposed that, unlike the period of Python, those featured in the film did military service, and that the work has particular resonances about the British Empire and deflating pomposity. It was clear from talking to Fowler that, as my reading had indicated, he goes beyond curatorship to have an archival interest, which stems from his time at UEA, in these artists’ films.

Speaking for myself, I should like to see more of such works, not just on a monitor at a gallery, but properly projected and with an audience keen to engage with them (rather than watching a couple of minutes and walking off).

One thought on “Interview with William Fowler”