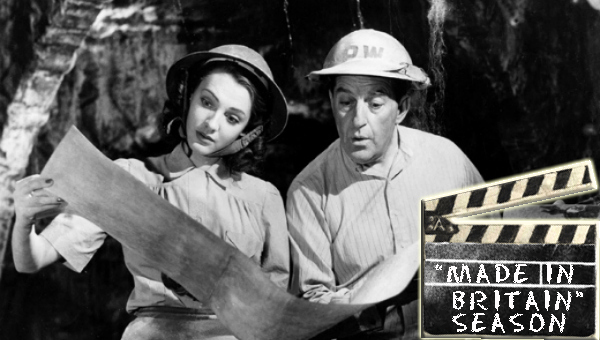 The Ealing brand is well known for its comedy output in the late 1940s and early 1950s, but 1949 was a particularly golden year even by their standards: in addition to PASSPORT TO PIMLICO, the studio released WHISKY GALORE! and possibly the most brilliant of them all, KIND HEARTS AND CORONETS. PIMLICO falls a notch or so beneath these two, but still ranks among the finest comedies ever to be made on these shores.

More than any other of their comedies, PIMLICO evokes the strongest sense of how it felt to be living in London during the immediate post-war period, with bomb craters (and indeed unexploded bombs) still pockmarking the streets, and derelict housing awaiting demolition being used as a playground by the local kids. Hitler had been defeated four years earlier but rationing was still very much in place and, judging by the mock dedication at the beginning of the film, a source of widespread resentment.

… you can’t help but cheer the Burgundians on, in the face of Whitehall’s dithering incompetence …

It’s clear whose side screenwriter T.E.B. Clarke is on. Taking aim at the tedium and misery inflicted by years of austerity, he imagines life being turned upside down, fairytale-like, by the discovery of buried French treasure beneath the streets of Pimlico. When it turns out their patch of London actually belongs to the Duke of Burgundy (“Blimey, I’m a foreigner!” as the local copper says), the community led by Stanley Holloway take full advantage of the fact, throwing out England’s laws and tearing up their ration books. Anarchy briefly reigns – the Sunday trading laws are seriously flouted – until a representative committee is formed and the locals start running things for themselves (the bank manager is appointed their Chancellor of the Exchequer, etc.), while HM Government tries to sort out the legal mess.

Naturally this sudden bout of rebellion and independence doesn’t last, but you can’t help but cheer the Burgundians on, in the face of Whitehall’s dithering incompetence (represented by those two splendidly English gentlemen of the silver screen, Basil Radford and Naunton Wayne). The escalation in hostilities between the breakaway state and its mother country is pumped up to ever farcical proportions, culminating in the dropping of emergency supplies by airlift, just as it was happening for real in Berlin. Clarke and director Henry Cornelius waste no opportunity to skewer the bureaucratic mindset of the English, as Customs officers from both sides police the borders and search every Underground train passing through the area.

It comes as a relief to all concerned when a solution that allows both sides to save face is found, and the Burgundians are almost happy to see a brand new ration book awaiting each of them at the party commemorating their reunification. It might be set in the aftermath of the war, but in this age of austerity, political devolution and the Big Society, it’s a matter of some surprise that PASSPORT TO PIMLICO hasn’t been selected for the remake treatment; it’s nearly as timely now as it was then.

The MADE IN BRITAIN season of restored classics continues on Tuesday 12th June when we’ll be reviewing PLAGUE OF THE ZOMBIES, screening at Cambridge Arts Picturehouse and cinemas across the country.

3 thoughts on “Passport to Pimlico”