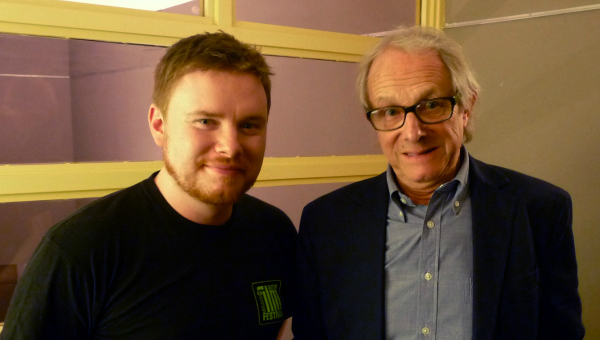 Ken Loach was recently in Cambridge to present a Q&A on his latest film, and winner of the Cannes Jury Prize, THE ANGELS’ SHARE. The screening was sold out and the film is still playing at the Arts Picturehouse. Jim Ross got the opportunity to talk to him for TAKE ONE beforehand.

Jim Ross: Let’s start by talking about THE ANGELS’ SHARE. To me the film seemed to be about young people who have nothing – they have no prospects or way out of trying situations. Do you think that’s a pertinent story to be telling now, in light of current politics and the riots last year, or do you think, sadly, this is story we’ll be telling again and again?

Ken Loach: I think it’s an ever-present situation really, which is getting worse. There’s a million unemployed young people now, probably over that, and that’s not in education, not in training – just unemployed. And that means we are effectively writing them off. What work they will get is casual work, agency work, like we just saw with these kids at the Jubilee. Now they’re being told they have to work for no money, which is extraordinary, I don’t think they even had that in the 1930s. So it’s a very harsh time for the country and I think it will get worse. There are literally hundreds of thousands of kids in this situation, and they know they’re being ripped off. They aren’t political in the sense that they are members of organisations, but they know that they’re being ripped off.

[Many young people] aren’t political in the sense that they are members of organisations, but they know that they’re being ripped off.

JR: Come the end of the film, I found the arc of Robbie, Paul Brannigan’s character, quite uplifting. Bearing in mind what we just said about writing people off, is that something you think was an important part of the film’s message?

KL: I think we were just trying to be unpredictable, really. The obvious thing to do is take characters like this and make a tragedy of it, but we thought you can tell the story about their situation and still make people smile. Show that these kids have some energy and ability. It’s about reflecting on what they’re capable of, rather than anything else, but also acknowledging their plight. Not, as some foolish people have suggested, that you can solve their problems with crime – that would be ludicrous.

The obvious thing to do is take characters like this and make a tragedy of it, but we thought you can tell the story about their situation and still make people smile.

JR: Throughout your career you’ve made use of non-professional actors and first-timers like Paul Brannigan. How do you make them comfortable and get the performance you want out of them? Or do you just let them do their thing?

KL: After a first meeting, you’ll hopefully get along and you’ll look for the ambience of the meeting. You have to put them in a situation where they can relate to the story and be true to that, and therefore themselves. You find out very early on if they’re going to be up for it, and then it’s a long period, about two months. I met Paul about 8 or 9 times in different situations and tried things out and balancing it with all the others we got in. It’s just a gradual process, which has to involve the right people but also the right kind of challenges. It should result in them feeling confident but not over-relaxed. It’s like playing a game, isn’t it? You’ve got to be confident that you’re the person to play, but you’re still wound up enough to play well.

JR: There are many bleak moments in the film, as dictated by Robbie’s situation, but there is a lot of humour in there as well. Do you think that naturally fell out of the characters depicted, that classic Glaswegian humour, or was it consciously included as a counterpoint?

KL: Well, that’s Paul [Laverty]’s writing really and a lot of it fits the characters and people doing it, so you have to get a match between the way the writer writes and the people you find to play the parts. It’s an absolute match, but it’s 95% there in the script.

JR: You’ve done quite a lot of work with Paul, what is it about that partnership that has a good creative spark?

KL: I think we tend to see the world in the same way, from the same point of view. We think the same things are important and enthuse and get angry about similar things. From those long conversations ideas will crystallise about what we should do, and then Paul will write a script. But I think we’ve almost got like the Taliban in challenging each other’s viewpoints and work, otherwise the great danger is that you slip into a lazy we’ve-been-here-before rut – you have to challenge each other. Just to say “You’re sure?”. Everybody comes from the same point of view, but you try not to give each other an easy ride in terms of accepting first ideas.

I’d like to annihilate [‘social realist’], along with ‘gritty’. I’d happily never see them again.

JR: One other thing I was curious about was the, lazy in my view, description of your work as that of a ‘social realist’. Is that a tag that annoys you?

KL: I’d like to annihilate that term, along with ‘gritty’. I’d happily never see them again. I think it just becomes a substitute for thinking – a pigeonhole. Why bother? It stops you evaluating the characters and situation, closing that down and setting up expectations. You won’t see it with an open mind. You don’t say you’re going to see a ‘social realist’ film and put on a long face. You want them to see what it has to offer.

JR: On a similar note, do you view much of your body of work as overtly political or, when that is used by critics, is it just a euphemism for ‘left-wing’?

KL: Well, both really. It is a lazy euphemism for left wing because all the films about posh people with no visible means of support are apparently not. Like, say, THE KING’S SPEECH, which I think is a pretty right-wing film. It endorses the idea of monarchy and gives itself a cheer when he manages to string two words together. It doesn’t question anything about the monarchy, or hierarchy, or privilege, or inherited wealth, political power residing in an ancestral family – it doesn’t challenge any of that. Right wing films accept the status quo, and if you accept that, that is accepting the inequality, injustices and the social patterns – which I think is pretty right wing. American films particularly – the pro-CIA films, pro-military. Even the film that won the Oscar…what was it?…(Jim mentions the THE HURT LOCKER). Yes, I mean the Oscar was dedicated to the American military! Never mind all the illegal wars, the million people illegally killed in Iraq – let’s dedicate it to the American military. That identifies the starting point for the film.

JR: Would you like to see more films that question that sort of viewpoint?

KL: Well, obviously to have a healthy cinema is to have a challenging cinema. Have less films that just accept the way things are, they’ll just send you to sleep while you eat the popcorn.

THE KING’S SPEECH […] is a pretty right-wing film. It endorses the idea of monarchy and gives itself a cheer when he manages to string two words together.

JR: You’re probably sick to the back teeth of talking about this, but I wanted to ask you about the censorship issue. This has come up before with, say, SWEET SIXTEEN, where language has been censored in your film. Do you think that is a battle the likes of yourself will eventually win, or will the organisations always lag slightly behind everyday use?

KL: Well it depends if the BBFC continues to view language as it does. If it does, language will develop so the words it’s upset about at the moment will become acceptable, then it will be another word. The words 40 years ago were very different to those 30 years ago, 20 years ago and so on. The current word that sends everyone into a shiver changes every decade or so. It’s foolish from that point of view, as they just end up looking stranded. They very much follow the dictation of Middle England and the sort of people who write in and complain about language. They’re obviously affected by that pressure.

The problem is for characters like those in the film it’s punctuation – it’s mainly there for rhythm. It’s used as a term of affection, even, or non-aggressively. It’s saying their daily language is not acceptable to use, whereas someone else’s is. It’s that sort of class bias which is really unacceptable. But it goes to a debate about what is bad language? Political euphemisms where ‘reform’ means ‘privatise’, or ‘modernise’ when they mean ‘sack people’ – is that bad language? It’s not saying what they mean.

JR: The stop-and-search scene I found quite interesting. It’s a humorous scene, but at the heart of it, there is the curiosity about what they were stopped for in the first place.

KL: Well, Rhino says “That copper knows me” – so he’s known to him and he knows if he stops him there’s a fair chance he’ll find something on him that he can pull him in for. There’s a general sense of harrying known offenders.

…what is bad language? Political euphemisms where ‘reform’ means ‘privatise’, or ‘modernise’ when they mean ‘sack people’ – is that bad language? It’s not saying what they mean.

JR: Do you think there’s too much of that – suspicion and making pre-judgements?

KL: Well, that’s why that’s there, yes. The whole film is against the stereotype that these young kids are written off as of no value. Hopefully you’ll see that they do have some value. I’m sure the police have the people they know of, who are actually often up to mischief on varying scales, and can bring them to station and have a laugh at their expense. In this case, especially when he sees Rhino in a kilt.

JR: When Paul was writing the script, was anyone aware of Bill Forsyth’s THAT SINKING FEELING? Tonally and plot-wise, there were some similarities for me.

KL: I haven’t seen it actually. Our references are never other films, Paul is not a great filmgoer and I’m certainly not. I can’t really talk about other films. So, no – but Paul is from Glasgow and that’s his language. You’ll find the same source material – Paul is probably drawing on similar things that Bill Forsyth was. It’s a similar humour, it’s very specific.

THE ANGELS’ SHARE is still playing at the Cambridge Arts Picturehouse.