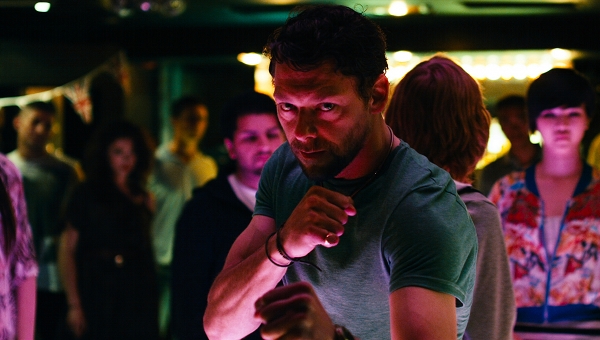 It is very telling that in the Q&A following the UK premiere of the PUSHER ‘reimagining’ at Hackney Picturehouse, the audience weren’t able to muster up any question besides “Were the drug scenes method acted?” – very little else is left a mystery. While it may not be deserving of the feared ‘another East End drug crime film’ label, the sad fact is that it is not far enough away from such a damning dismissal.

Aesthetically it is a striking contrast to Winding Refn’s PUSHER, yet it seems that a disproportionate emphasis was placed on reworking the way the film looks as opposed to more pressing issues of realism, localisation and relationships between characters. The argument has been made that, for this film to be anything more than an exercise in futility, it needed to retain the sophistication and depth of the original PUSHER’s sequels. The somewhat peripheral Tonny (played inimitably in the original by Winding Refn’s own De Niro, Mads Mikkelsen) became a tragic, almost Shakespearean character who lived to curry the favour of his father, only to explosively confront how reprehensible this father figure was.

The drug baron Milo, a role reprised in this latest version by the original actor Zlatko Burić, was seen to traverse the life of crime long enough to become redundant, finally seeking drug addiction support in the third film (which Winding Refn asserts as his favourite instalment of the trilogy). The fact that director Luis Preito’s intention was to steer clear of Winding Refn’s version and make a film of its own right is understandable, even admirable. However, the original narrative is not hugely deviated from at any point, and therefore it is safe to assume that at least very similar backstories and futures are relevant. In light of this, given that PUSHER II and III were detailed meditations on certain characters, there was sizeable potential to flesh-out many of the roles when revisiting the first instalment.

…Luis Preito’s intention to steer clear of Winding Refn’s version and make a film of its own right is understandable, even admirable. However, the original narrative is not hugely deviated from at any point…

Sadly, such an opportunity is swiftly squandered; there is never a feeling that Richard Coyle is immersed in the role of the central character of Frank. In fact, there is a sense that he perhaps deems the role beneath him. Similarly, Tony (played by Bronson Webb) is played to a hollow and unsympathetic Inbetweeners-esque comedic effect, working no consideration for this victim of circumstance into the performance. Given that Preito sternly warned his cast against watching the trilogy, these resultant performances are not surprising.

While it is preferable that the original performances are not thoughtlessly mirrored, a sense of why the roles were potentially more demanding than a typical drug crime film is harder to understand without seeing where the trilogy took them. Zlatko Burić’s return to the role of Milo is perhaps the most saddening performance, in that his doubtless talent is made evident and his appearance is fully passable, yet he seems painfully restrained from showing the full extent of what he is capable of bringing to this character – conceivably by virtue of being tired of returning to this role for the fourth time.

Given the inherent handicaps this film had even before detailed conception, a bizarrely shorter running time looked to kill any success that might have overcome the odds.

Many of these problems seem to stem from pacing issues, symptomatic of the clinical editing clearly implemented to satisfy a running time 20 minutes shorter than the original. Given the inherent handicaps this film had even before detailed conception (as both a remake of a cult film and as an addition to the oversaturated abundance of crime films set in London), a bizarrely shorter running time looked to kill any success that might have overcome the odds. This could be the fault of the director, however this film bears all the suspicious hallmarks of a disgruntled investor insisting that the film be shorter and vapidly ‘sexier’ than the Danish version. Moments of the original narrative, evidently deemed excessive and unimportant, are sorely missed. Most notably, the scene where Hakan, Milo’s go-to lackey, explains his aspirations to leave his work behind and own a restaurant, showing a warm humanity otherwise ignored; or the establishing scenes and montage exhibiting the friendship of Frank and Tonny, which when overlooked detracts from the impact of their relationship’s violent demise.

To this version’s credit, there are two truly remarkable performances that come from the least likely places. Daisy Lewis’ take on the role of drug mule and prostitute Danaka is superbly selfless and communicates a palpable vulnerability to a much wider extent than the previous iteration. It is her ability to express subtextual, off-screen events in her performance that see her outshine Coyle, as well as paradoxically invigorating his character with a more tangible sense of danger and unpredictability. Likewise, a narrative sequence from Winding Refn’s PUSHER, involving a desperate Frank pressuring a cripplingly drug dependent client (played by Bill Thomas) to pay his debts is given emotional accentuation through developing this character into a watery-eyed old man. Much can be said in praise of the direction of this scene, which is a rare glimpse at what a real reimagining could have been. For a fleeting moment, the film inventively showcases a scene of heightened empathy with a character that the audience is encouraged to worry for the safety of, only to see him disintegrate before our very eyes – no small feat given the sequence’s modest screen time comprising of two scenes.

For a fleeting moment, the film inventively showcases a scene of heightened empathy with a character that the audience is encouraged to worry for the safety of…

By and large, however, this film finds itself in the very confusing position of wanting to depict an unglamourised life of crime whilst at the same time being heavily box office conscious. To say this film is style over substance implies perhaps too much cinematographic depth, as it is at best viewed as an impressive music video. Rather instead, it would be apt to say the film is sheen over substance, with a regrettably shallow and arms-length regard for the actions, consequences and characters involved in the narrative where once there was hard-earned intimacy. As an entertainment piece for newcomers to PUSHER it may deliver, but nothing on the scale of Winding Refn’s trilogy is ever wholly achieved.