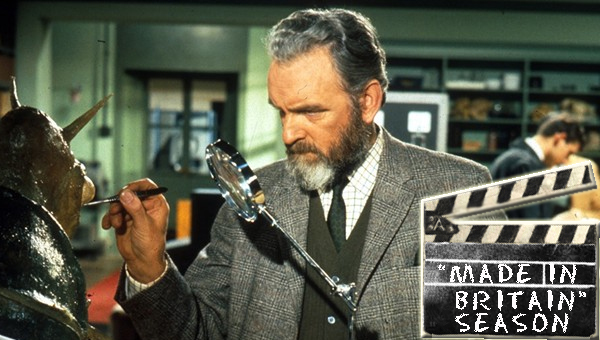 A jewel in the crown of British science-fiction, QUATERMASS AND THE PIT remains as taut and enthralling today as it was when first released over 40 years ago. Hammer’s third and final adaptation of the classic BBC TV series from genre mastermind Nigel Kneale deals with themes not too dissimilar from those of 2001: A SPACE ODYSSEY, released only a few months later, as well as this year’s considerably more expensive PROMETHEUS: speculating on the origins of human civilization, and how an alien race might have played a key role in our evolution. Kneale knew how to tell epic stories in a contemporary, down-to-earth way, making them not only credible but also financially feasible. This naturally made them appealing to low-budget studios like Hammer, whose earlier Quatermass movies – THE QUATERMASS EXPERIMENT and QUATERMASS 2 – had been instrumental in establishing its reputation as the home of horror.

Building works at the London tube station of Hobb’s End are interrupted when the skeletal remains of a primitive “ape-man” are unearthed, quickly followed by what appears to be an unexploded bomb. Archaeologist Dr. Roney (James Donald) is called in, along with bomb disposal expert Colonel Breen (Julian Glover). Initially along for the ride is Professor Quatermass (Andrew Keir), whose rocket research group Breen has been assigned to head up, much to Quatermass’ anger. But infighting takes a back seat after the startling discovery that the ‘bomb’ is in actual fact the remains of a Martian spacecraft from millions of years ago, still carrying its long-dead occupants – and that it still has the power to affect the inhabitants of Earth.

There was a ten year delay between the release of QUATERMASS 2 and its follow-up due to financing issues, but given the leap in scale and ambition this was probably a good thing. True, the special effects are still rather ropey, if somewhat endearing in an early DOCTOR WHO-ish sort of way; but the main bonus is the recasting of the role of Quatermass. Brian Donlevy played him in the two earlier films, but his tough guy interpretation was utterly wrong for the part. As played by Keir, the professor is a man of steely intelligence, an uncompromising intellectual determined to get to the bottom of the Hobb’s End mystery. It’s a strong performance, complemented perfectly by Donald’s Dr. Roney, a softer, warmer, yet no less rational man of science; a natural ally for Quatermass. Their polar opposite is Breen, whose closed mind and militaristic agenda is the real villain of the piece – never mind the Martians.

… a strong script, cast and crew overcoming the limitations of a low budget to deliver great entertainment …

The film’s creepy mixture of science and historical myth – a common trait of Kneale’s – makes it stand head and shoulders above other genre entries from the period, despite the fact that the story was by then ten years old. Director Roy Ward Baker builds a strong sense of eerie foreboding, beginning with the derelict houses on Hobb’s Lane (where local legends about unearthly visions are said to have persisted for centuries, as Quatermass discovers) and the investigation underground, before stepping up a gear when strange things start happening on the streets of London. The nigh-on apocalyptic climax, featuring the ghostly image of the Devil rising above the city’s skyline as its citizens run amok, is memorably chilling.

QUATERMASS AND THE PIT is an excellent example of Hammer, and by extension the British film industry, at its finest: a strong script, cast and crew overcoming the limitations of a low budget to deliver great entertainment that lives long in the memory. Its potent brew of primeval horror thrust in to a modern scientific age predates classics like ROSEMARY’S BABY and THE EXORCIST, and in science-fiction terms was unmatched until Ridley Scott directed a little movie called ALIEN. Not bad for a film about giant green locusts buried in the London Underground.

One thought on “Quatermass and the Pit”