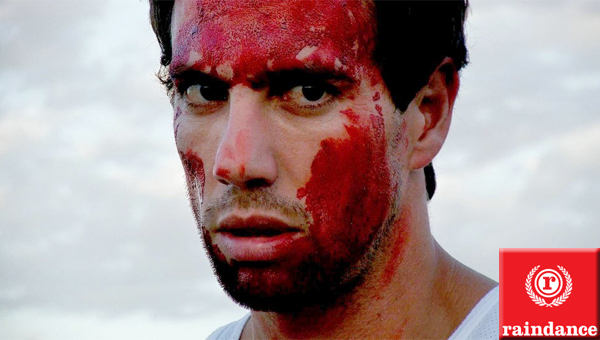 Filmmaker Paul Schoolman started taking theatre to prisons in the 1980s. Working with convicts at HM Prison Dartmoor, and against occasional opposition from Home Secretary Douglas Hurd, three scripts were eventually written called ‘Nonce’, ‘The Stone Hotel’ and ‘Julius Caesar’. Caesar, the basis for this film, took its cue from an unattributed quote about the Roman general being a waster, a degenerate and laughing stock until he was aged 33. Schoolman asks what happened to the guy before he was 33.

Filmed in three prisons in South Africa, Wales and Canada, the scenario slams up Roman politics with a bunch of cons. Some fairly well known actors play some of the leads, with actual prisoners playing the rest. Frequently obtuse, it’s often hard to follow as it covers the fallout between Lucius Cornelius Sulla and Gaius Marius in the Social War (91–88 BC) and other incidents in the early life of Julius Caesar including his mission to Bithynia and his abduction by pirates. Some of this is covered in The Twelve Caesars by Suetonius, and the rest came from Schoolman’s research. Probably due to its community aspects, STRINGCAESAR seems to want to over-explain its existence from the off. The title refers to string theory and parallel universes, giving a garbled explanation for why a bunch of criminals are taking an interest in obscure Roman politics. This is totally unnecessary.

As shown in A PROPHET and many other films, cut-throat politics suits a hothouse, artificial society like a prison. Derek Jacobi illustrates this perfectly as the bloodthirsty Sulla, shuffling deaths lists around for daily scheduling. As one of the professional actors involved, Jacobi at first looks at bit like Noël Coward in THE ITALIAN JOB but then starts to unleash the kind of menace that makes you believe that he could actually run a prison gang.

Generally the film spends most of its time in South Africa, and this is where it is most grounded. The cramped penal setting, and the use of most prisoners involved as a chorus, make it feel like a filmed version of promenade theatre. Schoolman’s camera often seems squashed in people’s faces as they gather in small rooms. Cardiff Prison ends up substituting as Bithynia when Caesar gets sent there and the change in (amateur) acting style jars considerably. Questioning why a prisoner from South Africa might get sent to Cardiff is stupid given the setup, but hearing the accents change or comparing the lack of bodies does register. Although some played up sexual tension, from the inmate playing King Nicomedes of Bithynia, make the journey worthwhile.

What makes this project so fascinating is that fact it happened at all.

Although exclusively filmed within prisons, STRINGCAESAR barely touches on the outside world. On one rare occasion, Jacobi spies on events outside his cell through the bars on his window using a mirror. The visual allusion created is that of a political class trapped in their social stations, compared to those trapped in a prison. There are too few of these moments.

Art-in-the-community projects rarely come off well on screen, although examples like AKENFIELD, THE ARBOR and SHAKESPEARE ON THE ESTATE just about pull it off. There’s always this tension between the needs of the people taking part and those of the audience. STRINGCAESAR is no exception. What makes this project so fascinating is that fact it happened at all. Anyone against the rehabilitation of prisoners will be appalled by what this film tries to do. As a sign of the times, one of the targets of BBC3 satirical comedy ‘The Revolution Will Be Televised’ was the provision of free education to prisoners in the UK. They should have broadcast STRINGCAESAR instead.