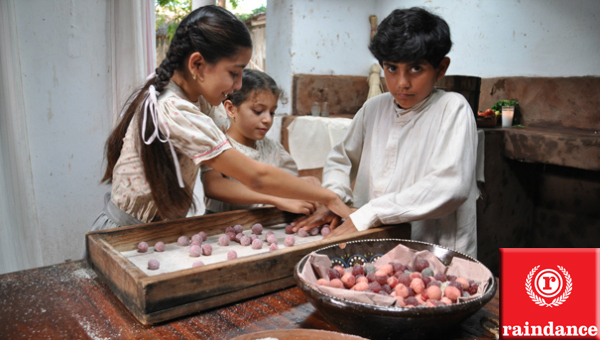 Closing with the braying of a burro, DONKEYS suggests that people are as stubborn as, well, donkeys. Or at least as stubborn as a small Mexican boy can be, when doused in a gentle patter of magical realism. Yet what’s more dispiriting, given the fantasy, is the intimation that nothing ever changes. An exiled boy will return home to repeat his dead father’s destiny.

Set in the Mexican south in the 1940s the destiny in question is that of Lautaro, a pre-teen who is bundled off into the arms of distant relatives when his father gets shot dead. Ending up at his aunty Emma’s house opens up a world of hard chores, and the peccadillos of this branch of the family. Tasked with keeping the village school stocked up with water, Lautaro discovers a room more akin to a Fortean museum than a place of conventional learning. Blackboards give way to stuffed animal heads, archaeological artefacts and esoteric books on spiritualism. Unsurprisingly in such an environment, Lautaro’s imagination runs riot, conjuring up conquistadors and speedboats.

Given the closeness of magical realism to fairy tales it hardly surprises that a story like this might lead somewhere depressing; just take PAN’S LABYRINTH. Unlike Guillermo del Toro’s film, though, the political backstory is much more subtle, much more local. DONKEYS is also far less emotive.

Given the Dickensian levels of diversity in Lautaro’s family, Flores slaps the watercolours on too thick…

There are few clues to the period in which the film is set, and few overt reasons given why Lautaro’s family are so keen to spirit him away so fast. As is slowly revealed in flashback, his father alienates local farmers by trying to follow central government law. Later, two girls staying at the house of another aunt, Dona Carmela, are revealed to have been orphaned – in circumstances never fully explained by the adults. Pointedly, Lautaro is surrounded by women, after the death of his father at the start – suggesting a volatile community expecting retribution. One of the few men he meets before he leaves home gestures to his holster. Lautaro departs shortly thereafter.

Director Odin Salazar Flores has fun presenting Lautaro’s viewpoint as a ten-year old with has an on-going fascination with mint humbugs. After finding a coin lying in the road, Lautaro rushes off to buy a packet of sweets. Flores then takes the time to show the different way people eat sweets. For example, one relative takes two with a glass of water.

Flores paints the kind of childhood setting to which anyone might want to retreat on a stressful day: one full of summer countryside and adventure. Given the Dickensian levels of diversity in Lautaro’s family, Flores slaps the watercolours on too thick. It’s all too easy to wallow in the idyllic landscapes. Yet despite playing, dreaming and eating sweets, Lautaro returns home to a very uncertain future. The shadow of a vendetta looms over him and the entire film.