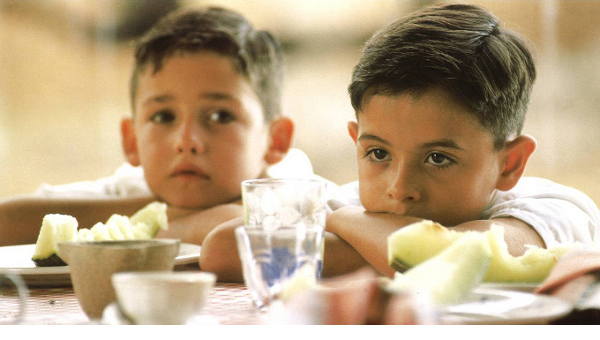 A small town in Valencia, where nothing has happened for a thousand years. And as the Franco dictatorship, in unholy alliance with the Catholic Church, keeps the population under strict control, nothing untoward looks likely to happen in the foreseeable future either.

10-year old Fernando Torres (sic) and his brother Pepin are orphaned and sent to live with their uncles Tomas and Ramonet. The next fifteen years, taking us neatly and symbolically to the demise of General Franco and his regime in 1975, are spent in a blur of smoking, drinking, whoring, gambling, furniture-making and illegal boxing.

Orchestrating the boys’ coming of age is Santiago Ramos as Tomas, in looks and level of mischievous energy a ringer for Al Pacino in THE DEVIL’S ADVOCATE, also released in 1997. Uncle Ramonet is more withdrawn and has a dark secret (which is no secret at all to the audience) but which must be kept hidden from the authorities, along with all the other pretty misdemeanours perpetrated by Tomas and his eager disciples.

As the moonshine scotch takes gradual hold of his actions Tomas becomes more brazen in his contempt for the ‘grey sardines’ who are Franco’s militia: official revenge follows when the Church refuses to let the boys’ grandfather be buried in consecrated ground. This precipitates a declaration of war from Tomas: a large parma ham is among the first targets, one of the film’s many well-staged set-pieces. Also skilfully drawn is the growing independence of the boys as they become men (played by three different pairs of actors) and assert themselves and their own identities through schemes ranging from the furniture-making to running their own bar.

All of this makes for a highly satisfactory movie experience. THANKS FOR THE TIP is well-shot with a vibrant sense of place and community. The title refers to sexual performance, naturally a central part of the boys’ development, though there is a touch of grotesquerie in the attitude towards sex and the women who provide it, a sort of Fellini-lite. But overall, there’s no doubting Francesc Bellmunt’s heart is in the right place, that is, on the left.