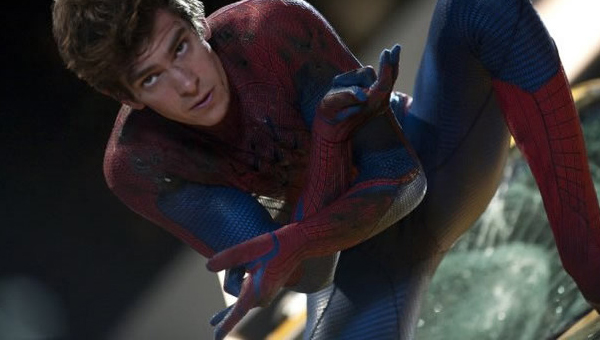 Swapping the bright colours and ‘Aw, shucks’ attitude of Sam Raimi’s original trilogy for a slightly darker palette and a more angsty tone, director Marc Webb’s superhero reboot provides strong proof that there is always room for a different perspective on a popular long-running character. The decision to go back to Spider-Man’s roots certainly makes narrative as well as business sense: more story opportunities about a young Peter Parker coming to terms with his new-found powers, while also allowing the studio to go after the same romantic fantasy audience that delivered gargantuan box-office returns for TWILIGHT and THE HUNGER GAMES. Parker is a rather introverted character here – more broody, less cartoony – and as his romance with Gwen Stacey takes centre stage, some of the comic-book fun and thrills are pushed to the margins.

Garfield is a terrific Peter Parker, full of nervous energy.

The script (by James Vanderbilt, Alvin Sargent and Steve Kloves) kicks off with Peter Parker as a small boy being left with his Uncle Ben (Martin Sheen) and Aunt May (Sally Field) by his parents, who disappear shortly afterwards, apparently killed in a plane crash. Skipping forward a few years, high school student Parker (Andrew Garfield) begins a tentative romance with sweetheart Gwen (Emma Stone) while simultaneously investigating his father’s top secret scientific research with the one-armed Dr Curt Connors (Rhys Ifans) on cross-species genetics. Parker’s snooping results in a bite from a radioactive spider (who saw that coming?), and a whole new life opens up before him.

Not only does the film revisit the origins of Spidey, it also juggles a brand new villain – The Lizard – as well as a new sequel-friendly plot thread about the fate of Parker’s parents (hint: hang around during the end credits). Thankfully it just about succeeds in having its cake and eating it. Garfield is a terrific Peter Parker, full of nervous energy. His take on the character is more of a loner than Tobey Maguire’s, becoming a hit on YouTube with his wall-crawling acrobatics and skateboarding round the city wearing a hoodie. He and Stone share a strong onscreen chemistry, which is the key to the film’s success. Their relationship is beautifully sweet and believable; you certainly can’t accuse this new Spidey of lacking heart.

If a superhero movie is only as good as its villain, then it’s here the main problem lies…

But elsewhere Webb loses focus. For a film about a guy swinging through the concrete jungle of Manhattan, the action scenes don’t really do him justice (with the notable exceptions of Stan Lee’s cameo and a late sequence involving a few cranes). If a superhero movie is only as good as its villain, then it’s here the main problem lies. Ifans’ Dr Connors is a sympathetic bad guy, but never comes to close generating any real menace except when he transforms into a big CGI lizard. He’s also a strange choice of villain; his only apparent virtue being the fact that he was never used in the earlier films. A giant lizard does seem rather at odds with the film’s emphasis on grounded emotional realism.

It’s possible to nit-pick other aspects too – James Horner’s dull score, the rather perfunctory way Parker chooses his alter ego’s name and costume – but none of these are show-stoppers. This new Spider-Man is fun, engaging and likeable; just never amazing.

5 thoughts on “The Amazing Spider-Man”