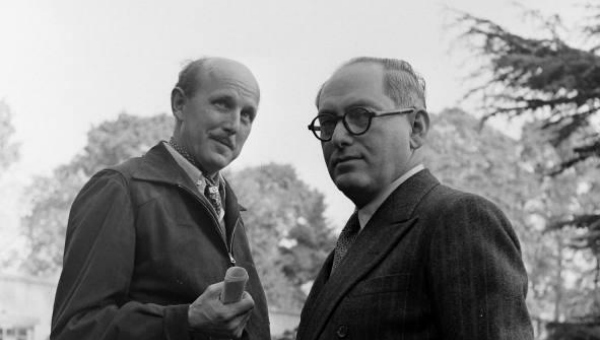 There’s a moment in A CANTERBURY TALE (1944), one of the less celebrated films in the oeuvre of Michael Powell and Emeric Pressburger, which neatly sums up their importance in the history of British cinema. As the film begins, a group of medieval travellers are riding down Pilgrims’ Way to Canterbury, journeying to the grave of Thomas Becket. Up above, a hawk flies through the sky as his keeper watches below. As the camera follows the bird, the film cuts from one flying object to another – the hawk becomes a Spitfire, roaring loudly through the air, watched by a soldier below; and we have travelled through 600 years of English history in the blink of an eye. Below, a modern group of pilgrims are making their way to Canterbury, but this time they are servicemen and women, making their way to their respective positions in the war effort.

… this filmmaking duo was never especially concerned with what was fashionable.

This simple cut (one that predates Stanley Kubrick’s bone/satellite match cut from 2001: A SPACE ODYSSEY by nearly a quarter of a century) demonstrates Powell and Pressburger’s technical and artistic brilliance, as well as one of their recurring themes: Britain, its history and what it means to be British. These themes crop up time and again, beginning with their first masterpiece, THE LIFE AND DEATH OF COLONEL BLIMP (1943), which was recently restored and reissued. Both a warning about military complacency, and an examination of British values in a conflict that threatens to obscure them, the film unfashionably featured a sympathetic German character in a key supporting role. This earned it a great deal of criticism and suspicion, not least from Prime Minister Winston Churchill, who tried to prevent its release. But this filmmaking duo was never especially concerned with what was fashionable.

Michael Powell and Emeric Pressburger first collaborated on WWI thriller THE SPY IN BLACK (1939). They got on so well they made a further three wartime propaganda films together, the last of which, ONE OF OUR AIRCRAFT IS MISSING (1942), was the first to be made under their own production banner: The Archers. Under this arrangement, their films were credited as having been written, produced and directed by both of them; although in practice, Powell did the bulk of directing, while Pressburger largely dealt with the production. They continued to make films as a partnership until 1957’s ILL MET BY MOONLIGHT, only collaborating in later years on a couple of minor productions.

Most agree that their finest work came during and immediately after the Second World War. Certainly, on a purely superficial level, it’s impossible not to be dazzled by the Technicolor gloss of their three greatest works: A MATTER OF LIFE AND DEATH (1946), BLACK NARCISSUS (1947) and THE RED SHOES (1948). All three boasted masterly cinematography from Jack Cardiff, richly expressing the barely repressed passion of these tales of love denied, lost or regained. When Cardiff latterly became unavailable, Christopher Challis, who worked with Cardiff on the three, stepped up to replace him and did a terrific job on later efforts such as GONE TO EARTH (1950). For a country recovering from the trauma of war and still subject to rationing, these films must have felt like a window into another world.

This was precisely the desired effect when it came to the stories the Archers brought to the screen. Their peculiar brand of heightened melodrama and fantastical flights of fancy are quite unlike anything else from the same period: the black-and-white, austere and rather dull afterlife juxtaposed with the Technicolor vibrancy of the real world in A MATTER OF LIFE AND DEATH; the exotic, untamed Himalayan landscape and its locals shattering the spiritual calm and moral restraint of a convent of nuns in BLACK NARCISSUS; and the utterly bewitching ballet sequence in THE RED SHOES, when the film leaps from conventional narrative in to a world of its own imagination – a moment which surely ranks as one of the finest in the history of cinema. These were all very much at odds with the social realism approach to filmmaking championed by the likes of producer Michael Balcon during the same period.

Powell’s passion for the British landscape, and its spiritual connection with the people who live there, made its way into several of his films. It is at its strongest in a pair of movies made during the war: the aforementioned A CANTERBURY TALE, where rural Kent is the focus, and, at the other end of Britain, I KNOW WHERE I’M GOING! (1945); a typically oddball romantic comedy centring on a woman (Wendy Hiller) whose materialistic personality is put to the test by the wild, rugged environment of a remote Scottish island, where she has gone to marry a laird for purely mercenary reasons. Remote Scottish islands also featured heavily in two earlier Powell features: THE SPY IN BLACK and THE EDGE OF THE WORLD (1937).

Powell later returned to these rural ruminations with the somewhat underappreciated GONE TO EARTH, an adaptation of Mary Webb’s novel about a gypsy’s daughter who is trapped in a love triangle with a vicar and a squire, but whose only true desire is the freedom to roam the countryside with her beloved animals. An ancient and mystical bond exists between the land and its inhabitants in Powell’s films; locals respect it, but outsiders – normally town or city dwellers – who challenge or ignore it will inevitably succumb to its power, eventually discovering a newfound respect for the people and surroundings.

Aside from their technical and artistic merits, one of the defining characteristics of an Archers production is its cast, many of whom became frequent collaborators. First choice for the starring role of Clive Candy in THE LIFE AND DEATH OF COLONEL BLIMP was Laurence Olivier, but when his service duties made him unavailable, Powell cast Roger Livesey, who grabbed with both hands the role of a lifetime: literally a lifetime, as he portrays Candy from the beginning of his army career as a cavalier young officer in the Boer War through to his days as a doddering retired General in World War II. Livesey is magnificent, turning the seemingly buffoonish Candy into a fully rounded human whose blustering exterior hides a history marked with tragedy and loss.

He would return in two further Archers productions, A MATTER OF LIFE AND DEATH and I KNOW WHERE I’M GOING!, and he’s superb in both. Other key acting talent such as Kathleen Byron, Marius Goring, Anton Walbrook, Moira Shearer and David Farrar also made encore performances in Archers productions. It’s worth remembering, too, that Powell and Pressburger are credited with writing unusually strong female roles into their films. Wendy Hiller in I KNOW WHERE I’M GOING! plays an independent woman marrying a man purely for his money; Deborah Kerr’s Sister Clodagh tries to manage a self-sufficient community of nuns in one of the most remote locations on the planet while struggling with her own desires and demons; while THE RED SHOES focuses on a woman (ballet dancer Shearer) forced to choose between her marriage and her career.

Contemporary critics weren’t always kind to their productions (though nothing came close to the hiding Powell received in 1960 for his shocking serial killer thriller PEEPING TOM (1960), which all but destroyed his career). But Powell and Pressburger’s films underwent a blossoming in the 1970s when they were reappraised and championed by the likes of Martin Scorsese, who continues to be influenced by them today (for proof, look no further than the shot of Leonardo DiCaprio running down a spiral staircase in SHUTTER ISLAND, a scene which riffs on a key moment in THE RED SHOES). Their legacy has been not only to influence a generation of filmmakers, but also an enriching of cinema itself: a catalogue of films that effortlessly combined complex, rewarding stories with a frequently astonishing visual artistry.

2 thoughts on “The Wonderful Worlds of Powell & Pressburger”