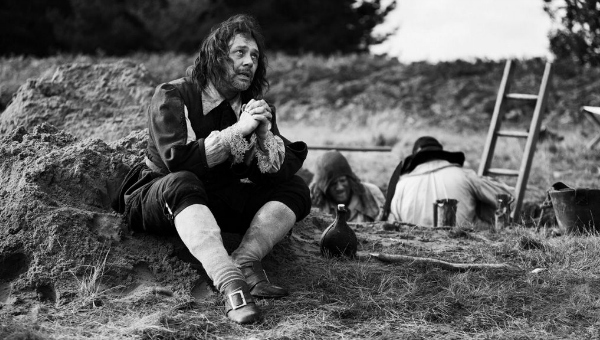 Mushroom gothic from Wheatley: A FIELD IN ENGLAND will make history tomorrow when it becomes the first UK film to be released simultaneously at the cinema, Film4, VOD and DVD. Toby Miller of Cambridge 105’s Bums On Seats interviewed Gabriel Swartland, Head of Communications at City Screen, about this multi-platform release.

Toby Miller: The unique manner A FIELD IN ENGLAND is being distributed is the work of many partnerships, perhaps most notably between FILM 4.0 – Film 4’s hub for innovative screenings -and the BFI New Models Distribution Fund.

Gabriel Swartland:  The BFI New Models Distribution Fund is very new, and is very much about assisting release strategies that  are attempting something a little bit different in terms of distribution. [A FIELD IN ENGLAND] is very much an experimental release in terms of wanting to see whether or not [there is] still an appetite for an audience to see this film in a cinema as it was intended by the filmmakers; likewise, those who choose to experience their films on DVD and Blu-ray, perhaps fans of the filmmakers, are they still likely to buy the DVD and Blu-ray? Will they buy more of it because of the concentration of marketing and press around a single release date?

Picturehouse believe some people, given the choice, will still opt for the cinema experience…

What effect does free to air TV bring to the equation, does it actually broaden the audience for what is a niche product, which we believe it could well do? Or does it have an impact on theatrical sales and likewise DVD and Blu-ray or VOD downloads? So it is an experimental release in that respect, but all the partners involved are very excited about A FIELD IN ENGLAND going down this path. […]With a converging of the platforms, the release date of 5 July enables us to concentrate all of the partners’ marketing muscle and […] make more noise, and give all those platforms an equal chance. […] We believe that Picturehouse believe some people, given the choice, will still opt for the cinema experience as the best means to discover a new film.

TM: This has obviously been tried before in 2006 when Steven Soderbergh released the drama BUBBLE – which went straight to cinemas at the same time as it went to cable and to DVD. There was a lot of press about that at the time, but then nothing happened afterwards. What do you think has changed in the years since then?

GS: I think certain things have changed, certainly things like the take up of video on demand and how people consume media in terms of the proliferation of VOD platforms: subscription VOD for example, transactional VOD. Likewise PVRs – how people are actually consuming live television, pre-recording and then watching when they want to. And all of this has had an effect on DVD sales, Blu-ray sales – while they’re still an important part of a release, they aren’t quite delivering the numbers they used to 3, 4, 5 years ago. And so [it] is an ever changing landscape when it comes to releasing a film. But I think ultimately for an experiment like this to happen, you kind of need almost a perfect storm of partners involved. The big question mark is almost always around the cinema partner, the theatrical partner, which is why we are kind of uniquely placed to join both Film4 and 4DVD and the producers on this experiment.

Is there possibly an issue here that the small films ironically need conglomerate distributors?

They came to us with an initial idea, because we as a cinema company have done similar things in the past: THE ROAD TO GUANTANAMO, for example, we screened in cinemas around the time it had a TV screening. Likewise, THE SEPTEMBER ISSUE I believe followed on TV a week after it came to cinemas, but we found ourselves actually still keeping the film on in cinemas, even after it had had its airing on TV. [For] the right kind of film, the cinema experience is what people are after […] The question you asked suggests that there ought to be a shift, and that this should happen more and more […] many films these days are breaking the windows, they’re having day and date releases, they’re just not including the TV elements. And that is where this one is a little bit different. But it’s not unusual for a film to be open in the cinema and be available on VOD at exactly the same time; that’s now actually quite common for smaller films.

TM: When Picturehouse formed its three film deal with Film4 back in March, was shaking up the film distribution model something that Picturehouse had in mind?

GS: I think we have always thought slightly differently about distribution because we are coming to it from the exhibition side of things. As well as having 21 of our own cinemas, alongside a further 40 odd that we programme  for, we also have great experience of the exhibition side of the business and we were immediately drawn to the gaps in that business […] we have always been open to mixing things up a little bit. Now, a partner like Film4 who are equally as experimental, and will try something new and are always very much in the forefront of discovering and championing new talent, are also incredibly astute when it comes to the business of film and cinema. So they make for a great partner in terms of thinking a little bit differently about release, and trying different things to maximise the reach and potential for each film. So in that respect, they are a great partner to work with and we have had a fantastic experience to date on both MADE OF STONE, and now A FIELD IN ENGLAND, and of course THE PERVERT’S GUIDE TO IDEOLOGY that is coming up.

… it is exciting to take these risks and to try these things, to shake things up a little bit.

TM: Again, to go back to the experience that Soderbergh had with BUBBLE, the company that distributed the final film on their TV network also owned some of the cinema chains it screened in. You’re in a similar position here in that you are a chain so you’re not being undercut. Is there possibly an issue here that the small films ironically need conglomerate distributors for these schemes to function?

GS: But we’re not exclusively screening these in our cinemas. We are taking this idea, this approach, this release strategy for A FIELD IN ENGLAND and we are taking it to other cinemas – the ICA is screening A FIELD IN ENGLAND, so is the Curzon Soho, the Phoenix Finchley is also screening it. It is playing in non Picturehouse cinemas and I think that those cinemas tend to be like minded in terms of believing that really their customers will want to experience the films in their cinemas […] but there is no question there is the degree of risk for them, just as there is for us. But it is exciting to take these risks and to try these things, to shake things up a little bit. Because I think for smaller films we are trying to raise their profile and make them bigger and ultimately bring a larger audience to them. And that’s the objective here, to say, “What’s the best way to release this film and still get it into cinemas in a cost-effective approach?”

TM: Let’s say this type of multi-platform release is increasingly prevalent for smaller films – do you think eventually this will go hand in hand with the idea of crowd funding productions?

GS: Absolutely. I definitely think that is the natural next step which will link the fascination and the interest with niche products, from the production side of the film right the way through to delivery. I think without question that it will be about audiences demanding to see something in a certain place, and the Kickstarter crowdfunded approach – the missing link is taking that approach and linking it with the cinemas, and I think cracking that is the Holy Grail.

Is there a danger that these releases will just become, to quote  George Lucas, “content on screens”?

TM: Back in 2007 Radiohead released IN RAINBOWS with their “Pay what you want, pay nothing if you don’t want to pay anything” model. At the time it was seen as an exciting development, a future model for the industry, but nobody has really repeated the experiment. Does it take time for these new methods to find their shape?

GS: Yes, these things do take time, but there has been some major movement over the last few years. I think that ultimately we are in a business and all the partners are about making sure that we find an audience for these films but that it is sustainable […] we can’t be experimenting with something that doesn’t work from a business perspective, that’s just untenable, it’s not going to work going forward. Let’s not underestimate the costs involved in bringing a film to market and showing it in cinemas. There is a huge demand out there for films to get into cinemas in terms of the numbers of films that are now released, there is huge pressure to get films into cinemas, so the business side of things is not going anywhere, it’s essential.

TM: In a month from now you’ll all sit down and work out what went right, what went wrong, what could have been changed about A FIELD IN ENGLAND’s distribution, and you’ll cherry pick what works for the next film that seems to fit the bill. But is there a danger the lustre will wear off, and these releases just become, to quote George Lucas again, “content on screens”?

GS: It’s difficult to say, we’ll see. I think we’re hopeful; this is an experiment and we’re hopeful that it is a successful one. We’re working with the BFI who are supporting this release; we’ve commissioned a detailed insight report into the whole process. It’s very much about learning from this, taking what we learn and seeing if we have uncovered another way of bringing a certain type of film to market. And hopefully the results will bear that out as a viable option, and we’ll see more films going down this road. I will certainly say that I can see that if the results do support this, I can imagine us sitting around saying “This film feels like the new FIELD IN ENGLAND approach, let’s look at that as a release”.

A Field in England is released in cinemas nationwide, on DVD, on free TV and on video-on-demand on 5 July 2013.

One thought on “A Field In England: Multi-Platform Release”