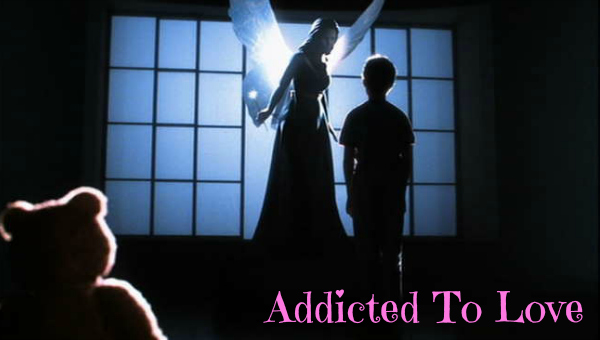 Steven Spielberg’s futuristic, melancholic take on the Pinocchio story is arguably the director’s most uncharacteristic and yet most personal film to date. It might not be an obvious choice for Valentine’s viewing, but this is a tale of unrequited love: maternal love, childhood love, innocent love. The irony, of course, is that the source of this love is a machine, not a man, but that doesn’t stop it from being a deeply affecting fairy tale in its own right.

A.I. examines love in its purest form. As the film’s tagline puts it: “His love is real. But he is not.” David (Haley Joel Osment) is programmed solely to love, forming an unbreakable bond with his surrogate mother Monica (Frances O’Connor), the grieving parent of a biological son who has been put into stasis because of a terrible disease. When the real boy unexpectedly recovers and returns home, he and David compete for the love of their mom. David inevitably loses and is banished from the house, though the separation is an agonising one on both sides. Monica is genuinely distraught, but that’s nothing compared to the heart-rending trauma felt by David: the look of confusion and anguish on his face would surely melt even the most metallic of hearts.

…staying true to its roots as a project inherited from the hands of the late Stanley Kubrick, Spielberg keeps the tone dark…

Yet David’s love is soon proven to the more constant and enduring. His quest to seek the Blue Fairy, in the hope of becoming a real boy and regaining the love of his mother, is ultimately rewarded. After seeing the darker side of humanity in the outside world, with its ‘flesh fairs’ and soulless cities where love (though not sex) seems to be in desperately short supply, he finds the Blue Fairy – a decaying relic in a submerged Coney Island attraction, the victim of global warming. David spends a millennia-spanning vigil under the sea pleading to be made real. And finally he is, in a way: he outlives the human race that built him, becoming its sole heir and representative on earth. The beings that superseded humanity have the technology to grant his wish, so for one beautiful day he and Monica are reunited – she being cloned from a few strands of her hair – and sure enough, she returns his love, just as she always had.

You might think that all this love washing around on the screen might congeal into a syrupy sentimental confection, but no: staying true to its roots as a project inherited from the hands of the late Stanley Kubrick, Spielberg keeps the tone dark with only a glimmer of hope lighting the way. Even the bittersweet end offers little comfort – a transitory happiness quickly fades out to darkness. ARTIFICIAL INTELLIGENCE seems to offer a bleak assessment of love: it inflicts pain whether it is returned or not. But despite the hardship and toil it promises, perhaps that glimmer of hope is enough to make it all worthwhile.

One thought on “A.I. Artificial Intelligence”