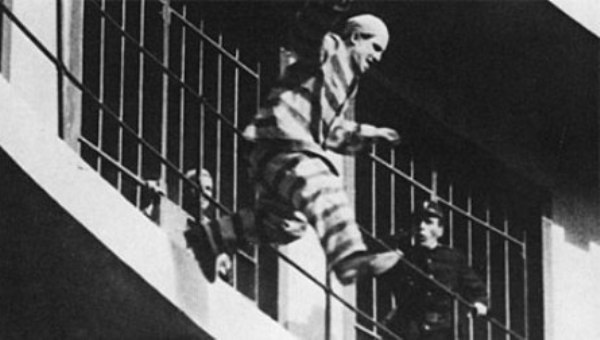 Made in the dying days of the silent era, THE GHOST THAT NEVER RETURNS is proof (if proof were needed) that cinema was exploring some very interesting places before talkies came along and stopped much of its innovation dead in its tracks. This occasionally dazzling Soviet-produced tale of rebellion in South America follows prisoner Jose Real (Boris Ferdinandov) who, after serving ten years inside, is entitled by law to a single day of freedom – a day from which no-one has ever returned alive.

Under the watchful gaze of his parole officer, who has orders to kill him whether he makes an attempt to escape or not, Real takes the train home to his village, where plans are being hatched to overthrow the oppressive regime of the oil company which holds sway in the region. The brutal regime of the prison and Jose’s fraught journey home to his family leave the viewer in no doubt as to where the film’s political sympathies lie. Yet leaving aside its propagandist agenda, it’s not hard to be impressed by the stylish direction of Abram Room. The early scenes set in the prison, with expressionistic use of shadows and camera angles, hint at the nightmarish conditions the inmates are forced to endure.

The conclusion… delivers a surprising amount of suspense, reminiscent of westerns like HIGH NOON that build towards a preordained climax

Jose’s wait for his precious 24 hours on release, even with the knowledge that death surely awaits him before its end, is beautifully played out, as are his first tentative steps in to the world outside the prison’s walls; walking down a long corridor, he savours every detail – a weed growing in the wall, some rubbish blowing restlessly in the wind. When Jose’s wife receives word that her husband is coming home, she runs down the street telling everyone the news – the dizzying movement of the camera amply communicating her ecstasy.

The conclusion, as the parole officer waits in a bar for 7 o’clock to tick round so that he can take Jose back to jail, delivers a surprising amount of suspense, reminiscent of westerns like HIGH NOON that build towards a preordained climax. A shame then that the overly abrupt ending feels like something of a letdown; but it fails to dampen the vitality of the film as a whole.

The marvellous musical accompaniment by the Dodge Brothers and Neil Brand added a good deal to the western feel of the film, their skiffle sounds perfectly complimenting the striking desert imagery. It may belong to the silent era, but this was still a treat for the eyes and the ears.