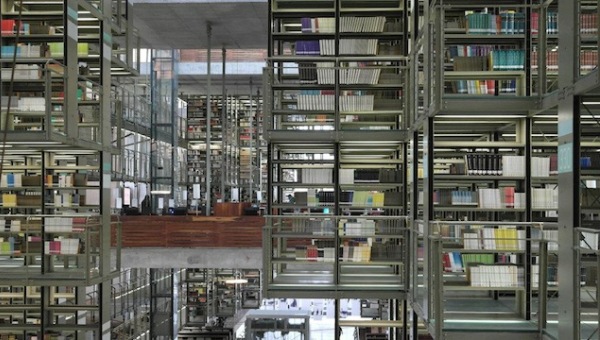 Just how much intellectual property should be placed in the hands of a single entity? And who exactly should profit from it? It’s a moral dilemma that Ben Lewis’ compelling documentary attempts to pick apart through an investigation of Google’s digital books project. Inevitably it fails to explore the issue in as much depth as the subject truly deserves, but given the importance of the debate, Lewis should be applauded for getting it this far into the public eye. After all, the decisions being made now about how far one company can go in publishing any book it chooses may have far-reaching consequences for us all.

In attempting to raise the alarm about Google’s questionable business practices, the director occasionally threatens to veer in to polemical hysteria. The ‘World Brain’ of the title is a reference to H.G. Wells’ vision of a futuristic super-library that contains all the world’s accumulated knowledge. The concept has immediate appeal, of course: the idea that any book from any author should be available to anyone in the world is so laudable it would seem to be beyond reproach or criticism. In practice, there are enormous, possibly insurmountable obstacles, of which the chief one is: who should control this brain? Wellsian science fiction becomes Orwellian dystopia, as fears of a massive corporate entity holding a monopoly on human knowledge start to creep in.

Numerous people from some of the most prestigious academic institutions around the world pop up to talk about how they were approached by Google, and how exciting the project initially seemed, before they eventually realised that Google might eventually want to make money out of them. What triggered this lightbulb moment was the realisation that they were scanning in millions of works still in copyright without the owner’s permission. This triggered legal action in the United States, and the film follows this through to a final outcome of sorts (though in reality the legal disputes continue, whilst the market continues to expand). Authors in particular were aggrieved that nobody thought to ask them for permission. Some of them question the secretive nature and quality of Google’s scanning teams.

Google’s bullish attitude was, according to the director, to see the project through as far as possible and deal with the ramifications later. Certainly that’s what the authors and lawyers here seem to agree on, and one has to wonder just how they were allowed to get so far without anyone asking questions. What makes the film more than just an anti-capitalist rant is that it places Google Books in the context of the entire history and development of libraries; how civilization has always treasured knowledge, and mourned its passing when it becomes irretrievably lost. This is what made Google’s offer to digitise a library’s entire collection free of charge too good to miss for many – and who could argue with them?

Apart from a few words at the end about how Google’s competitors are seeking a slice of the digital books market, the film fails to address similar concerns with other organisations who are trying to make money from other people’s works and information. Interestingly, the US government comes out in a reasonably positive light by the end – presumably because revelations about the NSA’s PRISM surveillance programme surfaced after its completion. At least one person acknowledges that without Google’s enterprising spirit, the whole digital books idea would never have got so far so quickly; and this has spurred on similar projects with less commercial ends in mind. GOOGLE AND THE WORLD BRAIN is a provocative assessment of a fascinating turning point in the long history of books and libraries.

One thought on “Google and the World Brain”