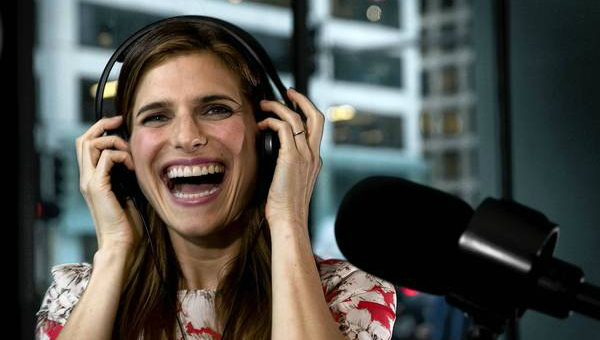 Lake Bell is an engaging actor, with decent comic timing, but her status thus far has been largely limited to supporting roles in underwhelming films – destined to incrementally improve the films or TV shows of others whilst gaining little credit for doing so. However, that is likely to change with the amiable and funny IN A WORLD. Although a bit rough around the edges, with her directorial feature debut Bell proves she is adept behind both the camera and the scriptwriters pen. IN A WORLD is a witty film that makes an impact even if the conclusion lacks catharsis.

Bell plays voiceover artist Carol Solomon, the daughter of highly successful voiceover artist Sam Soto (Fred Melamed). She struggles to find work beyond accent coaching, leading to the humorous sight of Carol surreptitiously recording anyone with a slightly interesting voice. The industry is abuzz with the news that a major new ‘quadrilogy’ (a very faintly disguised HUNGER GAMES parody) is to revive the famous trailer intro “In a world…”, making it a highly coveted slot. Amongst the contenders are Gustav Warner (Ken Marino), a comparatively young pretender to the throne, whom Sam has taken under his wing. Carol, however, is keen to prove her father and the rather sexist trailer voiceover fraternity wrong, by grabbing the gig herself.

Bell’s script [takes] aim at industry sexism without being seminar-like about it.

Bell’s script is crammed with sort of low-key zingers that populate the likes of Seinfeld or Woody Allen’s work. However, in contrast to those sources, Bell’s script is distinctly female in perspective, taking aim at industry sexism without being seminar-like about it. The male characters bemoan the old days (“[women are] flying planes, they’re taking jobs!”), when it was all about “how quickly they could get their panties off”. In amongst the amusing skits and humorous prodding of neanderthal attitudes, it somehow has time to deal with the more cynical side of gender politics and domestic drama.

Above all, IN A WORLD… is amusing and retains a clarity of purpose that engages us with the characters first and foremost. That isn’t to say it doesn’t take a while to settle, with the initial stages perhaps a little disjointed. As a result the film has the feeling of a directorial debut, but the overall tone is a fresh one and is better for it. Marino is once again excellent as the overly confident Gustav, and Bell’s Carol is a witty lead balancing a difficult mix of optimism and cynicism. Despite a slightly limp finale, the sharp dialogue and comedy drives the film for its fairly brief run time.

An accomplished feature debut, IN A WORLD… shows there should be more to come from Bell as writer/director. In breaking out from constant supporting turns, it seems the best material for her may come from her own pen.