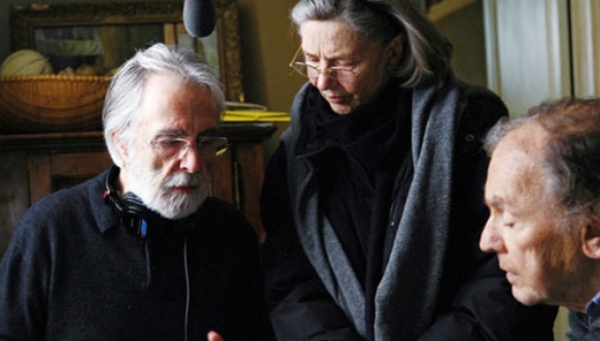 The work of Michael Haneke is not something easy to categorise; and he, as an artist, is not an easy man to pin down. Over the past twenty five years the Austrian director has created a wealth of critically acclaimed, and occasionally controversial films which have inspired comparisons with Brunel and Bergman. These films are emotional tour-de-forces which explore the nature of suffering and secrecy, but which are always presented in a palpable, grounded reality.

Shot in a fly on the wall style, Yves Montmayeur’s MICHAEL H. PROFESSION: DIRECTOR traces Haneke’s evolution backwards, starting with his latest Oscar-winning AMOUR, and working through his films; from the sombre, eerie drama THE WHITE RIBBON to the surveillance thriller CACHE and the vividly divisive and controversial FUNNY GAMES, which first brought him worldwide fame. While the structure of the documentary is perhaps a bit lazy – a simple film-by-film reverse chronology – the insights, interviews, and backstage footage are a fascinating glimpse into multiple Palme d’Or winner’s working method, showing him as a consummate professional with an almost child-like enthusiasm for his profession and craft.

The first thing that is apparent from PROFESSION: DIRECTOR is that when he gets behind the camera, Haneke is a meticulous perfectionist, often shooting and reshooting scenes over and over again until the performances match his vision. “He has fun. We don’t. We are very afraid and tense,” says Emmanuelle Riva, the BAFTA winner of AMOUR. Co-star Jean-Louis Trintignant agrees, describing the director’s approach as “tyrannical”. When quizzed on this, Haneke explains that he is a craftsman, whose goal is to do things as well as he possibly can. During the shooting of a particularly complex eight minute shot in CODE UNKNOWN, the director struggles to get the take he wants and shoots over and over again until the sequence is perfect. By the time he is done, we can see the exhaustion on the cast and crew’s faces; their cheers less to do with the fact that they’ve got the shot their director wants, and more to do with relief that they won’t have to do it all over again.

PROFESSION: DIRECTOR seems to evoke a man who, just like many of his films, is both contradictory and elusive

However, far from the sombre, stand-offish perfectionism that people associate with the likes of Woody Allen or Stanley Kubrick, the documentary reveals that Haneke is very much an actor’s director, throwing himself into rehearsals, listening to his cast members, feeding off their insights and collaborating very much as equals. During rehearsals he takes a hands-on, tactile approach, relishing every opportunity he can to join in the performance. It comes as no surprise when it is revealed that he was an aspiring actor in his youth before he turned to directing.

He is particularly intuitive to the spirited enthusiasm of children, which perhaps explains the fantastic performances given in THE WHITE RIBBON. A particularly sweet scene shows him encourage one of his child actresses to air guitar along to the riff of Smoke on the Water, in what one assumes is to coax a sense of confidence out of his young performer. Afterwards, as Haneke claps and laughs encouragingly, the girl bashfully admits that she doesn’t like everyone watching her.

Adding to these fascinating backstage insights are various interviews with Haneke, as he is encouraged to analyse his own work. However, he is a difficult interviewee, and is very wary of any preconceptions that people may have in their questioning. PROFESSION: DIRECTOR evokes a man who, just like many of his films, is both contradictory and elusive. More than once he amicably refuses to answer a question that he feels is trying to twist his words or draw him down a line of questioning he feels is inappropriate. He also rejects the notion that his films are psychological or for clinical dissection, saying that too many critics assume that films are reflections of an artist’s psyche. Later he confirms that he doesn’t need a psychologist because he is able to exorcise all his fears and anxieties out in his films. He also admits that the endurance of suffering, whether personal or vicarious, is a principal theme in his work; but he then rejects any notion that critical opinion of his films should start with his own psyche. He’s not always consistent with his arguments, but he’s such an eloquent and interesting person, it hardly matters.

Our thanks to Curzon Soho