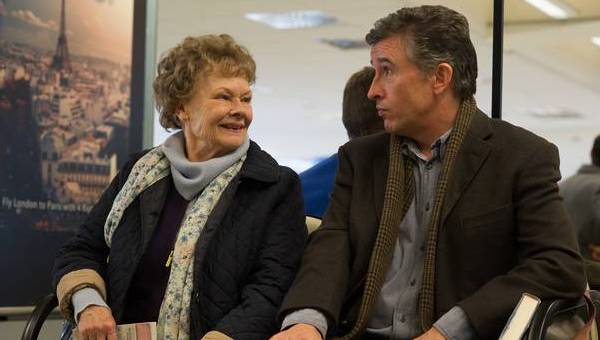 Steve Coogan and Judi Dench have to be among the more unlikely of odd couples seen on the big screen in recent years – uniting Alan Partridge and M sounds like one of the Norfolk DJ’s more outlandish fantasies – but the combination works beautifully in PHILOMENA. This perfectly pitched dramatisation of Martin Sixsmith’s book walks the tightrope of comedy and pathos with such precision that there is no doubting the sure hand and light touch of an experienced director.

Take a bow then Stephen Frears, whose earlier MADE IN DAGENHAM similarly tackled serious issues camouflaged as comedy; he allows the story to unfurl gently yet effortlessly, letting each new twist surprise and quietly enthrall. But the true star of the show is Coogan’s script, co-written with Jeff Pope. Their careful approach to the narrative serves it perfectly, beginning in the drab surroundings of London as Sixsmith (played in a measured performance by Coogan) struggles to find a new career direction in the wake of a political scandal. At a reception he stumbles upon the “human interest” story of Philomena Lee (Dench), an Irish expatriate and staunch Catholic whose infant son, born out of wedlock, was forcibly taken away from her while she lived in a convent and became the adopted child of an American couple.

After several fruitless attempts at tracking him down herself, Philomena’s search for her son reached a dead end. Enter former journalist Sixsmith, who sniffs enough of a potential story to get his writing career back on track, though with little hope of a positive outcome. But as he roots around the murky past of the Catholic institution, and makes further discoveries abroad (remember this is a story best discovered in the telling), he learns that truth really is stranger than fiction. It’s a remarkable tale, and Frears deliberately avoids any outraged indignation or emotional wrecking ball scenes in favour of sombre reflection, leaving the audience to wrestle with the moral dilemmas of the piece, which works entirely to the film’s advantage. It’s difficult not to be moved by the facts of the case, but, like Coogan’s Sixsmith, it’s nigh on impossible not to be impressed by the stoicism of Philomena. Her mixture of British upper lip and Celtic zeal runs through the film like a spine of steel, and her reaction to the eventual outcome is nothing short of staggering.

All the way through what is basically an extended road trip, the occasionally awkward yet curiously tender relationship between story-chasing writer and grieving mother is beautifully portrayed by both stars. Coogan is never better than when mining uncomfortable pauses for comedy, and he reinvents Sixsmith as a man buffeted by fortune now looking for a clean break, finding it in a story that forces him to confront his own prejudices. If his character’s arc is a mite conventional, it still rings true, and his weary cynicism works brilliantly as a foil to the optimistic but rational Philomena.

But best of all is Dench: it’s difficult to think of anyone else who could have played Philomena quite so touchingly. The actress has always excelled with strong-willed characters (and the Academy agreed), but here adds a subtle layer of homespun eccentricity amid hints of the long-buried pain which occasionally break through. Her carefully crafted attitude to life – still guided by her faith – contrasts with that of Sixsmith, who only grasps the magnitude of his story when it’s staring him in the face. It’s an inspired onscreen partnership that moves as much as it amuses; director, writers and stars all deserve kudos for delivering a real crowdpleaser.