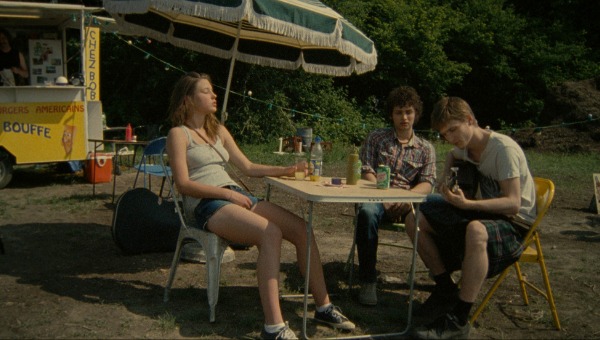 PIECES OF ME, French director Nolwenn Lemesle’s first foray into feature-length filmmaking, is a very astute account of teenage angst.

Erell (Adéle Exarchopoulos) is an undulating tidal force of irrationality and instant regret. She resents caring for her MS-stricken mother Christine (Zabrou Breitman), baselessly regarding her as a neglectful tyrant. Erell’s father Edern (Tchéky Karyo) is the social adhesive that binds together a household which is at loggerheads. He’s a clumsily comical figure without whom the family would be completely joyless. The film chronicles a year in the life of Erell, switching between beautiful analogue cinematography used to depict the objective world, and handheld digital footage to show the subjective world that Erell constructs for herself as an amateur filmmaker.

Erell is hardly ever without her camera, ostensibly putting together the ‘pieces’ of herself referenced in the film’s title. A long-lost sister returns unannounced heavily pregnant with a new husband; her mother has ugly turns of illness that result in bouts of time spent in intensive care; and all the while Erell and her friends – a ragtag group of misfits – try to come to terms with their existential place in the world.

The filmic references Lemesle makes in PIECES make for an odd mix: she nods to AMÉLIE with the amber filters which have become obligatory in French cinema, and by using Erell as the narrator. The heaviest influence, however, is AMERICAN BEAUTY. An early scene sees the family sharing a despondent dinner, in a one-take long-shot cinematic set piece that is almost a second-by-second reconstruction of a Burnham household dinner. The reference is understandable, as Erell is practically an amalgam of Jane Burnham’s parent shunning and Ricky Fitts’ constant filmic documentation of the world as a way of understanding it – aspects Lemesle related to in BEAUTY, and perhaps wanted to position herself inside semi-autobiographically.

PIECES OF ME can pride itself on its cinematography and its performances, particularly those of Breitman and Karyo. Exarchopoulos’ Erell has a palpable openness which lets the viewer see the character’s every nuanced motivation and thought; she is no doubt a highly relatable character to audiences of her demographic. The problem is that an older audience hoping to understand Erell may be at a loss. She is anything but selfless, and the gravity of her mother’s illness often seems to escape her; and she seems to be intentionally escaping it as some sort of coping mechanism. The friends with whom she associates are pale in comparison, and decidedly less likable. One particularly heinous character is the woefully-acted Duncan, a kilt-wearing English member of the group who has seemingly never been to Britain. He joins the burgeoning ranks of characters in overseas media that offer a twee misrepresentation of British culture. A similarly shallow scope is used to explore many other young cast members. A boy is put in foster care after his father and brother are abusive toward him; another lives in a caravan with his mother, whose violent partner attacks their home with a sledgehammer. But we only know about these potentially rich dramatic characters because we are told about them in voice-over. We’ve done no legwork as an audience, and there is consequently no reward.

Although PIECES OF ME is hampered by a few poorly rendered characters, there is a good film here: a promising eye for cinema, some excellent performances and an understanding of a young person’s directionless anger and naïve grasp of social construct.

3 thoughts on “Pieces of Me”