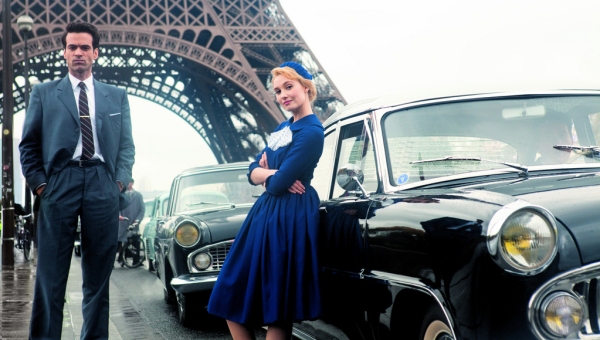 ‘THE ARTIST meets Mad Men’ announces the poster for POPULAIRE. It also meets MY FAIR LADY, ROCKY, THEY SHOOT HORSES DON’T THEY and, almost insolently, VERTIGO. Not to mention 8 WOMEN, POTICHE and FAR FROM HEAVEN in its loving, indeed almost obsessive, re-creation of a period and its mood. Here we are in 1958, following Deborah Francois’s Rose Pamphlye as she leaves a small town in Normandy, her father’s shop and his domineering demands that she marry a local mechanic. She arrives in a slightly larger town to be interviewed as secretary to local insurance agent Louis Échard (Romain Duris).

Aside from her obvious easy-on-the-eye talents – which as we know counted for a lot among male executives in the late 50s – Rose possesses only one that’s of any real use: she can type. And so the plot lifts off into the frenzied world of speed-typing contests: first regionals, then (in proper Glee style) nationals and finally international, as Rose humps her beloved typewriter around, its weight symbolizing her quest to have ‘everything a modern girl dreams of’.

POPULAIRE is a piece of primary-coloured confectionery in every department

And in case we were in any danger of forgetting this, every stage of the bumpy relationship between Rose and Louis is underscored by ‘Forgotten Dreams’ Leroy Anderson’s nostalgic and melancholy melody, a parental radiogram favourite of the time. Louis himself is a strange brew, his stiff Henry Higgins-like behaviour tempered with regret for a thwarted sporting career, smouldering passion for his best friend’s wife (THE ARTIST’s Berenice Bejo) and a dubious, almost Don Draper-like war record which he carries around like a piece of shrapnel in his leg. His coming up against the equally complicated Rose (Francois turning on the inscrutability she used to devastating effect in THE PAGE TURNER) creates a chemistry that carries the film through its frankly conventional, if well-crafted, plot developments.

As may be inferred from all of the above, POPULAIRE is a piece of primary-coloured confectionery in every department, from the story through to the costumes, art direction, lighting and music, all of them the equivalent of a pleasurable warm (not hot) bath. THE ARTIST showed it was possible for a movie to get by on sheer charm; POPULAIRE offers more of the same, with a tongue-in-cheek dash of social history (who would have thought that the Eureka moment of inventing the golfball typewriter would cement Franco-American relations and ensure a happy and tidy ending for the adorable principals?).

Of course, a more interesting but equally French movie could have been made had Louis sacked Rose for sheer incompetence at the outset, sent her home to her mechanic and spent the rest of the story pursuing Marie his true love and exorcising his demons, but it seems unlikely the Weinstein Company would have thrown their distribution weight behind that. And anyway, it would have meant denying us the pink Populaire typewriter and the blissfully staged typing-based songs and commercials that envelop Rose at the height of her fame, when she finally does have everything a modern girl dreams of. Well, almost everything.

One thought on “Populaire”